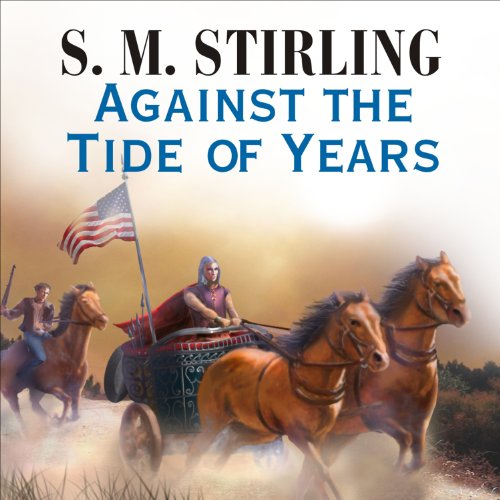 Against the Tide of Years

In the years since the Event, the Republic of Nantucket has done its best to re-create the better ideas of the modern age. But the evils of its time resurface in the person of William Walker, renegade Coast Guard officer, who is busy building an empire for himself based on conquest by technology.

When Walker reaches Greece and recruits several of their greater kinglets to his cause, the people of Nantucket have no choice. If they are to save the primitive world from being plunged into bloodshed on a 20th-century scale, they must defeat Walker at his own game: war.

Against the Tide of Yearsに寄せられたリスナーの声

great book, I wish there was a pause

Loved everything, my only complaint is: a lack of pause between sections in the same chapter.

loved the story. would love to see a more definite break between settings. got confusing sometimes

You can't beat this series

I loved this series when I read it in papareback and loved hearing the voices come alive even better. You will not be dissapointed, But you wil have to buy all three, LOL.

Great Story... WHO got picked to read it?

What did you love best about Against the Tide of Years?

2/3 of the way through the book. So far, pretty engrossed in this trilogy. Very intriguing and attention holding.

The blacksmith that was kidnapped. What do ya do?! Realistic.

Todd... if the book is rather military, you need to know military pronunciation! Corpsman is pronounced 'COR'man'.... not 'CORPSman'. And the 'Mogollon Rim' is the 'MOH'ghi-ahn' Rim.

Sorry pal... but you took the job to read this kind of story - need to get it right. Your voice grates on my ears now!

The whole story is moving. Many different facets developing simultaneously.

great storytelling but needs an editor

these are all gripping stories. My only complaint is that some judicious editing would keep the action going - I do sometimes tune out under the weight of all of the lovingly detailed descriptions. still well worth a listen, though!

Amazing Series for an Apocalyptic Nut

SM Stirling keeps you on the edge with baited breath rooting for the good guys of Nantucket and loathing William Walker and Alice Hoang.

Todd McLaren does a masterful job of narrating this story and the Emberverse story line (Dies The Fire).

After listening to all 3 books in this series (each at least 5 times), I would love to see it continued with Alston and Swindapa’s daughters, Coughlin and Martha’s children and Walker’s spawn.

great but jumped all around

One of the best alt-history books ever.

This series is superb. If you like "Yankee in King Arthur's Court" style time travel, this is prime material.

I've read a lot of SM Stirling. If you like alternative history, you'll like this. He does a better job of sticking to the story arc than he does in the Emberverse series.

exactly as when I read it

against the tide of years with a wonderful read with exceptional storytelling and a wonderful narration. it conveys a rich and vibrant history full of nuances and cliches that are all together not unwelcome. the character development of both the Nantucket arc and the Walker Kingdom both flourish however the Walker Kingdom is sort of neglected during the second part of the book I wish that it had been more fleshed out but all in all a very very good listen and an even better read. be warned once you start listening if this is your cup of tea you won't be able to put it back down again not until you've listened to all three. can't wait to start the very last one.

Love the storyline and the narration. But here's where the weakness of audio book shows: with unfamiliar sounding names and scenes from many places happening, its a bit difficult to turn back a few pages to review about what happened to who.
Now trying to put those questions behind me, move on and find out what happens next.

loved the story, the names and countries a bit confusing already loaded the third part

I must have read the paperbacks already four times. The Audible books are better with excellent naration