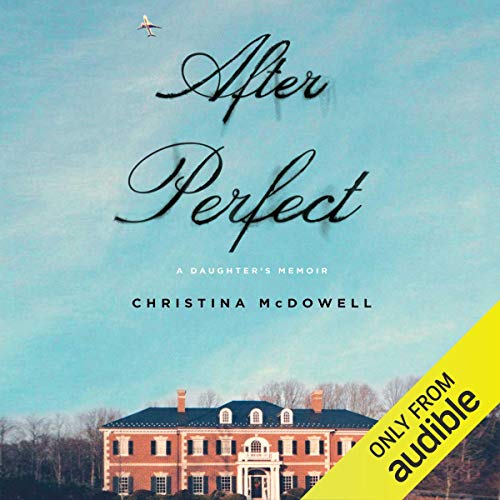 In the tradition of New York Times best sellers What Remains by Carole Radziwill and Oh the Glory of It All by Sean Wilsey, Christina McDowell's unflinching memoir is a brutally honest, cautionary tale about one family's destruction in the wake of the Wall Street implosion.

Christina McDowell was born Christina Prousalis. She had to change her name to be legally extricated from the trail of chaos her father, Tom Prousalis, left in the wake of his arrest and subsequent imprisonment as one of the guilty players sucked into the collateral fallout of Jordan Belfort (the "Wolf of Wall Street"). Christina worshipped her father and the seemingly perfect life they lived...a life she finds out was built on lies. Christina's family, as is typically the case, had no idea what was going on.

Nineteen-year-old Christina drove her father to jail while her mother dissolved in denial. Since then Christina's life has been decimated. As her family floundered in rehab, depression, homelessness, and loss, Christina succumbed to the grip of alcohol, drugs, and promiscuity before finding catharsis in the most unlikely of places. From the bucolic affluence of suburban Washington, DC, to the A-list clubs and seedy underbelly of Los Angeles, this provocative memoir unflinchingly describes the harsh realities of a fall from grace. Full of '90s nostalgia and access to the inner circles of the Washingtonian societal elite, Christina McDowell's beautiful memoir is a Blue Jasmine story from a daughter's perspective.

This memoir details the loss of extreme privilege. But, by the end, I wasn't sure that the writer was missing wealth/father/childhood privilege as much as basic common sense/intelligence. Frustrating. I'm glad I listened to it, but I'm not sure I recommend it. If anything, it's a cautionary tale of the extensive damage that can be done to children when money takes the place of love in a "perfect" childhood that was built on greed and being better than the neighbors. Hmph.

FAR too much name-dropping

Not really. I thought I would read about introspection, but it was all about the glitzy perfect life with celebrities that poor Christina and her family had to give up. She portrays herself at completely naive, while still portraying the good life and all the name brands she can fit into the book.

I hoped for MUCH more from this book. Perhaps the Amazon reviews made it out to be better than it was, but I wasultimately disappointed.

The story was very interesting and well written. I did not care for Chistina McDowell's voice as she read it- it came off a little whiny and was at times irritating to listen to. But I finished the whole thing and I'm glad I did.

Puts a Face to the Headlines

I always asked myself what family members of those involved in seedy Wall Street dealings did and how they felt after the news broke - this book is an absolutely splendid description of one family's struggle to find happiness, after perfect.

This is a great real life account of searching for purpose and meaning, and realizing that sex, alcohol and drugs won't bring those things.

Entertaining enough and interesting story. This chicks "hardships" get annoying though...("all I had left was my BMW") Some of the situations are so cliche it kind of reads like a novel. I'd recommend it though for anyone who likes this "personal account" genre.

It belongs in Oprah's Book Club

One of those true-life stories that reads like a novel. The life lessons Christina learned through her tragedy transformed her into a soulful being, which is how this life story (which peripherally ties to the Wolf of Wall Street movie) becomes inspirational. Among Christina's virtues, which I agree is a Carole Radziwill style, is her voice. At first I found it monotone, but realized later her tuneless opening was intentional, creating a stark/more realistic backdrop to the life of riches that should have been exciting. Her lilt develops as the book goes on, and it is probably the best reading of a book I have heard...she has a gorgeous, hypnotic voice. The book is a great story for anyone, but particularly for the successful, where it is easy at times to forget that the pursuit of business victories and the material rewards that result can mask the real lessons people are put on this earth to learn.

My 1st review after 2 years of audible

I've listened to close to 100 audible books over the past few years and this is my first time writing a review. This book was so good! I couldn't stop listening to it; it was just really gripping. I loved it. The author was also the narrator, so I was prepared to find the narrating sub-par since it wasn't a professional, but she was actually extremely good. If she doesn't write more books she could easily go into a career of narrating audible books, that's for sure.

Makes me feel Grateful for having less money

Powerful in the illustration of the unsung victims of white collar crime. I wonder how many people ever hear a story of white collar crime, see the pictures on the news of the family who seems to have everything, and then think of the tragic effect on the children. Christina McDowell shares her story with such honesty. Truly a tale of tragedy to survival to triumph.

First I have to say, I am generally a fan of autobiographies and memoirs. I learn so much from listening to others' journeys. I think what I liked best was the realness of the pain, denial and coping mechanisms Christina so openly shared.

What does Christina McDowell bring to the story that you wouldn’t experience if you just read the book?

I always get more when I listen directly from the author.

My only extreme reaction was the apparent dissolution her father displayed throughout her story. I read the summary court opinion on his appeal back in 2014 based on the Janus case. It's clear he still doesn't own his behavior or actions.