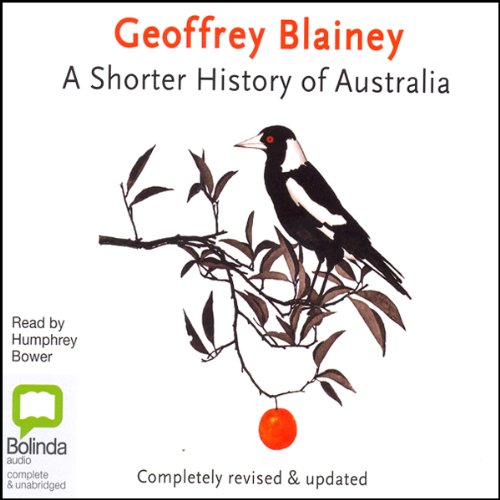 "Part of Blainey’s magic is that his words float off the page. Here, too, are the puzzles, oddities and off-beat comparisons of his restless, quirky intelligence, constantly astonished and endlessly engaging." ( The Age)

After a lifetime of research and debate on Australian and international history, Geoffrey Blainey is well-placed to introduce us to the people who have played a part and to guide us through the events which have created the Australian identity: the mania for spectator sport, the suspicion of the tall poppy, the rivalries of Catholic and Protestant, Sydney and Melbourne, new and old homelands, the conflicts of war abroad and race at home, the importance of technology, the recognition of our Aboriginal past and Native Title, the successes and failures of the nation.

For this enlarged edition, Blainey has rewritten or expanded on various episodes and themes, making changes to almost every page. He has described significant events and trends of the early-20th century. A final chapter summarises key factors that shaped and still shape this country's history.

A Shorter History of Australiaに寄せられたリスナーの声

As expected the book is not detailed, but it covers the history of Australia in a amazing way. I deeply recommend it for everyone interested in Australia.

Enjoyable chronology of the history of Australia

What did you love best about A Shorter History of Australia?

Covered a wide range of key events in Australia's history. The book was easy listening and well written for those interested in a brief history lesson.

What other book might you compare A Shorter History of Australia to and why?

Hard to compare because it deals with many subjects in a short space of time. My feeling would be that if you enjoyed this book you would also enjoy books like Kakoda and even Mathew Flinder's Cat (fiction)

Always a great Narrator for any Australian story - didn't disappoint.

This book helps you to understand today's Australia by describing where we have come from. I found it fascinating. Well worth a listen.

GoodBook for someone planning a trip to Australia

The book starts at the ice age and continues through 2009. It does a nice job of concise presentation of climactic, cultural, environmental, political, International, etc. information about the country, its people, and its history. Having read it will make my trip there much more interesting because I have a flavor of what has gone before, Who the people in the country are. I was relieved the book did not go into exhaustive detail about anything.

Excellent History of Australia, covered the entire past of the county. Australian history is quite similar to American Western History. It isn’t overflowing with large conflicts but has many small but interesting and meaningful conflicts. It is a story of settlement, economic growth and depression, political movements, immigration and participation in world wars.

The book is a shorter history of Australia and does gloss over many historical events in the country. However it gives enough to do them justice. Australia was clearly a very blessed country with an easier and less deadly history than most other countries. It was nice to read about such a successful nation but the story did feel like maybe it missed some dramatic struggles. That is however not the authors fault.

This book has few negative reviews that complain about a the way the author talks about the indigenous peoples of Australia. These reviews first made me hesitant to read the book and caused me to put it off. However after reading it I thought the author was quite respectful to the Aboriginals. But I will admit his tone was slightly paternalist with them in way that would have be normal when the book was written in the 90’s. Though in todays more politically correct era this could turn some people off. I however thought he covered the topic with enough grace and wasn’t offended.

If you are interested in Australia this is easily the best audiobook to get about it’s history. It is highly worth a listen.

Book okay. nothing extraordinary, but essential matters covered. I have now a pretty good grasp of Australia's story. Especially appreciated is the lack of bias about Aborigines vs settlers. The narrator's accent I found often impenetrable (BALL or BOWL) but lively.

Would you try another book from Geoffrey Blainey and/or Humphrey Bower?

Would you ever listen to anything by Geoffrey Blainey again?

No. I was really interested in getting an overview of Australian history. The author indicates that he's attempting to be objective and balanced about the tensions between Aborigines and white Australians, but the paternalism is so thick I struggled to get through the first couple of hours and then gave up. For example the author states that establishing large areas of protected land for the indigenous people of Australia never would have worked because inevitably they would have been drawn away by the bright lights of the big city. Really? Really? That's so brutal, I'm not even really sure how to respond to that. There are many, many other examples. I think the author is genuinely trying to be balanced, he's just coming from a perspective that is already so far gone it's not much help.

What would have made A Shorter History of Australia better?

This book begins with a disclaimer from the author stating his book was a collection of his own opinions about Australia. Anyone reading this book for historical facts needs to find another resource. It irritated me when he writes Australians thought this and that. He does not back up any of his statements with statistics. He is also rather paternal and imperialistic when writing about the Aboriginal Indigenous Australians. Be warned this book might make you mad too! I have traveled to Australia and truly wanted to increase my knowledge.

Interesting overview of Australia's development starting with Aboriginal settlement and adaptation to the land over 40,000 years ago and ending with Kevin Rudd's first stint as Prime Minister of Australia. Despite numerous developments since then, the bulk of this history - surveying such issues as colonisation, (somewhat limited) discussion of dispossession and violence against the Aboriginal peoples, participation in the first and second world wars, immigration, agricultural and natural resource exploitation and development, infrastructure development, urbanisation, sport as core to Australia's identity.

Blainey does a good job of surveying the big picture issues, illustrated at times with more detailed and personal stories, and general insights regarding politics, economics and history. As somebody who grew up overseas (and didn't learn much about Australian history at any earlier stage of my education) I found this informative, well written, engaging, and a good overview.

Blainey's work has been critiqued within the so-called "history wars" - reflecting the debates and contests about the degree of violence and dispossession suffered by Australia's first peoples. Blainey seeks to present a "balanced account" - but this just touches on the degree of contestation and dispossession that occurred and the current challenges within Australia. I would have been interested to hear still more on the important land rights decisions of Australian courts, the ongoing challenges to Australia's economy, the problems inherent in climate change denial, the harms of alcohol despite it being so throughly intertwined with day to day life and its narrative in Australia.

Well worth a listen!

Logically structured but not without interesting unpredicatable facts, appropriately personal, balanced and comprehensive cover and you get the feeling the author is Australian but at the same time fair and impartial. The reading performance was imaculate, well-paced and clear as a bell.

Very interesting book. Puts into perspective how much the isolation and climate of Australia played in determining its history. Good use of anecdotes to keep it light in parts. Disappointed that the Stolen Generation was not mentioned

Geoffrey Blainey has the ability to write history in such a manner that entices the reader to be be completely absorbed and interested in his knowledge. He gives a comprehensive overview of Australian history from the First Fleet, Aborigines through until 2009.
The book revived school lessons learned of long ago and I learnt new facts and gained answers of unanswered questions.
It also will help me with researching my family history.
For anyone wanting an overview of Australian history, I would strongly recommend this book.
The narrator, Humphrey Bower immediately envelops the reader into the story with his very pleasant voice.

Bower does a great job narrating this short history of modern Australia. Wish it could be on the required reading lists for all Australian school students.

Countless omissions on Indiginous history throughout, author could benefit from referencing Dark Emu and The Biggest Estate.
otherwise comprehensive summation

A pretty upfront and easy to follow summary of the forces that shaped Australia. highly recommend!

concise but thorough. a very fair and balanced history without obvious bias. easy listening. I thoroughly recommend this book to all Australians who want to know how we became the nation we are.

For a new migrant to Australia while this gives you a great summary of the country’s history, it leaves out some very important events and details that I would have loved to know more about. Like the stolen generations, the industries other than mining and wool that have had an influence. Barely a line or two about the history of the sporting teams which is such a big part of the country’s culture. Nothing mentioned about the famous criminals like Chopper Reid, Milat, the bike gangs and mafia that is so intrinsic to our culture.

What a history, is that of Australia.

Really enjoyed the detail and the ability to look up the information and find sources and the read was easy to listen to.

My fisrt book on Au history. loved the book.

I moved to Au in 2005 and was always eager to find books on Au history.
this was a perfect summary and i enjoyed learning about the highlights of this country's story. recommend it to all migrants like myself.

a worthwhile introduction to Australian history

There are some very good insights contained in this abridged version, but ultimately it disappointed due to its lack of detail and almost newspaper-like rapid fire treatment of the last 50 years.