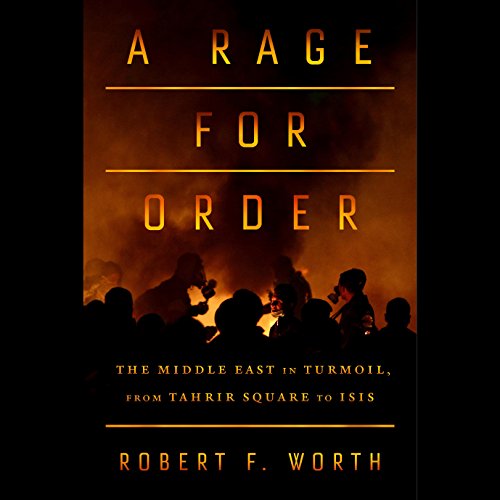 A Rage for Order

The definitive work of literary journalism on the Arab Spring and its troubled aftermath.

In 2011 a wave of revolution spread through the Middle East as protesters demanded an end to tyranny, corruption, and economic decay. From Egypt to Yemen, a generation of young Arabs insisted on a new ethos of common citizenship. Five years later their utopian aspirations have taken on a darker cast as old divides reemerge and deepen. In one country after another, brutal terrorists and dictators have risen to the top.

A Rage for Order is the first work of literary journalism to track the tormented legacy of what was once called the Arab Spring. In the style of V. S. Naipaul and Lawrence Wright, the distinguished New York Times correspondent Robert F. Worth brings the history of the present to life through vivid stories and portraits. We meet a Libyan rebel who must decide whether to kill the Qaddafi-regime torturer who murdered his brother; a Yemeni farmer who lives in servitude to a poetry-writing, dungeon-operating chieftain; and an Egyptian doctor who is caught between his loyalty to the Muslim Brotherhood and his hopes for a new tolerant democracy.

Combining dramatic storytelling with an original analysis of the Arab world today, A Rage for Order captures the psychic and actual civil wars raging throughout the Middle East and explains how the dream of an Arab renaissance gave way to a new age of discord.

With an introduction read by the author.

I'm sure there have been plenty of books published offering a by the numbers for counting of events that have occurred since the Arab Spring, but this one distinguishes itself due to the author's literary flair, access to interviews with elites across the political spectrum due to his status as NYT bureau chief, and knack for finding ordinary people with extraordinary stories to offer a worm's eye view of history.

Required reading/listening for anyone who cares about the contemporary world

This book is the result of an amazing amount of research and reporting. Worth spends time in each of the battleground nations and gets to know many of the leaders and participants of the varied liberation movements. He traces the movements from idealism and elation to cynicism and despair. Because of the jumping around from nation to nation I decided to read along with the print version do I could better keep track with who is who. This is not s knock on the narrator who is excellent. The theme is a rage for order and so me to maintain the order in my own brain I found it helpful to have the hard copy to refer to. Anybody who wAnts to make assertions about what is happening in the Middle East and what should. E done about it should read and/or listen to this book. There are comprehensive books on each of the movements including ISIS but this is the best in putting the Arab Spring into a collective context. A+

This is an unbiased account of what went on in the so called Arab Spring countries. As an Egyptian i concur with the Beltagy story, his story continues and what is happening to him and his family till now is outrageous.

The book made it abundantly clear that the conflict in the Middle East is not just between Jew and Muslim but between Muslim and Muslim. The book attempted to cover the Arab spring as it unfolded in different countries. Because that story is so intricate, it might have been a better idea to just concentrate on one country. That being said, I would recommend the book as an overview of the current tumult in this sad and troubled part of our world. The narrator did a fine job of telling the story.

Captivating storytelling approach to the Arab uprisings and their aftermath

Captures the Arab uprisings and their aftermath in Egypt, Tunisia, Syria, Yemen and Algeria via captivating narratives from individuals directly involved in the events. The author still incorporates some analysis and historical context, but primarily allows the listener / reader to experience life in this tumultuous time via the stories and experiences of people in the center of it all. A thoroughly interesting personal approach that was very well executed.

Excellent book for those looking to get a broad yet personal look at the middle east since the the Arab Spring protests. The writer uses incredibly moving stories to demonstrate larger trends in the region. The book focuses on Egypt, Libya, Syria, and Yemen but also has a chapter on Tunisia. The first four chapters of the book are particularly easy to read.