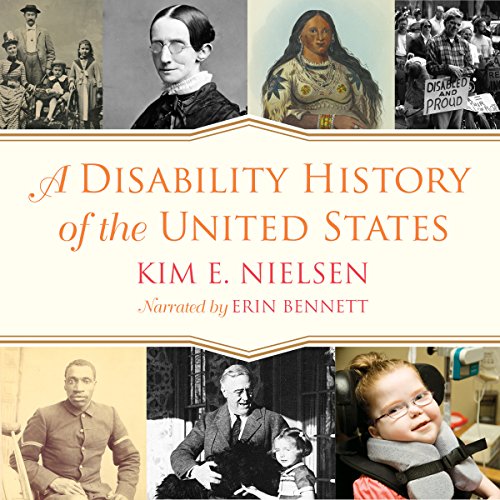 “By displacing the able-bodied, self-subsisting individual citizen as the basic unit (and implied beneficiary) of the American experience, she compels the reader to reconsider how we understand personal dignity, public life, and the common good.” (Inside Higher Ed.)

"A scholarly yet stirring narrative of our nation’s uneasy relations - part pity and empathy, part discrimination and social stigmatization - with disabled people.” (Booklist)

“Nielsen excavates the long-buried history of physical difference in Amer­ica and shows how disability has been a significant factor in the formation of democratic values…The range of this book is marvelous.” (The Wilson Quarterly)

The first book to cover the entirety of disability history, from pre-1492 to the present.

Disability is not just the story of someone we love or the story of whom we may become; rather it is undoubtedly the story of our nation. Covering the entirety of US history from pre-1492 to the present, A Disability History of the United States is the first audiobook to place the experiences of people with disabilities at the center of the American narrative. In many ways, it’s a familiar telling. In other ways, however, it is a radical repositioning of US history. By doing so, the book casts new light on familiar stories, such as slavery and immigration, while breaking ground about the ties between nativism and oralism in the late 19th century and the role of ableism in the development of democracy.

A Disability History of the United States pulls from primary-source documents and social histories to retell American history through the eyes, words, and impressions of the people who lived it. As historian and disability scholar Nielsen argues, to understand disability history isn’t to narrowly focus on a series of individual triumphs but rather to examine mass movements and pivotal daily events through the lens of varied experiences. Throughout the book, Nielsen deftly illustrates how concepts of disability have deeply shaped the American experience - from deciding who was allowed to immigrate to establishing labor laws and justifying slavery and gender discrimination. Included are absorbing - at times horrific - narratives of blinded slaves being thrown overboard and women being involuntarily sterilized, as well as triumphant accounts of disabled miners organizing strikes and disability rights activists picketing Washington.

Engrossing and profound, A Disability History of the United States fundamentally reinterprets how we view our nation’s past: from a stifling master narrative to a shared history that encompasses us all.

A Disability History of the United Statesに寄せられたリスナーの声

However, this texts speaks to the truth about American history and the spirit providing impetus for our civil rights.

It is a fast and inspiring read

This is a beautiful book!

This is a beautiful book! As someone who has a physical disability & involved with disability issues working to make the U.S, and world at large more Accessible I have never ever seen, nor listened to a history of People With Disabilities (PWD) until now. Sure, people with disabilities have always existed since time immemorial starting with the first soldier who ever fought in battle & received wounds. I found the story very personal & well, clearly narrated. This book will shift attitudes, and remind that Disability can happen at any stage of life, and everyone with a disability deserves a Chance to make their mark on the United States alongside their able-bodied peers.

A must read for any intersectional activist.

An excellent summary of the history of disability in the US, with strong ties to racism, sexism, and discrimination against the lower class, veterans, and LGBTQIA+.