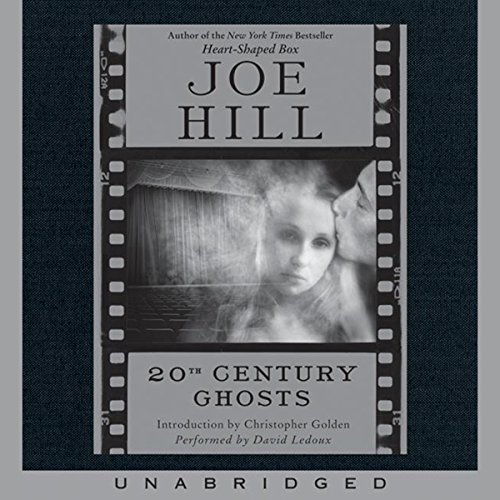 "Most of the stories display the unself-conscious dash that made Hill's novel an intelligent pleasure....Not just for ghost addicts." (Kirkus Reviews)

A dazzlingly original, award-winning collection of visions and nightmares from the New York Times best-selling author of Heart-Shaped Box.

Imogene is young and beautiful. She kisses like a movie star and knows everything about every film ever made. She's also dead and waiting in the Rosebud Theater for Alec Sheldon on an afternoon in 1945....Arthur Roth is a lonely kid with big ideas and a gift for attracting abuse. It isn't easy to make friends when you're the only inflatable boy in town....Francis is unhappy. He was human once, but that was then. Now he's an eight-foot tall locust and everyone in Calliphora will tremble when they hear him sing....John Finney is locked in a basement that's stained with the blood of half a dozen other murdered children. In the cellar with him is an antique telephone, long since disconnected, but which rings at night with calls from the dead.

The past isn't dead. It isn't even past.

I am not a fan of short stories in general and I had never heard of Joe Hill. I don't even know what possessed me to buy this particular book but I think it must have been good luck that I did.

The beauty of the language he uses to describe everything from an inflatable boy to a boy who turns into a giant bug is beautiful. Almost like listening to poetry. Some of the stories are just plain weird and others are downright poignant. The little novella that ends the collection, voluntary commital, is probably one of the best short stories I have ever heard. I find myself giving this book repeat listenings.

If you dislike the twilight zone I doubt you would enjoy this.

I like Joe Hill and have read/enjoyed (hard copy) Hear-Shaped Box.

This collection of stories was a little difficult for me to warm up to. I only really liked Black Telephone. The rest felt..... unfinished. Maybe its just a writting style Im not used to.

I have to say I liked the reader. He sounded a little like he had a head cold but that "stuffiness" made all the "kid" parts see so real.

If you're a fan of spooky stories and prefer them in small blocks, you'll appreciate this book. I have a few personal favorites within this grouping and I'm sure you'll pick out your own. I've already listed to some of the stories twice, just out of "what?! ...did I really hear what I thought I heard?"

My sister also bought the book and absolutely loved it. We were comparing notes after each story... Her favorite story in this book was "the black phone". Mine leans towards "the cape" but I really enjoyed them all. After I finished this book I downloaded "The heart shaped box" and look forward to reading it.

PLEASE!! Stop whispering on audio book narrations. I listen to these books while driving, there is road noise and outside noise all the time, when you listen to narrators like Gene Engene, Frank Muller, Jim Dale, Dick Hill and many others, they don't ever whisper, ever. When the author writes 'he/she whispered', it is wholly unwarranted to whisper the line, if you cant relay the idea of dramatic without whispering, perhaps you should seek out a living in movies or tv, the makers of "The Matrix" absolutely love people to breathe the lines instead of speak, followed by 120db gun fire.

Please leave the inflections of volume to the author who wrote the text, I understand this is largely on the mixing engineer and directors/producers to take care of this in post perhaps, so lets get on the ball.

This book, what I heard of it was another wonderful installment from Joe Hill. It's always fascinating to hear Joe Hill's unique style and his fathers influence seeping through in so many under tones.

All of these stories are ghost stories, you just have to change how you think about ghosts, not all 'ghosts' are spectral apparitions, some are inside us always.

A great book very worth the time, if this is your first Joe Hill book, be sure to also catch Nosferatu and Heart shaped box here on Audible.

Why did I wait so long to hear this?

Yes, I knew he's Steven King's kid. Yes, I listened to Heart-Shaped Box ages ago. Yes, I knew this book existed, but still it took me too long to get around to queuing this up and enjoying these well crafted tales of the bizarre and quietly disturbing tales (well, all except the award winning, but lengthy, Better Than Home, whose subject matter just didn't flow with the rest of the collection).

Hill's stories range from fairly straight-up horror to fun-house mirror fantasy. Vampire hunters and child killers make appearances, as do inflatable boys and painfully realistic underachieving boys with possible super powers. Not to mention the sweet movie house ghost of the title ... What was I waiting for?

joe hill is an exciting new author. i read "heart shaped box" to my husband while traveling, and although the graphic images were tough to read and stomach sometimes, we really loved the story and liked the 20th century touches.

i was eager to try his short stories, and was not disappointed. pop art was an astounding story. the opening story (button boy) was riveting, and the closing story (box forts by morris) was awesome! some stories ended far too early, like the one about the mom and two boys and the geeky teenager who ran across them on the road. i guess mr hill was leaving the outcome of these up to the reader's imagination, but for a first story compilation from a new writer, these stories really read like they were written from a pen with the years of experience like his father!

i did get tired of really sad, life-beaten boys and girls.

by the way, i thought the reader did well voicing teenagers, especially boys, and younger children.

Story after story after story. This is a collection of creepy, funny, horrific, darling gems. All of which come at you, one after the other, from various angles. Sometimes right up front, sometimes sideways, the best of them sneak up behind you and gently tap you on the shoulder.

The title story, 20th Century Ghost, is a fine tale that pays a sweet tribute to the era of the silver screen.

In the Rundown had me dreading the ending - so much so I almost skipped ahead to the next story. Glad I didn't. It has the perfect ending. (If you appreciate films like Inception and Limbo, you'll love the way it ends too.)

Bobby Conroy Comes Back From the Dead gave me a new reason to love George Romero.

My Father's Mask is my favorite story from this collection. I really hope that Joe Hill finds his way back to Jack.

Only cause of complaint.... Audible why can't you code this audiobook work its titles!?!?! I shouldn't have to go to Wikipedia to find out the name of the story I've listened to - it should be on my screen.

The narrator needs to blow his nose. Gross.

Pretty good stories. Spooky and original! The narrator sounds so stuffed up the entire book. I tried to let it go but it's distracting and grosses me out... His n's sounds like d's and the m's sounds like b's. As in "look at the full bood in the sky".

I really liked it!

If you could sum up 20th Century Ghosts in three words, what would they be?

What was one of the most memorable moments of 20th Century Ghosts?

The button boy story was absolutely phenomenal. A great story in an excellent story. I really enjoyed the whole book, some stories more than others but that one was my absolute favorite.

The narrator sounded like he had a cold or something. He had a bit of a whiny voice in some parts.

I would highly recommend this book. I liked the way that each story was so very different than the one before it. It was a truly good read.

Joe Hill is definitely not Stephen King, but he is his son, and he's got a ton of potential. All of the stories were at least engaging, some very much so. I liked the variety.

The reader did a solid job. Not my favorite by a long shot but his voice went well with the characters as most of them were juveniles. I think he will also improve.

The production on the other hand was weird... the pauses between chapters or breaks I'm the story were sometimes filled with ambient noise or music to lead you in, but the breaks between books were poorly demarcated and we're often so quick you barely were able to process that you were starting a new book, and this is partly Joe Hill's fault because he often ends his stories abruptly and allows the reader to fill in the rest which some people I'm sure will take issue with. Overall it was good and I'll be giving him more chances.