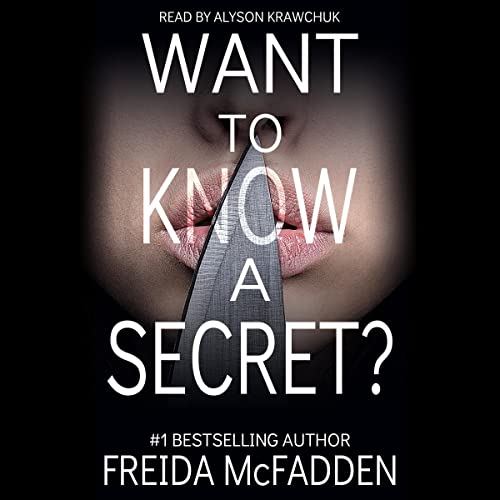 Want to Know a Secret?

YouTube baking sensation April Masterson knows the secret to the perfect gooey brownies. Or how to make key lime squares that will melt in your mouth. But if you keep watching her offline, you may find out some other secrets about April; secrets she’d rather you didn’t know - like where did her son go when he snuck out of the house? What was she doing with the local soccer coach behind fogged windows? And what’s buried in her backyard?

Everyone has secrets. Some are worse than others. April’s secrets are enough to destroy her. I’ll make sure of that.

Want to Know a Secret?に寄せられたリスナーの声

The main Character is so clueless!

The actual story could have been so much better if the main character wasn't so ridiculously ditzy! It was very irritating, especially toward the end. I cannot count how many times I rolled my eyes and yelled at her!

Great story! Kept my interest the whole way through. Told in a truly unique way. This is not about social media, even though I kind of thought it would be based on the description. Great mystery, very refreshing change of storytelling!

This is the perfect physiological thriller. I had no idea what the outcome was going to be. Narrator was perfect!

I love her books and twist was shocking! I did NOT see that coming at the end.

the narrator was great. the ending blew me away. never saw that coming at all

When you read people talk about books and the saying “I never saw that coming” clearly meant they read/listened to books like this. The twists and the turns of this story just blew me out of the water! Another listen that I thoroughly enjoyed.

Nobody in this world this clueless. This would have been an okay book if the main character handled anything realistically. It was so ridiculous I rolled my eyes a million times. I have 2 hrs left and don't think I will finish.

Loved it. Narrator was amazing

Absolutely loved it. The first half was better than the last half though. Mainly because the second half has a character I didn't like as much but it's not really bad. I just didn't love her as much.

Not a single tolerable character...they all are the worst.

This was my second try on this author. I read rave reviews, yet I’m not excited about the content. The characters are so vapid, stupid, selfish...I found myself rooting for them all to die. Terrible, I know, but I can’t recommend. It was almost a DNF, but I powered through. Narrator was pretty good based with what she had to work with. I didn’t enjoy it.

Loved the way this was written Everything was great except the ending which seemed implausible and unnecessary.

Slow start but plenty of reveals and twists

I had the audiobook version narrated by Alyson Krawchuk who does a good job with distinct voices for each of the main characters.

April Masterton is a you tube baking sensation. While recording for her baking chanel she left her 7yr old son Bobby playing in the yard, she only goes to look for him when she gets a text to say your son isn’t where you think he is. The texts keep coming which divulge secrets April doesn’t want revealing.

The first half is from April’s POV. Then the POV and perspective changes. It starts slowly, and feels like a character study then things step up a gear. The second half is eye opening.

April really isn’t a likeable character, but then non of them are. They come across as self serving rich suburban mothers, but they are very focused on what they want.

The foundation laying of this one was a little bit drawn out for me, which has affected my rating. I’m not sure how I feel about the ending.
It has plenty of revelations twists and turns and is an easy enjoyable listen.