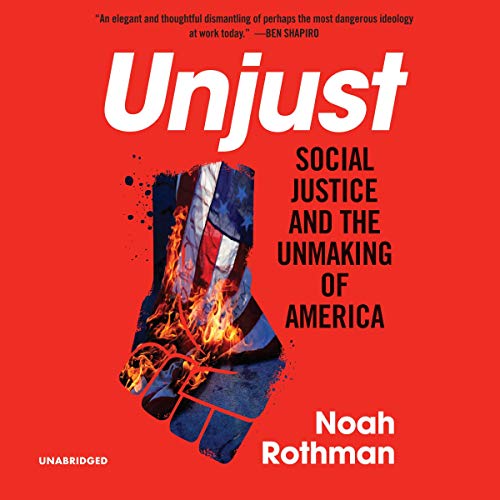 Social justice is not justice - it is a dogma that divides society into identity groups and foments division, anger, and desire for vengeance.

Unfortunately, social justice has permeated America, and as it turns out, it is not a philosophy that appeals to the better angels of our nature. In practice, social justice is outright disdainful of the kind of blind, objective justice toward which Western civilization has striven since there was such a thing as Western civilization. Its advocates would argue that blind justice is not justice at all and that objectivity is a utopian objective, a myth clung to by naive children.

The social justice creed is shaping our every daily interaction. It influences how businesses structure themselves. It is altering how employers and employees interrelate. It has utterly transformed academia. It is remaking our politics with alarming swiftness. And there are consequences for those who transgress against the tenets of social justice and the self-appointed inquisitors who enforce its maxims.

In Unjust, Commentary, magazine associate editor Noah Rothman deconstructs today's out-of-control social justice movement and the lasting damage it has had on American politics, culture, and education and our nation's future.

A brilliant and analytical book

This book was published way ahead of its time and it’s even more profound for what the country is suffering through today. The only fault I find with it is that so few people will read or listen to it. My highest compliments to the author and to the reader a brilliant match. Thank you please know that I have listen to it twice And it will remain a permanent addition to my audio library.

Listen to the book and you can see the bias of the writer. I’m sure he tried to be unbiased but the heart never lies.

Half devils advocate and half denial of true racial inequality - it’s naive at best - and blinded by white privilege at worst. Complete waste of time.

The performer sounded sarcastic and snarky which often reduced, though sometimes matched, the context. The author attempts to evoke a centrist view of the social justice movement, but instead, often times the comes off as a focused, conservative leaning critic of liberal politics while briefly touching on blemishes from the right to attempt some sort of vision of fairness in his proposals. The disparaging and leading adjectives seem to be the greatest indicator of these moments.

The book shines the most when the author flexes his historical acumen. This is especially true in the concluding chapters. I found the description of a protracted history of social justice from a conservative leaning perspective to be the. ostentatious refreshing material that we currently have dealing with h this subject matter.

For the curious reader you will find yourself looking to the authors sources since this explanation of social justice is mostly absent in the current we commonly find in the diatribe of it's purveyors, not to disinclude the many other common and seemingly intractable ideas of cultural appropriateness.

Revisionist in Spirit, Disingenuous at Best

I am seldomed moved to review, and if I am, it is to praise. It is painful to know know the author has this worldview. Yes, there are worse, but this person is paid for his perspective. Is there a way to delete or black out the tittle? The experience has caused much consternation.

I wish I could get a refund. I am forced to settle for a shower.

Interesting read when Noah Rothman stayed on message. Forty percent of the book is a sad lashing out from a RINO. I like to judge a person on their actions not on their words. Trump does say hurtful things but he wins the argument and brings more people to the party unlike Mitten's and McCain. The other sixty percent was entertaining.

This book is largely the work of opinion. The two facts that I checked for New York human rights and pronoun usage, and Columbia segregation could not be verified. One was simply inaccurate knee jerk that did not match the posted code and the other I could not find.

If you're going to approach this subject, be accurate.

This has good stuff. He’s obviously a neocon and anti-Trumper. Ignore most about conservatives running up to and after the 2016 election and there are nuggets.

Overall, this is an outstanding listen, and was very well produced

There’s a tremendous amount I could write in this review, but overall I think “less is more “is the better way to go.


First off, I think Mr. Abell does a great job reading this book. Everything is annunciated very clearly, and I enjoyed his tempo and style of reading.

Regarding the tome itself, there’s a great deal of food for thought here. I think Mr. Rossman almost goes out of his way to ‘try’ to present a balanced view of “Unjust” from both the left and right ends of the political spectrum.

I say “try“, because it’s my opinion (which I think is strongly supported by existing evidence) that there’s far more unjust social justice from one side of the political spectrum then on the other. I won’t say which side that is, because I respect Mr. Rothman’s attempt To convey that balanced perspective.

I found the most intriguing, and perhaps frightening, portions of the book to be the ones related to the hoax hate crimes, and the ever dwindling amount of time spent in Americas classrooms on traditional social studies. For the most part, I think one necessarily leads to the other. If you don’t accurately teach traditional social studies, then you’re far more inclined to do what you think is necessary to tear down the traditional fabric of our country in order to address ill perceived (because not properly educated) “injustices”.

What’s really ironic coming from some of the ”reviewers” who have not actually read the book, is that Mr. Rothman clearly does not like President Trump. With the irony of course being that these pseudo-reviewers are attacking Mr. Rothman in a lot of instances because they view him as some sort of political/conservative radical. That couldn’t be further from the truth.

In fact, I would argue that Mr. Rothman was fundamentally incorrect about the Presidents proposed ban on immigration From certain countries which sponsor/generate most adherents of terrorism. And I would suggest that that misconstruing of the Presidents position was perhaps unconsciously biased by Mr. Rothman precisely because Mr. Rothman does not like him.

But the bottom line is that this was an excellent read. I very much enjoyed most of the material, and learned a lot from it. Some of it I didn’t actually want to agree with, but Mr. Rothman does a very persuasive job of presenting the material

Contains some false information. Otherwise it is pretty good. That is all I have for now.

A good case against a growing problem

This is a good exploration of the rise of identitarian extremism in the United States. It's short on prescriptions, but in order to solve a problem, you first have to recognize that it exists. That seems to be the goal of this book. In short, logic and reason matter less and less today. They are being replaced by an assessment of how oppressed someone's identity is considered to be. Equality of opportunity and taking care of the root causes of problems are being thrown out in favor of an insistence on equality of outcome, even if the inputs are not the same (whatever the cause of that is). This leads to injustice: reversing oppression instead of getting rid of it. The book also has some problems. Right-wing and left-wing identitarianism are discussed in one breath, as though they're remotely equivalent, when only one brand dominates corporations and institutions. The author occasionally goes into irrelevant digressions about how much he dislikes the current President of the United States. The most striking of these was when he bemoaned that politicians and elites do not condemn right-wing violence and left-wing violence equally, when he earlier bemoaned Trump doing that exact same thing. Still, unlike for many public figures, his dislike for Trump does not make him more sympathetic to identitarian extremism.