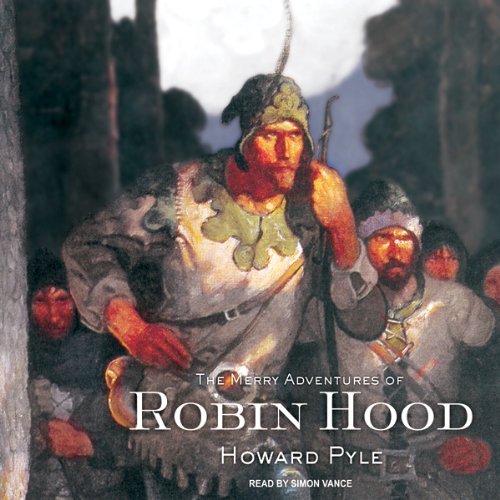 The Merry Adventures of Robin Hood

In Merry England, in the time of old when good King Henry the Second ruled the land, there lived within the green glades of Sherwood Forest near Nottingham Town a famous outlaw whose name was Robin Hood. No archer ever lived that could speed a gray goose shaft with such skill and cunning as his, nor were there ever such yeomen as the sevenscore merry men that roamed with him through the greenwood shades.

He stole from the rich and gave to the poor, and in so doing became an undying symbol of virtue. But most important, Robin Hood and his band of merry men offer young audiences more than enough adventure and thrills to keep them listening intently. Filled with action, villains, and surprises, who could resist the arrows flying, danger lurking, and medieval intrigue?

Howard Pyle's Merry Adventures of Robin Hood was a favorite of mine from a young age. The roaring, rollicking Merrie Olde England was amazing, but as an adult, I appreciate some of the commentary thrown in about the social order drawn in crayon strokes -- it IS a children's book, after all!

It is meant to be a series of tales about Robin Hood, but Pyle did something unique (for the time) and strung together the stories so that while each one is self-contained and enjoyable, is still retains a narrative and a plot. Even though the text is over 100 years old, it has a very fresh feel to it.

The narration was amazing, though I don't know why I bother to mention it. Simon Vance IS one of the best in the business, and I've never been disappointed by a performance of his.

The style of this book can be summed up in one word: daydream. The men are all stout and hearty, the women fair and bright, and the days peaceful, sunny and full of song and ale. Although somewhat repetitive and incredibly unrealistic (steel wasn't invented until centuries after this period and where did all the Merry Men sleep?), it is an enjoyable and worthwhile listen. Simon Vance does a masterful job narrating, as usual.

I really enjoyed this audio book, and the narrator did an amazing job! All the different voices were great!

A hearty boys’ own story

Like most children in the 1960’s my home had a single black and white television and the viewing choices were made almost entirely by my father. I therefore saw many cowboy and war films and, of course, Robin Hood. I played lots of make-believe games about this story until someone pointed out that a girl could never be a merry man. However, I’ve always had a soft spot for the story based around the idea of being with a group of very good friends who feasted, played and worked together. Howard Pyle’s book does justice to the spirit of Robin Hood and I enjoyed the charmingly archaic language and characterisation. The descriptions of the forest are also very good.

I did enjoy this book, but I admit I lost interest at times. Would put it aside and come back to it, refreshed and interested again.