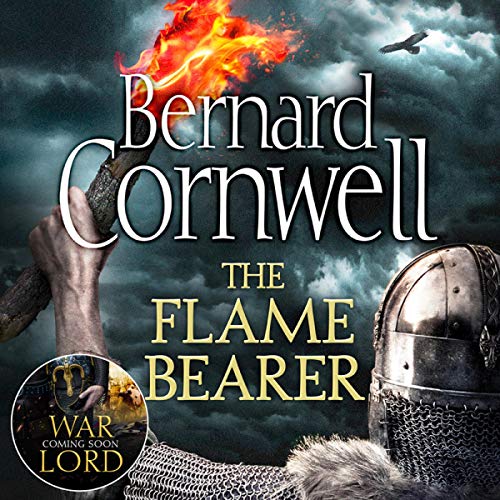 Praise for Bernard Cornwell:
"Like Game of Thrones, but real." ( Observer)
"Blood, divided loyalties and thundering battles." ( The Times)
"Strong narrative, vigourous action and striking characterisation, Cornwell remains king of the territory he has staked out as his own." ( Sunday Times)
"A violent, absorbing historical saga, deeply researched and thoroughly imagined." ( Washington Post)
"The best battle scenes of any writer I've ever read, past or present. Cornwell really makes history come alive." (George R. R. Martin)
"Cornwell draws a fascinating picture of England as it might have been before anything like England existed." ( The Times)
"He's called a master storyteller. Really he's cleverer than that." ( Telegraph)
"A reminder of just how good a writer he is." ( Sunday Times)
"Nobody in the world does this better than Cornwell." (Lee Child)

The brand-new novel in Bernard Cornwell's number one best-selling series on the making of England and the fate of his great hero, Uhtred of Bebbanburg. BBC2's major TV show The Last Kingdom is based on the first two novels in the series.

From the day it was stolen from me, I had dreamed of recapturing Bebbanburg. The great fort was built on a rock that was almost an island; it was massive, it could be approached only on land by a single narrow track - and it was mine.

Britain is in a state of uneasy peace. Northumbria's Viking ruler, Sigtryggr, and Mercia's Saxon Queen, Aethelflaed, have agreed to a truce. And so England's greatest warrior, Uhtred of Bebbanburg, at last has the chance to take back the home of his traitorous uncle, which was stolen from him so many years ago - and which his scheming cousin still occupies.

But fate is inexorable, and the enemies Uhtred has made and the oaths he has sworn combine to distract him from his dream of recapturing Bebbanburg. New enemies enter into the fight for England's kingdoms: the redoubtable Constantin of Scotland seizes an opportunity for conquest and leads his armies south.

Britain's precarious peace threatens to turn into a war of annihilation. But Uhtred is determined that nothing, neither the new enemies nor the old foes who combine against him, will keep him from his birthright. He is the Lord of Bebbanburg, but he will need all the skills he has learned in a lifetime of war to make his dream come true.

A compelling story, wonderfully performed by Matt Bates. I need more of these stories from Bernard Cornwell!

A fine ending to a long tale.

Well narrated and a fine story to finish Utred's journey. Although who knows if it's the end ;-)

I've read a lot of books, I believe more than 400 in fact. This was one of the best!

Well done sir, and thank you

Probably one the best in the series

Uthreds last stand is action packed and ties up the series well. Although the end could use a little more dialogue especially between old friends like Uthreds and Finnan but, overall you've got to love the way we not only finally answer the question: "will Uthred ever retake bebbanburgh?" but, also, get to reminisce with the character on his achievements to date.
Ultimately, the biggest disappointment in the book is that I've now finished a series that I've been following for years through the paperback and audio books. I can only hope that the next few years of the tv show are just as gripping (even though I know the story and uthreds nicer than he is here)

Where does The Flame Bearer rank among all the audiobooks you’ve listened to so far?

I adore the Uhtred series. I could be a Shield Maiden! I do more housework/gardening when listening to this series, than at any other time. Almost do anything to plug in and escape.

There is a cynical humour and an earthiness but at the same time, I feel that there is a lot of well-researched knowledge in the stories. There is a flow that picks me up and sweeps me along, almost breathless.

Which character – as performed by Matt Bates – was your favourite?

Matt Bates is Uhtred! as soon as I hear his voice, he transports me to Anglo-Saxon England.

Please tell me that this isn't the last in the series!!!

An excellent storyline and wonderfully read. I'd been looking forward to this and wasn't disappointed!

Is this the end?

Loved it but does the saga finish here? I do hope not! It is brilliantly read with some great accents.

A great story, but poorly read

Personally I am solely continuing as Cornwall's writing is so enjoyable, however I truly miss the fantastic delivery that was performed by Johnathon Keeble; an orator that truly captured the essence of each character, and was able to provide them with a unique voice as well as their own accent. Truly Matt Bates is my only complaint.

I have only reviewed the last book as I couldn't be bothered to do all 10. I would definitely recommend this series. Bernard Cornwell has a way of making everything so believable. His historical detail has a lot to do with it.
If you liked the Warlord chronicles you will like this. And if you havn't read the warlord chronicles then do so, it's better than this series.

It's a shame the original narrator didn't do all 10 book's. It does spoil it a bit when it's a talking book and the voice's keep changing.

this was a brilliant book just like all the rest of the series good books.

I have read all of the books leading to this one but was unable to find time . so over the holidays I got a glass full , sat down refused to do anything else until I had listened to the conclusion , a true work of art thanks Bernard ! well read and delivered by audio. best day for a while ... thanks.

This is not up to his usual standard.The story had a predictable ending and much time was spent endlessly repeating the perceived outcomes and political motives of the various characters.He is usually much better than this.

Yet another short story from Bernard

I have been following this series from the very beginning and they have been fantastic but the last two books are just scratching at the barrel of ale. Where's the story ? I miss the adventures and the side stories ? I miss the cannot wait feeling for the book to come out and sit and listen for 13 epic hours of intrigue, relationships and war... now it's fulling his return to his castle. All this time waiting for an amazing war, an amazing battle, an amazing build up to ... there you go here's your castle. Very very disappointed. This book should of been so much more... when I think of The lords of the North, Death of Kings or even the battle scenes in The Pagan Lord.....this latest instalment falls flat on its face. Come on Bernard you can do so much more

this is a great chapter to the Saxons story

everybody will enjoy this chapter of this series is full of excitement twists and Utred humor.

Is This The End?

Great narration, one of the best. Bernard Cornwell is the king of historical fiction, I love all his books and this is no exception. Is this the final of this series? My one gripe, if it is then I found it a little anti-climatic, after what has been essentially a ten book lead in. But that is a small quibble, I really liked the story, and the secondary characters, which seem to have enlarged in scope as the main protagonist gets older, it's a realistic portrayal.

Great story, fantastic series of books that has been totally ruined by the change in Narrator after the first 4 or so books. This muppet can’t even say the names correctly in line with first books and tv series. What were the publishers thinking

The reader just makes this story come alive. The whole series is worth listening too.

Could be the best in the series yet. Utred the wicked in fine form in this epic.

Matt Bates does credit to an amazing series

I hope I got the name right

I read this series in paperback something like 6 years ago and have Revisited it in audiobook form and thoroughly enjoyed the newer additions. the first two narrators were good but a little bland but in the last two or three books the story has really come to life. every people has a unique accent, every character has a unique voice and the inflection and tone used is masterful. I could not stop listening and I could not recommend for series more highly.

I'll be visiting this amazing history filled castle on the coast one day and that's because I feel a closeness to it, that's who good this book and the series is.

At last the legend ends

Would you consider the audio edition of The Flame Bearer to be better than the print version?

I did not know the book was out (which I will buy) so Ive listened first a bit arsey versey but anyhow it was great. I even had earphones in, in class and i'm a lecturer!

What does Matt Bates bring to the story that you wouldn’t experience if you had only read the book?

The ability to do other things whilst listening.
Plus Matt's accents make it seem more real.

Possibly when the bad guy's were sneaking in the back way but if you mean like a child getting cancer "moved" me it's not that kind of book.