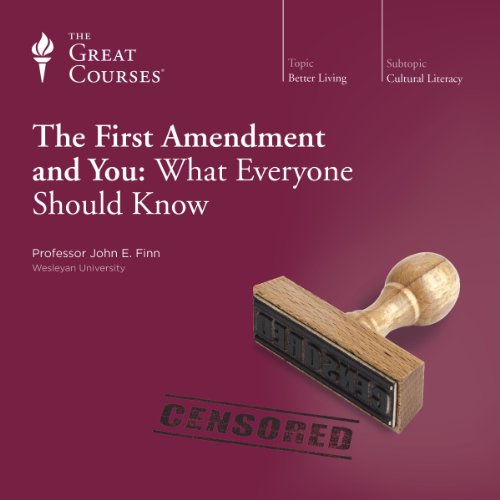 The First Amendment and You: What Everyone Should Know

A mere 45 words, the First Amendment to the Constitution stands as a pillar of our democracy and has had an incalculable influence on the development of human freedom in the United States and the Western world. To study the First Amendment is to learn something about the meaning of America and who "We the People" are - and to see the significant and far-reaching cultural implications of this fundamental constitutional provisions.These twelve practical lectures offer a guide to understanding the protections and limitations implied by the First Amendment.

You'll learn what and whom it protects, and why it matters to you personally. You'll consider questions of how we define speech, the meaning of "religion," and when the state can interfere with your rights.

You'll also explore the questions courts and citizens will be grappling with for years to come: How does the First Amendment apply to the Internet? Does the First Amendment apply to video games? Should new communication technologies make courts reconsider well-settled rules? Is social media subject to existing principles, to new ones, or to none at all?

Throughout these lectures, Professor Finn returns to a fundamental theme: What the First Amendment protects is largely a function of why it protects it-the why being America's commitment to democracy and liberty. In pursuit of these ideals, courts have often placed a higher value on political speech, although no such distinction is made in the Constitution. You'll examine numerous landmark Supreme Court decisions, including Citizens United v. Federal Election Commission.

I am a political junkie and the US Constitution is particularly interesting and important to me. I feel very strongly that the Bill of Rights is an important part of what defines the US democracy so I was thrilled to see a series of lectures about the first amendment.

Professor Finn clearly knows his material very well and has a good sense of humor.

With that said, he tries to cover too much material in the amount of time allotted for each lecture. As a result, he ends up raising an important question or issue, citing the case and the decision and reading (some times at length) from the court's decision & the Justice's opinions.

What he does not do, but would have made this a five star listen, is to take some time to "decode" the extremely thick, legal comments made by the judges into "plain English." I would have liked to hear him say something like, "so, what Justice so and so is stating is that Free Speech can be restrict if and when."

I found myself rewinding a lot because the material is so densely packed. Worth checking out if you like to listen hard and pay attention to your books (or lectures). Do not buy it if you want to space out and absorb.

Not What Most People Think

Simplify it by presenting a clear outline then, point by point, explaining the particular point and giving one or two simple examples. While not a simple topic, Prof. Finn presents it as though addressing a Law School audience. Audible needs (and has) a wider audience who should hear this material.

Glad it was over.

Have you listened to any of Professor John E. Finn’s other performances before? How does this one compare?

Could you see The First Amendment and You: What Everyone Should Know being made into a movie or a TV series? Who should the stars be?