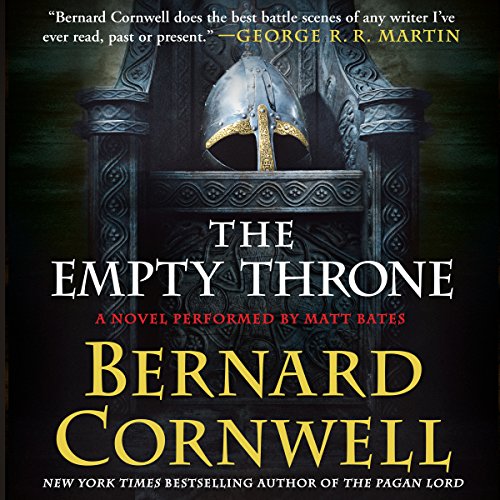 Britain, early 10th century AD: a time of change. There are new raids by the Vikings from Ireland, and turmoil among the Saxons over the leadership of Mercia. A younger generation is taking over. Æthelred, the ruler of Mercia, is dying, leaving no legitimate heir. The West Saxons want their king, but Uhtred has long supported Athelflaed, sister to King Edward of Wessex and widow of Aethelred. Widely loved and respected, Athelflaed has all the makings of a leader - but can Saxon warriors ever accept a woman as their ruler? The stage is set for rivals to fight for the empty throne. In the end it is one champion, one hero, who will destroy the new Viking threat to Mercia - and ultimately decide the fate of England.

With this eighth entry in the epic Saxon Tales series, we are reminded once again why New York Times best-selling author Bernard Cornwell is "the most prolific and successful historical novelist in the world today" (Wall Street Journal).

The old man still had it

SPOILERS - At first I thought that the entire story would be from the perspective of Uhtrech the younger, which I thought would have been cool. But I wasn't at all disappointed that after the first chapter the rest of the story was from the perspective of the older. Even being an old man, 55-ish by my guess, He can still holds his own and the story doesn't sin in the slightest.

I'm warming up to Matt Bates, who isn't horrible as a narrator. He's just not as good as Jonathan Keeble was.

Uhtred of Bebbanburg continues his epic life as he introduces coming generations to wisdom and power. Wounded, unable to fight in shield walls, he leads, guides and connives in continuing service to his higher vision. Action packed narrative introduces a new cast of characters in ongoing conflicts internal and external to proto-Engeland. Again this year I can't wait for the sequel.

I love these kind of stories and I have found a new Master it them! I am well pleased, and want more!

There were failures (in my opinion) with the early audible versions of this terrific series. I read them in print. But The Empty Throne, read by Matt Bates, is extraordinary (as was the last book, "The Pagan Lord"). I love this series and expect a story that is wonderful from Cornwell. I'm never disappointed. This tale, so beautifully enhanced with the narration, left me in awe of Matt's amazing talents. When the book ended, I started it from the beginning, to enjoy it again. The writing and the narration are absolutely wonderful. I miss Uhtred already.

Great evolution to the series. I never get tired of Cornwell's series. Hoping for another 2 or 3 long books!

Jonathan Keeble IS the voice of Uther!

I love the series. excellent writing. The narrator takes on the personal of the audio book.

Changing narrator in a series loses cohesion and listeners stop listening & stop buying.
Once a narrator does the FIRST book of ANY series, that narrator HAS to finish the whole series. Otherwise, the cohesion and speaking styles are being constantly in your thoughts and how un-injoyable different narration detracts from the audio production of books.
Basically FYI, STAY WITH ONE READER FOR A WHOLE SERIES!!! Thank you.

Great book. I would have given it an overall five stars if they included the historical notations at the end.

Awesome book! One of his best books.

Awesome book! One of his best books. Story and performance were very good. Don't miss it.

I am a big fan of Bernard Cornwell's stories. I got hooked on Richard Sharpe and from there have read many of his other series including this exciting series of old England. This is book eight in the Saxon series of historical fiction that chronicles the making of England and is set in the eighth century England. The protagonist of the story is Uhtred of Bebbanburg. England is now fractured, torn apart by internal fighting since the death of King Alfred and the threat of a Viking invasion.

The ruler of Mercia is dying, leaving no legitimate heir. His wife, Ethelflaed is the daughter of King Alfred and is a formidable fighter and leader, but no woman has ever ruled over an English Kingdom. With Uhtred’s help Ethelflaed attempts to gain control of the throne of Mercia. The fight for the Mercia throne leaves an opportunity for the rival West Saxons to siege Mercia. Edward of Wessex is distracted by the two heirs claiming his throne. Will the Viking’s take advantage and invade?

Uhtred is older and recovering from a near fatal injury ( see book 7 The Pagan Lord) facing more turbulent times and intrigue that sees him doing what he does best-leading a war band.

Cornwell creates a sense of the historical place and time that comes through well, clearly the book is well-researched. The main characters continue to be well developed. Cornwell is truly the master of the battle scene. Cornwell leaves me waiting breathlessly for the next book in the series. Matt Bates narrates the book.

This is hands down my favorite book series and this installment doesn't disappoint. many believe that this series should have ended two books ago. But I would read a hundred more.