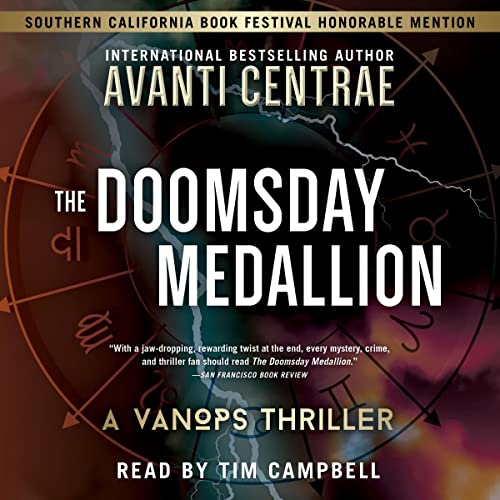 The next standalone installment of the six-time award-winning and number one international best-selling VanOps thriller series is a heart-stopping story of spies, lies, and family ties.

"With a jaw-dropping, rewarding twist at the end, every mystery, crime, and thriller fan should read Doomsday Medallion." (San Francisco Book Review)

Aikido black belt Maddy Marshall is celebrating the completion of her black ops training when news of a military takeover in the South China Sea shocks the world because it was predicted by a 16-year-old French student. When intel chatter spells danger to Avril, the young seer, VanOps Director Bowman assigns Marshall and her twin brother, Will Argones, to protect the girl.

Emotions between the siblings are running hot due to their aunt’s recent stroke, which has reminded them of the childhood accident that scarred both his chin and her heart. Tensions ratchet higher when they arrive at Avril’s home to find the instant social media star has been kidnapped, leaving them with only clenched fists and cryptic clues that lead to a formula encoded on an etched-bronze medallion.

While Taiwan fears an invasion that will set off an apocalyptic chain of events, Marshall and Argones race through medieval French towns, Italian cathedrals, and ancient Greek temples attempting to find Avril before their enemies use the girl to discover the Holy Grail of military intelligence. If the team fails, they won’t need a crystal ball to know millions of innocent souls will be destined to join Nostradamus in the afterlife.

“Perfect for fans of Steve Berry and James Rollins.” (BestThrillers)