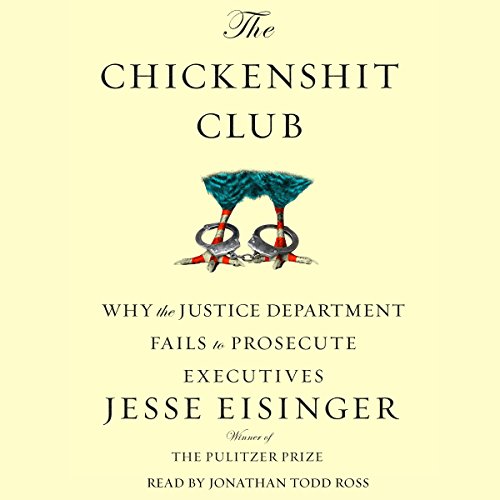 From Pulitzer Prize-winning journalist Jesse Eisinger, a blistering account of corporate greed and impunity and the reckless, often anemic response from the Department of Justice.

Why were no bankers put in prison after the financial crisis of 2008? Why do CEOs seem to commit wrongdoing with impunity? The problem goes beyond banks deemed "too big to fail" to almost every large corporation in America - to pharmaceutical companies and auto manufacturers and beyond.

The Chickenshit Club - an inside reference to prosecutors too scared of failure and too daunted by legal impediments to do their jobs - explains why. A character-driven narrative, the book tells the story from inside the Department of Justice. The complex and richly reported story spans the last decade and a half of prosecutorial fiascos, corporate lobbying, trial losses, and culture shifts that have stripped the government of the will and ability to prosecute top corporate executives.

The book begins in the 1970s, when the government pioneered the notion that top corporate executives, not just seedy crooks, could commit heinous crimes and go to prison. The book travels to trading desks on Wall Street, to corporate boardrooms and the offices of prosecutors and FBI agents. These revealing looks provide context for the evolution of the Justice Department's approach to pursuing corporate criminals through the early 2000s and into the Justice Department of today.

Exposing one of the most important scandals of our time, The Chickenshit Club provides a clear, detailed explanation as to how our Justice Department has come to avoid, bungle, and mismanage the fight to bring these alleged criminals to justice.

Makes Perfect Sense to Me

The book asks one question: why won't anyone in the Department of Justice go after the dirty so-and-sos who destroy companies and harm the public for their personal gain? My background in ethology tells me that as primates, we do not like to challenge authorities. The higher on the food chain, the less prone a person should be to prosecution.

This book looks at how such a power structure gets enforced. It looks at how CEOs and owners have used their positions within corporations to influence and rewrite the laws so that they now protect the corporations and their executives from their victims rather than protecting the people from power grabs and greed. It explores the systematic and brutal treatment of members of task forces who have tried to prosecute the most egregious cases and the appointment of judges who favour the companies.

Thank you, Mr. Eisinger, for putting these pieces together so that even someone like me, who is unskilled in economics and the law, can understand this history of the dismantling of our protections and the transfer of power to an ever-shrinking oligarchy.

meticulously researched, tons of details and thought-provoking. completely unbiased in my view. makes the average Joe understand in Easy explanations what the challenges are.

Be prepared to be pissed off when you read this. The direction the justice system has taken since the Enron failure is simply disgraceful.

I loved his book so much. The narration was incredible, I think Ross did a magnificent job.

The way the book goes through the different investigations that the Justice Department undertook was beautifully structured. I think this book did a great job avoiding overt bias, and instead stuck to telling how and why the system handle prosecutions that way that it did.

If you have any interest in this topic, this is the book to read!

Get ready to become really pissed off

I dare anyone to read this book and come out of it thinking our criminal justice system isn't full of shit. A truly infuriating read.

A complex and sophisticated work of investigatory journalism

This is an outstanding sophisticated work of investigatory journalism that details the complex nature of white-collar prosecution over the the past forty or so years by the US Dept of Justice and the SEC. Beginning with the aggressiveness of the criminal division of especially the Southern District of New York to the slow erosion of such nature into the decade of the 2000s and beyond and whys. While behemoth corporations committed fraudulent acts the DOJ became more passive about bringing corporation and top executives to task for wrongdoing. It is a story for today’s political climate as a prosecutor’s duty to seek justice has been highjacked into settlements with admissions without consequences, civil penalties of no real significance. As a former state prosecutor and criminal defense lawyer, I found this subject intriguing. The writing is detailed and complex regarding financial terms and legal procedure. It takes some background knowledge to be up to speed to understand facts.

If you have a bank account, you need to read this book

Read it and then stop re-electing anyone. We have many to blame including ourselves.

What an explanation for lack of prosecutions!

Where does The Chickenshit Club rank among all the audiobooks you’ve listened to so far?

Fairly high and I certainly will be recommending the book to others. This book should be on anyone's "read soon" list.

What other book might you compare The Chickenshit Club to and why?

The Chickenshit Club might compare to a book about Enron, or the author who tried to alert people to Bernie Madoff's scheme, or the book Chain of Title, or the new book Sellout. All of these books have people who try to do the right thing or unwind an outrageous scheme.

Have you listened to any of Jonathan Todd Ross’s other performances before? How does this one compare?

No, but the narration is quite satisfactory.

This book deals with relatively current events other than background history so the only emotional response might be frustration with the system at the SEC and the DOJ.

Definitely do not overlook this book.

Would you listen to The Chickenshit Club again? Why?

Nothing but an accurate indictment of the US Attorney's revolving door mentality around this country, the use of corproate money as an income asset of the largest imbedded white shoe law firms who have their grimy hands on the levers of power at Justice, and big business' use of corporate money to grease all the wheels so their theiving corporate executives avoid jail for their stealing, fraud, and fleecing of the 401K small guy stock holder who possesses some type of idiot idea that they are playing in a level playing field toward a safe retirement!

No wonder the right and alt right who are funded by big business are only interested in getting their 'conservative' big business friendly judges on the federal trial and appeals courts around the country!

A MUST READ AS A RESULT.

A Tribute to Southern District's struggle!

I just finished this book, it was excellent, a little long and tedious from time to time, but do not recommend it until after the election and on the backside of the pandemic. The reason is simple, we have enough to be pissrd off about without piling this on right now.