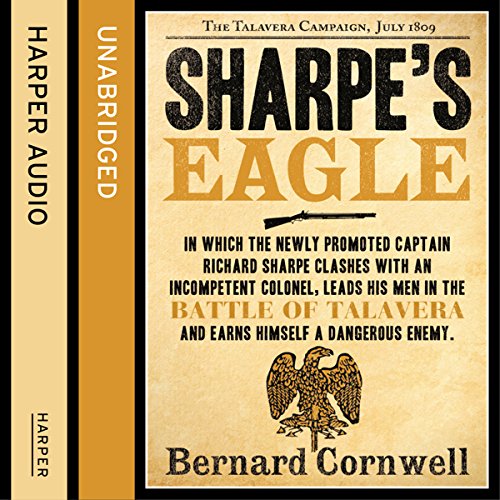 "Sharpe and his creator are national treasures." ( Sunday Telegraph)
"Bernard Cornwell is a literary miracle. Year after year, hail, rain, snow, war and political upheavals fail to prevent him from producing the most entertaining and readable historical novels of his generation." ( Daily Mail)
"Cornwell's narration is quite masterly and supremely well-researched." ( Observer)
"The best battle scenes of any writer I've ever read, past or present. Cornwell really makes history come alive." ( George R.R. Martin)

The newly promoted Captain Richard Sharpe clashes with an incompetent colonel, leads his men in the battle of Talavera and earns himself a dangerous enemy. As Sharpe leads his men in to battle, he knows he must fight for the honour of the regiment and his future career.

Soldier, hero, rogue - Sharpe is the man you always want on your side. Born in poverty, he joined the army to escape jail and climbed the ranks by sheer brutal courage. He knows no other family than the regiment of the 95th Rifles whose green jacket he proudly wears.

Bloody 'ell. Great story. Love this series of books
Sharp does the right thing at the right time

best book of the series

my favourite book of the series. Rupert farley is an excellent narrator capable of bringing a wide spectrum of characters to life.

Fantastic adaptation of a wonderful series of books. I'm a huge Sharpe fan, and I couldn't fault the narration here.

The best Sharpe novel of the original series. Sparkling dialogue and entertaining run ins with those who look down on him. A really engaging story brilliantly narrated as usual.

As Sharpe As Ever

If you've read through the books to get this far then you know what to expect, both from the pen of Cornwell and the voice of Rupert Farley. This is an excellent continuation of the series which while yes it does follow a certain formula provides seriously good entertainment.

Yes there are stupid and mean-spirited senior officers that clash with Sharpe et every opportunity and yes there is a love interest and so on but it is brilliantly done. When you're addicted to something you don't often want something different from your chosen "fix".

This one though is definitely one of the best I've read so far, lots of good action, lots of intrigue and fun dialogue and even the love interest is skillfully woven into the plot so as never to bog it down too much about our hero becoming all dewy eyed . . . again!

Once again it's a bravo to Messrs Cornwell and Farley.

I'll say it again. TV does no justice to these stories. A ripping yarn has to be told in its entirety. A little bending of history but nothing on the scale Hollywood displays on a regularly mangling basis. So, on we go, over the hills and far away.

The brilliance of this story is how the author makes everything seem utterly impossible. Sharpe moves from disaster to catastrophe and back again which makes any hard-won small victory he does manage incredibly satisfying.

A Fantastic book. Well read and wonderfully entertaining as are all of the sharpe books.

As always Rupert Farley performed excellently.
Thanks to the TV production I cant picture anyone else but the characters. But now the voices are firmly Farleys.
Cornwell once again shows his wordsmanship skills

The narrator is the best of any I have come across.
I read the entire series many years ago but Rupert Farley brings life to the characters. Better than the TV series.

The book that started it all.

Easily one of the best historical novels of all time and all periods. Similarly Sharpe and Sgt Harper are prominent amongst the best fictional military characters in any historical setting. Rollicking good adventure stuff.

Its a shame that the 4 or 5 pages of Cornwalls historical notes, as found in the printed version, are not included at the end though.

Sharpe and Harper will march again.

Excellent description of various battles that Sharpe becomes involved ln. A believable plot that shows up the impotence of many english officers who by accident of birth can command men into battle without the requisite capicity to lead.