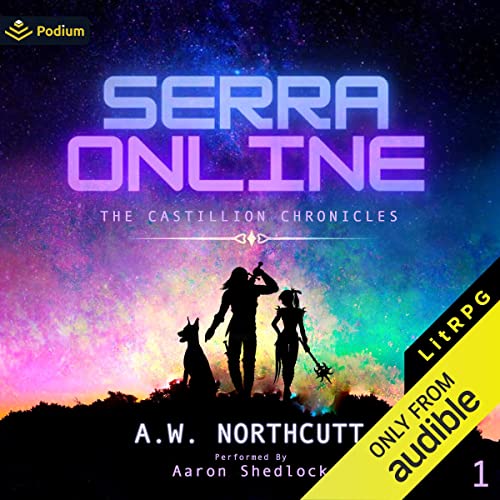 All Ethan wanted to do was take his girlfriend to Pixelcon and watch the release coverage for Serra Online, a virtual role-playing game.

The game sounded better than Ethan could imagine, from new classes to unstoppable magics, but the icing on the cake was a chance to be one of the first to play it. After an easy decision to play a gladiator, he woke up in a new world separated from the one he loves the most.

Stephanie only went to that gaming convention to appease her boyfriend, and somehow ended up stranded in a strange world controlled by magic. Lost and traumatized, she has one goal, to find Ethan. For security? Maybe. For love? Possibly. To skin him alive for dragging her into this god-forsaken place? Most likely.

While both Ethan and Stephanie have the same desire, their paths back to each other could not be further apart. What will a tank do when he is separated from his pocket-cleric? What is a healer to do when she is lost in a cruel and unforgiving world? Get a dog and start a collection of plucked-out eyeballs, of course.

Great Addition to the LitRPG Genre!

From the Setting to the Characters, I loved this book! The world of Serra has been so beautifully described, it makes the reader feel like you are there. Serra Online embodies the essence of an MMORPG and brings it to life in an exciting tale of action and adventure with a splash of comedy. I loved the narrator's differing voices and heard the story in a whole new light in listening to it on Audible. Would highly recommend this to the LitRPG crowd as a "must-read". Can't wait to find out what happens to Ethan in the second book of the Castillion Chronicles!

I loved this adventure from start to finish! Northcutt has created a new world that sucks you in and traps you until the very end. Aaron is a wonderful narrator and brings this story to life as it deserves. Do yourself a favor and get this book!

I enjoyed this book immensely! The story was well-thought and well-written. It kept me engaged and entertained all throughout. I liked how the game system was meticulously and seamlessly integrated into the story.

Aaron Shedlock was just brilliant! His performance seriously made everything better. He's very consistent and precise with all of the characters' voices.

Just in case you thought this was for children, there's a lot of foul language throughout. Kinda simple litrpg but not bad.

Good but Not Great

I enjoyed most of this story however there were parts of it that made no sense. The largest such instance was when our Gladiator MC goes to hunt down the thieving traitor. It struck me as absurd that they would not even think to recover the "All So Powerful" Stolen Goods. Sure silencing the fool is a top priority but they don't even consider that the Bad Guy will still get his hands on the All Powerful Items. This is completely absurd.