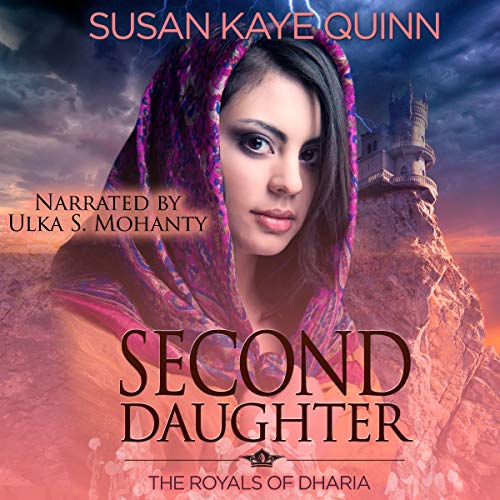 Aniri’s life is supposedly perfect - she’s beloved by the people of Jungali and betrothed to their handsome prince. He’s a noble barbarian who’s pledged to use his skyship for peace, but the threat of a second skyship in the hands of rival country Samir looms over their impending marriage...and Aniri begins to question her rush to marry a man she barely knows.

When the Second Daughter of Dharia is poisoned, Aniri tells her soon-to-be husband she must rush off to Samir to care for her beloved sister. After all, how can she wed when Seledri may be dying? But in her heart, Aniri fears she may be like her long-lost father, fleeing the responsibilities of crown once again.

Aniri may be a runaway bride, but the dangers in Samir are real - Seledri is being stalked by an assassin, the second skyship could bring war, and the three Queendoms have never had so much unrest. As Aniri fights to free her sister from a husband and a country she does not love, she unlocks tightly-kept secrets that might have been better left uncovered...and she wonders whether a love pledged in the heat of adventure can survive the looming threat of war.

Second Daughter is the second book in the Royals of Dharia trilogy. It is told from Aniri’s point of view.

Just as good as the first!

This second book is just as exciting as the first, although the focus has changed! I loved the family complications, and the love and dedication between the two sisters.This book had everything a reader wants, including action, intrigue, mystery and romance. It was beautifully written and exciting with a pace that was easy to be fully engaged in. I loved the characters, both good and bad, small and impactful. If you read the first book then you definitely should pick this one up! *I was given this book in exchange for an honest review.

Another great addition to the Dharia series,

Ulka S. Mohanty did a wonderful job with the narration.!

I really have been enjoying this series!

A GREAT STORY.!!!!!
I ABSOLUTELY LOVE IT. GOOD FOR PEOPLE OF ALL AGES. BE READY FOR THRILL INTRIGUE SUSPENSE AND A NEED TO HEAR THE NEXT ONE. NARRATOR WAS GOOD EASY TO FOLLOW.

My second read from author Susan Kaye Quinn. A rollicking steam-punk adventure set in exotic India. Don't let the title throw you, even though it says Second Daughter the main character is the same as from the first book. Well-written with well-developed main characters, an enjoyable read, even better than the first book in the series. I was given an Audible copy of this book & I'm voluntarily reviewing it! Now to get the third book. (RIP Marley January 20, 2014 - July 24, 2018)

The journey continues with the second daughter. But things are more rocky then before. The relationship between the first son and third daughter Is like that of any other young couple. There is uncertainty and worry, assumed betrayal and of course, with the Royals, there are rumours. Not to mention the growing concerns of war between the three Queendom’s. I love the life that audible provides to the story and the way the author continues to keep you in suspense and often surprising you with different outcomes. I look forward to book 3!!!