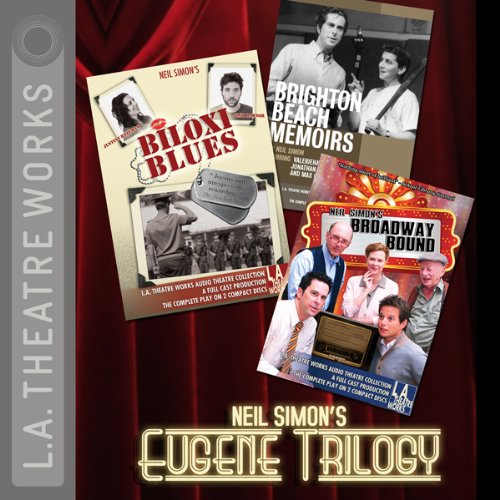 Brighton Beach Memoirs: In the first installment of the trilogy, 14-year-old Eugene is preoccupied by his passion for the Yankees and his lust for his beautiful cousin.

Biloxi Blues: The second hilarious installment of the Eugene Trilogy follows our naïve hero and his sadistic drill sergeant through boot camp in Biloxi, Mississippi.

Broadway Bound: Having returned from World War II, Eugene and his brother Stanley joing forces to break into the world of professional comedy writing.

I enjoyed Brighton Beach Memoirs and Broadway Bound was superb. But Biloxi Blues just didn't get the performance it deserved. It lacked both sufficient humor and also depth. The story is excellent but unrealized in this performance.

The Eugene Trilogy has always been a favorite when I was in my teens & twenties. I decided to pick it up in audio and it didn't fail! It's still wonderful & the performances were just as amazing.