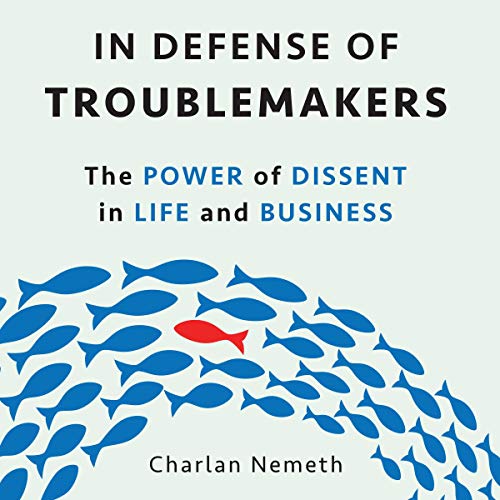 An eminent psychologist explains why dissent should be cherished, not feared

We've decided by consensus that consensus is good. In In Defense of Troublemakers, psychologist Charlan Nemeth argues that this principle is completely wrong: left unchallenged, the majority opinion is often biased, unoriginal, or false. It leads planes and markets to crash, causes juries to convict innocent people, and can quite literally make people think blue is green. In the name of comity, we embrace stupidity. We can make better decisions by embracing dissent. Dissent forces us to question the status quo, consider more information, and engage in creative decision-making.

From Twelve Angry Men to Edward Snowden, lone objectors who make people question their assumptions bring groups far closer to truth - regardless of whether they are right or wrong. Essential listening for anyone who works in groups, In Defense of Troublemakers will radically change the way you think, listen, and make decisions.

Outstanding! a must read for anyone who is breath

This book shines a light into the dark corners of human behavior called consensus or group think. Decent liberates us from the polarity of doing what everyone else is doing so we fit in and feel like we belong.

It's a bit unnecessarily long / repetitive in making its points, but definitely some interesting ideas to keep in mind. Also wish the narration didn't sound like a documentary out of 1995, but maybe that's just me.

This is an argument that need not be made.
While we will all agree with some of her points, we already know this and don't need the negativism she presents. Why make an argument by discrediting everything others have done? She has gone to greater lengths to discredit others than to present us with a valid idea or solution. Reading this is akin to watching Fox News or CNN during the Trump administration... someone angrily screaming about nothing all day, but not proposing solutions.

The Science of Dissent: It sets us free & keeps society safe

Well researched and presented book on group dynamics. Extremely valuable for any change agent in an organization who wants learn about the value of embracing authentic dissent. Provides helpful guidance to scholars researching leadership & group dynamics.