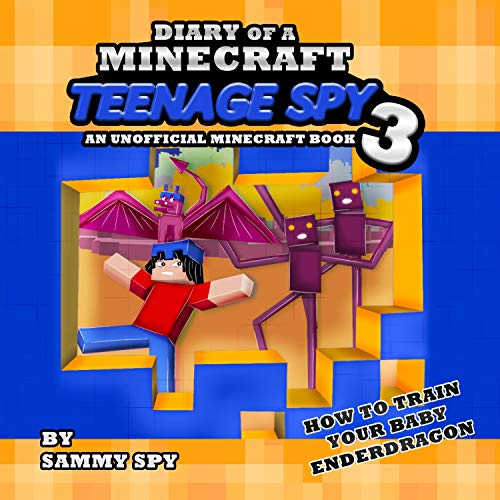 Are you ready for a Minecraft dragon adventure? Sounds like you need the village teenage spy by your side!

In this funny action series, we get to hear the adventures of a Minecraft school spy, Sammy.

Sammy Cooper is 14 years old, and his village isn't like anything you have ever seen before.

You see; he lives in a Minecraft village, where everything is made from blocks and dangerous creatures roam the land. He is just your normal, average teenager until events lead to wars, golems, and jungle tours.

But can he and his friends survive the terror that follows the Endermen wherever they go? Do they stand a chance of protecting the baby Enderdragon they have been entrusted with? Will the dragon be able to fly and defend himself?

Get ready to dive into the crazy world of Minecraft to find out!

If he fails, his village will be destroyed for good.

So what are we waiting for? Let's get stuck in! How to Train Your Baby Enderdragon will have any kid who loves Minecraft, video games, spies, and school adventures be on the edge of their seats. If you have a superhero in training who loves a hilarious, action-packed adventure, then this story's a surefire way to keep any young kid enthralled.

For an adventure that truly understands what it's like to be a kid, buy right now.

Be warned: This book contains burps!

How to Train Your Baby Enderdragonに寄せられたリスナーの声