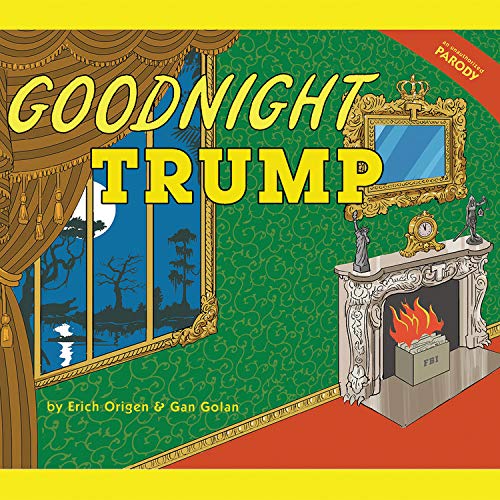 Turn out the lights on another endless day in Trump's America with this parody of Goodnight Moon by the best-selling duo behind Goodnight Bush - putting to bed America's most yugely bad president ever.

In the very classy room

There was a golden mirror

And a silver spoon

And a broadcast of -

A half-baked story from a fake newsroom...

Parodying the soothing incantations of Goodnight Moon by Margaret Wise Brown with illustrations by Clement Hurd, Goodnight Trump opens in the very classy golden bedroom of the White House, where it is bedtime for the 45th President of the United States.

In this wickedly funny update to the bedtime classic, listeners can encourage this very stable genius to bid a gentle goodnight to some of his favorite things, including his stuffed animal (what else but a Playboy bunny), his best friends from Russia, his Twitter feed, and his 12-pack of Diet Coke.

Goodnight Trump is a perfect gift for those who lean to the left - offering listeners the chance to put America's man-child-in-chief to bed early, so children everywhere can have sweet dreams without fear of being torn from their homes and families.


A story "never Trumper"s wrote & since they can't control him they vilify him.

Entire books just different people reading the same three minute passage.Grab a free copy if you must have

This advertisement/book came up on my Instagram so I signed up for a free trial to see what it would have to say. Unfortunately, it is sure to turn off many in your audience. I will go back to LibriVox, which is free both of cost and