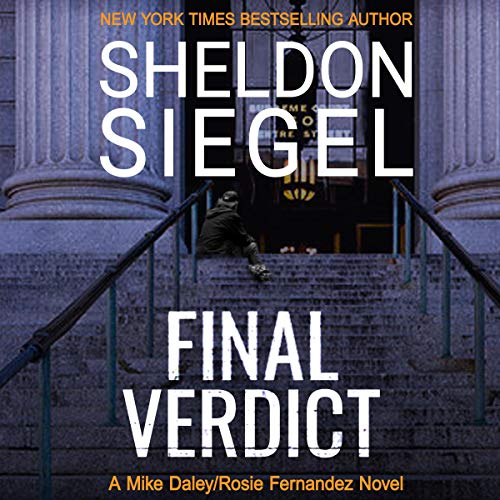 Fate throws a curveball at the San Francisco ex-husband-and-wife legal team of Mike Daley and Rosie Fernandez, when Mike picks up the phone and hears the voice of Leon Walker. This is not good news - Walker was the one who ruined their marriage. Years ago, he and his brother participated in a stickup that left a man dead. Through a series of (some said) questionable maneuvers, Mike got the charges dropped, but he and Rosie fought about it all the time, and it finally drove a wedge between them.

Now, a Silicon Valley venture capitalist has been found dead in a dumpster on San Francisco's skid row. The new murder has been pinned on Walker, but he not only tells Mike he is innocent, he says he is a dying man and doesn't want to go to his grave proclaimed a murderer. Dogged investigation, courtroom nimbleness, and a healthy dose of luck have helped Mike before, but it looks like it'll take more than that to prevail this time, and his time is running out - both on his client and, just maybe, on his partnership.

Story was a little predictable but Tim narrating is the best.
on to the next.

Once again, I couldn't stop reading & listening and, between reading & listening, I got through the entire book in 24 hours and have already started The Confession. The only problem I have with this next installment is that Tim Campbell is not the narrator. I listened to a sample of Sam Guncler's narration but, unfortunately, it's just not the same and that's not an offense to Sam. He's got a nice voice. It's just that, at this point, Mike already has a voice in Tim.

I’ve listened to five of these books in the series and this is definitely my favorite. It’s shorter and the plot is tightly wound. The characters are clearly defined and quite likable. I look forward to the next one in the series.

as usual this series is right up there

I am a big fan of everyone of these. The stories are great and the narrator does a wonderful job. I look forward to each new release. I am also a fan of the Andy Carpenter series by David Rosenfelt.

This is my new “go to” series

It’s clean.
Really well written.
The narrator is absolutely excellent.
This is the third book I have read in the series and you have to love the characters. The fact that I’m a SF native and come from a legal background doesn’t hurt either.
That said, the “legal” side of this series is fiction personified but it’s fun nonetheless and the mysteries are excellent. The characters are relatable so they instantly have become “people to keep in touch with.”

i thought this book was great, much better than book two. narrator was awesome