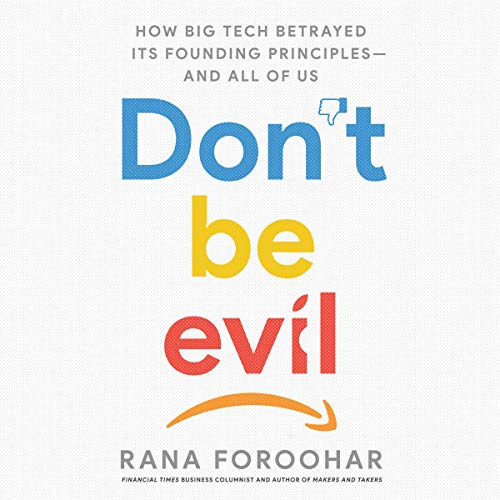 “This book goes beyond the economic problems of market distortion and monopoly power and examines the broader implications for society of the untrammeled and under-regulated Silicon Valley companies. Foroohar demonstrates that while the creed ‘don’t be evil’ may have initially inspired the Silicon Valley giants, its principle has long been left behind.” (Joseph E. Stiglitz, Nobel Laureate in economics)

“If journalism is the first rough draft of history, then we are most fortunate to have Rana Foroohar’s laser vision and trenchant business analysis turned on the tech giants and the gluttonous anti-democratic surveillance capitalism that is their most far-reaching innovation. Foroohar’s examination of Big Tech’s audacity, plunder, and self-dealing economics is a crucial contribution to the growing debate on how to constrain the dark power of the tech corporations, binding them to the real needs of people and society.” (Shoshana Zuboff, author of The Age of Surveillance Capitalism and Professor Emerita at Harvard Business School)

“Rana Foroohar’s new book explains how Big Tech firms have moved permanently beyond the reach of tax laws by leveraging the same opaque financial wizardry and scale that big banks did before the financial crisis, while also exploiting information asymmetries that demote us from citizens to mere consumers. Her urgent message: ‘Yes, we really are living in the Matrix,’ and it’s time to rise up and resist our algorithmic overlords. This book shows us how.” (Cathy O’Neil, The New York Times best-selling author of Weapons of Math Destruction and CEO of ORCAA)

A penetrating indictment of how today’s largest tech companies are hijacking our data, our livelihoods, our social fabric, and our minds - from an acclaimed Financial Times columnist and CNN analyst.

"Don’t be evil" was enshrined as Google’s original corporate mantra back in its early days, when the company’s cheerful logo still conveyed the utopian vision for a future in which technology would inevitably make the world better, safer, and more prosperous.

Unfortunately, it’s been quite a while since Google, or the majority of the Big Tech companies, lived up to this founding philosophy. Today, the utopia they sought to create is looking more dystopian than ever: from digital surveillance and the loss of privacy to the spreading of misinformation and hate speech to predatory algorithms targeting the weak and vulnerable to products that have been engineered to manipulate our desires.

How did we get here? How did these once-scrappy and idealistic enterprises become rapacious monopolies with the power to corrupt our elections, co-opt all our data, and control the largest single chunk of corporate wealth - while evading all semblance of regulation and taxes? In Don’t Be Evil, Financial Times global business columnist Rana Foroohar tells the story of how Big Tech lost its soul - and ate our lunch.

Through her skilled reporting and unparalleled access - won through nearly 30 years covering business and technology - she shows the true extent to which behemoths like Google, Facebook, Apple, and Amazon are monetizing both our data and our attention, without us seeing a penny of those exorbitant profits.

Finally, Foroohar lays out a plan for how we can resist, by creating a framework that fosters innovation while also protecting us from the dark side of digital technology.

Praise for Don’t Be Evil:

"At first sight, Don’t Be Evil looks like it's doing for Google what muckraking journalist Ida Tarbell did for Standard Oil over a century ago. But this whip-smart, highly readable book's scope turns out to be much broader. Worried about the monopolistic tendencies of big tech? The addictive apps on your iPhone? The role Facebook played in Donald Trump’s election? Foroohar will leave you even more worried, but a lot better informed." (Niall Ferguson, Milbank family senior fellow at the Hoover Institution, Stanford, and author of The Square and the Tower)

From fan to disappointment

Truly excited about this book. I support the concept and longed to hear more about how this space got so off track. But ultimately the book is a righteous and political opinion in the people that make up this industry. So much for objective journalism.

A welcome break from the nonstop breaking news.

The book defines our current technology problems in away that is easy to understand.

Very important and timely. Must read for anyone interested in Big Tech and the issues we face from their growing control of our economy and society.

This book was extremely enlightening, but I almost regret being so precisely enlightened. It was a near-apocalyptic view of a dystopian consumer future. It confirmed some of my worst suspicions but also gave me nightmares. The only ray of sunshine was the flashlight beam that the author cast into the darkness occasionally, to show the possible way out of a dark destiny. And the exit depends on a lot of things that are not likely to happen. So, as I said, I almost regret being so well informed. Let’s hope the way out of that future is made easier by this awareness being implanted into our lawmakers and voters... before the exits close!

An excellent look into how big tech has failed us and what is needed to get started on fixing it.

#1. The NeoLiberal and Libertarian philosophy starting with Milton Friedman and the Chicago School have produced a laissez-faire economy which has resulted in greater industry concentration in finance, media and other non FAANG industries. This greater concentration has not historically benefitted the consumer. Again based on changing Anti-Trust rationale (Bork opinion) and enforcement models by both Democratic and Republican administration - no significant forces have emerged to 'counterweigh' mergers and acquisitions - which have resulted in greater industry concentration during the recent time period.

#2. There is no larger context about the FAANG's - regulators are mesmerized by "the shiny technology object(s)..." - have no historical/economic context. Foroohar places the FAANG's in the historical and economic context of the Railroads in the late 19th century UK and US. In this time period they not only owned the railroad itself - but had control of the price level of the goods shipped over the railroad - and could make-break competitors. The 19th Century railroad achieved this by "buying the best Congress - that they could buy" - where favorable legislation was created.

This is an important book amount the outlines of the information society - its rules and etc. One hopes that this book and others like it could start a dialogue with thinking people about this subject. One depressing fact is although this is an important subject area - there appears to be no recognition that a problem exists - much less what the definition of the problem is and even less consensus on what (if anything) should be done about it.

In reading this book - my mind flashed back to when Zuckerberg testified at the US Senate and he was questioned by US Senators who showed that they didn't have a clue. Then Utah Senator Orrin Hatch - asked Zuckerman - "if you don't charge people $ - how do you make money? Zukerberg answered - "$ advertisers pay us...."

The author hurts her credibility by sneaking in Trump bashing and Warren promoting opinions whenever she could. So uncessary and regrettable. Overall, the book is informative but its motive is questionable to me.

Tech Monopolies can be evil

Interesting topic and very thoughtful. It’s a little frightening to think about how much big tech seduces us and tries to control our lives. But books like this one can help us rally against these modern day monopolies.

Good companion to Surveillance Capitalism ... a few years on. Fills in some important gaps.

I read Rana Foroohar previous book, "Makers and Takers" (which was a great book) so my expectations for this book were a bit high. Overall, the book is well researched and written and it's pretty good, but it's not great. She tries to make sense of how the Big Tech companies are screwing over the public. I totally agree. The solution on how to deal with that is difficult to answer. Right now the Internet is like the "wild west" and no one really knows how to tame it. Rana Foroohar posits some ideas along the lines of the EU's regulations. I'm not so sure. I believe this requires a lot more thought. Nevertheless, I believe the book is a good start to having a national debate on how to reign in Big Tech. In addition, I was a bit disappointed with Rana's political bias (she's anti-Trump) inserted into the text. It would have been a much better book if she'd stayed politically neutral and just stuck to the facts and make a compelling argument (just like she did in Makers and Takers). So this book ends with a lot of unanswered questions.