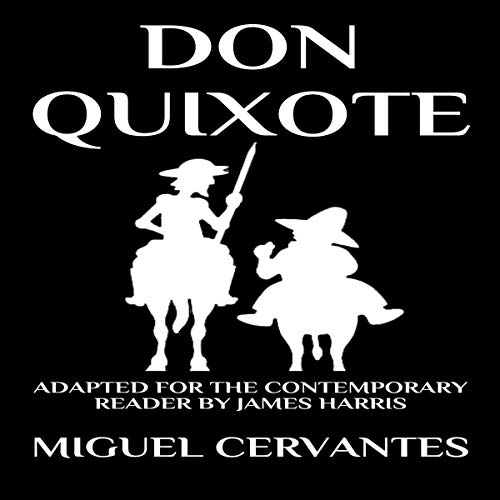 The Ingenious Nobleman Don Quixote of La Mancha is a Spanish novel by Miguel de Cervantes.

Don Quixote: The Complete Adventures - Adapted for the Contemporary Readerに寄せられたリスナーの声

I love to read and listen to classic stories since they set the ground work for all modern stories we hear today. For me, unabridged versions can be a bit much, as some of the story arcs lead me astray and can take away from the overall plot. I have to say, this adaptation really seemed to get me past that hump and made for quite an enjoyable story. I have never read this book before so I’m not sure how much of a difference there is with this adaptation to the original, but it worked out well. I really enjoyed this story and would highly recommend this adaptation.

Jack Henry Kison really sold me on this story. I liked the enthusiasm he brought to Don Quixote and Sancho. It is obvious he really enjoyed doing the narration. I found a lot of the story comical, and I think his character voices and excitement really lent itself to being that. Listening to a 34 hour book is quite a task and Kison did a great job taking me on that journey. My absolute favorite part was his singing and guitar playing, the song was quite awkward and Kison did a great job bringing it to life.

Don Quixote is one of the classics that I had always heard about, but had never read. This audiobook satisfied my curiosity. It was wonderful to have both volumes as a set.

I'm not totally finished yet but i am enjoying the book very much (its a lot of listening). I was really glad the audio version is out as i would never get through the whole thing otherwise. I like how it was reformatted to more modern style. The narrator was enjoyable but i felt like he was consistently over emphasizing the pronunciation of words. I'm glad i got it, great value, great story, good overall narration. I'll be finished very soon.

I had to read parts of this in High School (quite a few years ago). I had never read the entirety of the books. I own copies but every time I look at them sitting in my pile, I become overwhelmed. I made two attempts to listen to this audiobook. The first one was not successful. I guess I wasn't ready and for some reason, I just wasn't feeling it. A few days later, as I was lying in bed ill, I started it again. This time I was able to lie back and just listen (this took quite a few hours of lying back and just listening). This is more of an updated version that was easy to understand. It really is quite a humorous story. There is a good reason Cervantes' book is still as popular as it is, The writing is very well done. There are many layers that will appeal to different types of readers. One can find relevancy in the words today as well as they could when it was first published.

I enjoyed the narration and recommend this audiobook to just about everyone.

A story of a man who has lost his grip on reality and has dove head first into a world made up from the many books he had read. This is an audio book about all the adventures of Don Quixote. This was quite the enjoyable listen. I grew up hearing about Don Quixote but never took the time to read it on my own. So when this audio book came up for grabs I jumped on it. I wanted to know why this set of stories has survived through the years, even various movies have tipped their hats to this classic set of books. I was entertained for many hours hearing the adventures of Don Quixote. The narration was well done and really helped to bring the stories to life. For those looking to familiarize themselves with this classic, this is an excellent way to do so.

A beautiful classic I never studied in school or read..but as many saw the movie Man of La Mancha, To Dream the Impossible Dream!
The book at the very beginning provides you with a perfect visual of Don Quixote physically, what he loved to read, his fantasy of being a knight, hero and protector...also the fantasy of romantic love.
His adventures pursuing his dreams and desires and love are sweet, fantastical and idealistic.
The narrator did a lovely job drawing you into the stories...and as it is a long audiobook it is a lovely way to visit not always all at once but draining it in at different points.
A great way to enjoy a classic you would never regret.
I was given this free review copy audiobook at my request and have voluntarily left this review

This was great fun to listen to! Kept us laughing and thinking as Don Quixote and Sancho encountered ever more bizarre situations.

I hadn't read Don Quixote since high school (that was in '84 lol!), and I found this rendition very enjoyable and entertaining.

Definitely recommended! Check it out :)

I was given this free review copy audiobook at my request and have voluntarily left this review.
Please take a moment to click the "YES" ("Helpful") button below if you found this review helpful :) Thank you!