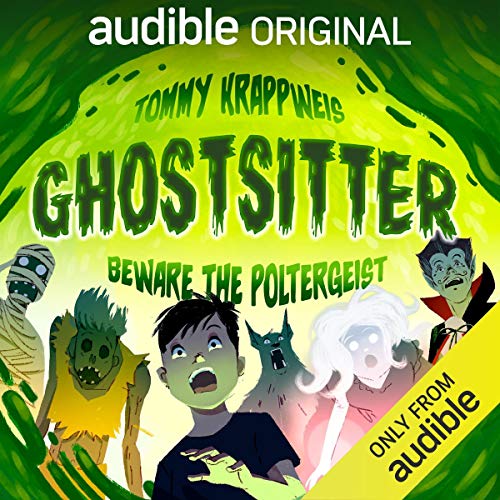 The second installment in the popular Ghostsitter series.

Tom's life changed quite a bit since he inherited a Ghost Train full of living dead creatures. As the fairground is struck by mysterious earthquakes, even Mimi the ghost-girl seems to pale. Vlarad the Vampire has reason to believe that a restless poltergeist haunts the old town square. So, Tom and his undead friends have to go ghost-hunting - without anyone noticing, of course.

The second adventure of 14-year-old Tom and his ghostly companions is full of spooks, gags and some surprises - a joy for listeners young, old, and undead alike.

OMG I love this series!!

This series is amazing and I really hope they produce the rest in English and soon!! I want them all!

Take a fun ride on the ghost train.

Tom and all his undead friends are setting up to give rides at a carnival, but, was that an earthquake? An undead tantrum? Find out what secrets the old town square holds.
Great fun and adventure.

Please translate and record more of this adorable series. I enjoyed the varied characters and the pacing was refreshing.

The Ghost Sitter books are great entertainment! I can't wait for more books in English!!

a easy listen could wait to listen to it. waiting on the others in the series

We loved this series!

The narrators are amazing! They give each character live and we love it! please continue to make more. We want more books!

Rescue a vampire from a roof, ghost from a poltergeist, zombie from a hole, and a town from an ancient curse, all while keeping his undead friends safe from the living: Tom has his hands full. Good thing he can look to his friends and face all the challenges as a team or rather as a family. Heartwarming surprises await you, dear listener. Enjoy!

Just as great as the first book. I love it and hope to hear more books soon.