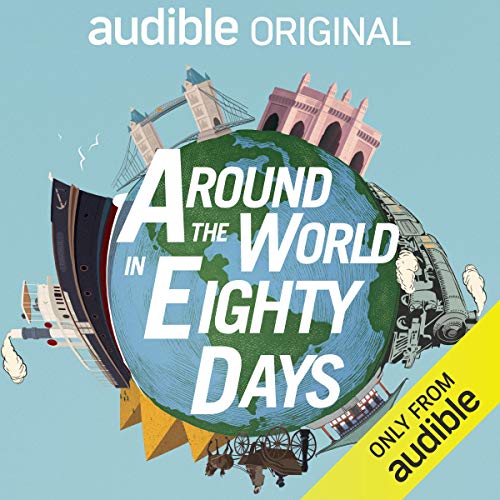 Around the World in 80 Days

Embark on an epic journey in this all-star cast audio dramatisation of Around the World in 80 Days. This new Original drama features best-in-class performances from Golden Globe-nominee, Emmy-nominee and multiple BAFTA-nominee Toby Jones (The Girl, Directorists, The Hunger Games) as Phileas Fogg, George Blagden (Versailles, Black Mirror, Vikings) as Jean Passerpartout and Don Gilet (Eastenders, Dr Who) as Detective Fix amongst others.

One of the most celebrated tales of all time, Around the World in 80 Days is part high-octane thriller, part fascinating fantasy travelogue. Pragmatic gambler Phileas Fogg has made a gentlemanly wager to the members of his exclusive club: that he can circle the world in just 80 days, right down to the minute.

Fetching his newly appointed French valet, Fogg embarks on a fabulous journey across land and sea - by steamer, rail, and elephant - to win the bet of a lifetime.

This was a really fun romp - I love the way Anna Lea adapts classic fiction; she has a really light touch and manages to retain the style and energy of a novel whilst bringing it to life for audio perfectly.
This is a great production - well performed and produced - and the story was a really fun and intriguing adventure for my otherwise boring commute!

Fabulous performances. I so enjoyed everything about this and look forward to playing it to others.

As vivid as the movie

The sound effects, the dramatic happenings were so succinct in the story that gives a feeling of an imaginary movie playing right before your eyes. Thanks to all that got involved in the process and making of the audio book.

I have always enjoyed this book since a teenager, (now a pensioner), but this dramatisation was excellent. Thank you Audible.

good cast, well put together.
but could do with removing music interludes, sounds like it's been edited for a radio drama, with music signalling the end of a section. would rather not have that for the audiobook.

This is an excellent production that flows beautifully. Great acting by Toby Jones and credit to the rest of the cast who bring the story and all the characters to life. Have listened 3 times since purchasing the other day, it really is good clean entertainment that will make you smile. And I did not think I would like it, but I love it. Well done all. 👍

It's a great story, but the adaptation is not for me,, it tears the guts out of it,, and is to disjoint. In saying that the narration is excellent.