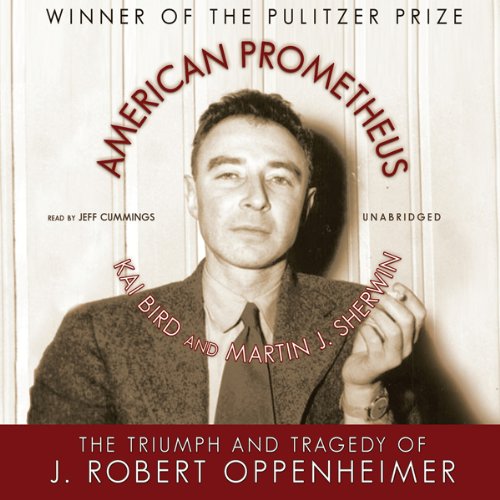 "The definitive biography...Oppenheimer's life doesn't influence us. It haunts us." ( Newsweek)
"[A] profoundly fascinating, richly complex, and ineffably sad American life.... Bird and Sherwin are without peer...in capturing the humanity of the man." ( Booklist)
"A work of voluminous scholarship and lucid insight, unifying its multifaceted portrait with a keen grasp of Oppenheimer's essential nature.... It succeeds in deeply fathoming his most damaging, self-contradictory behavior." ( New York Times)

J. Robert Oppenheimer is one of the iconic figures of the 20th century, a brilliant physicist who led the effort to build the atomic bomb for his country in a time of war and who later found himself confronting the moral consequences of scientific progress.

When he proposed international controls over atomic materials, opposed the development of the hydrogen bomb, and criticized plans for a nuclear war, his ideas were anathema to powerful advocates of a massive nuclear buildup during the anti-Communist hysteria of the early 1950s. They declared that Oppenheimer could not be trusted with America's nuclear secrets.

In this magisterial biography, 25 years in the making, the authors capture Oppenheimer's life and times, from his early career to his central role in the Cold War.

A "Blast" from the Past

Kai Bird and Martin Sherwin have written an outstanding biography in "American Prometheus." It relates the story of J. Robert Oppenheimer from childhood through the Manhattan Project. The book delves into the complexity of this man's personality and motivations. It thoroughly covers his political activism and his professional career. Biography lovers will not be disappointed. The writing is fast paced, the reading is very good, and Oppenheimer comes alive. Perhaps the most valuable contribution the book makes is placing Oppenheimer in political and historic context. The reader learns alot about the era as his life unfolds.

NOTE: My downloaded copy of the book seemed to be edited. The book is still worth the effort, but short portions were apparently re-recorded and inserted into the audio in places. The warmth of the reader(who was excellent by the way) changes abruptly and then jerks back. The pace changes for very brief periods where insertions are made. The volume abruptly changes and then returns. It was a distraction to my ears at least. Don't miss this book if you have an interest, however, for this reason alone.

interesting, but recording is not good

The book itself is quite interesting and well worth it. Unfortunately, the audio editing is not good. The cuts are noticeable as the narrator's volume and tone changes, something I have not observed on any other book I've listened to. There was also at least one occasion where a line was repeated because of poor editing. Finally, the narrator mangles foreign words, especially French one, which is quite distracting.

One of the best books I have read

Although a true marathon listen, this was a fascinating trip throug the history of the atomic bomb centered on J. Robert Oppenheimer's life with many intricate and brilliant connections to the political agenda of the times. I learned more from this book than I did in high shool and although it took may weeks to finish, I would read this book again and will also recommend it to others for a very enjoyable, extremely well written, complex book. A true pleasure.

well worth the time

This book above all is a full and detailed review of a brilliant man's life, including his successes, failures, weaknesses and strengths. Its volume is necessary because of the immense complexity of Oppenheimer's work and relationships. It reveals that great intellect can lead to heroic deeds (manhattan project) and unfortunate missteps (his marital and familial relationships). Most impressively, the authors take great effort to provide insight into the unfortunate McCarthy era and its effect on individuals and the nation as a whole.

Bad editing is my only complaint about this one. Great book, but you can really tell when they re-recorded something or took a break in the recording. Very poorly done and really interupts what is otherwise an outstanding book. I would highly recomend this if you have any interest in Oppie, Physics or civil liberties.

This is a haunting story of a brilliant man, and what the ugly demagogues of the 50's did to him. It captures the man, his charisma, phenomenal mind, surprising shortcomings, and as well his era with it's endless martinis, cigarettes, political naivite and grey-flannel evil. Truly a compelling "read."

The book is a fine description of an extremely unusual man, and it is read with an appropriate level of feeling. The reader, though, should have learned how to pronounce the names of persons and places. A significant number are pronounced incorrectly.

I Have to admit that I stalled on this for awhile, but was ampaly rewarded for returning to this listen and finishing. What a story! what a man! A remarkable book in the end. I would label this REQUIRED READING for the history revealed from many different critical points. Aspects of this book still haunt me. A very well researched, revealing and rewarding read. Well written and narrated

Interesting Man - Reader not so much...

I found the choppy editing of the audio distracting, and the reader's attempts at foreign pronunciation forced. Sometimes it seemed that the pronunciation was corrected, such as it was, by obviously reinserting the word into the audio stream. In addition, the reader's habit of taking on the voices of the various speakers was not entirely successful.
In the end, it was hard on the ears and I stopped listening after three or four hours. Too bad, since the best was yet to come, I hear.

If you have enough patience for this very thorough biography, then you will be rewarded. By the end, I had come to believe that I had a good grasp of who Oppenheimer was, and what he had contributed to the scientific community. I also really, really hated McCarthyism, and felt that the country had done the man a deservice. I had heard much about the events of the Manhattan Project before hearing this, but I knew very little about the early days of post-war bomb development. I found those details especially rivetting.

Spoilt by a very poor recording

Imagine you’re reading a great book: perhaps you delight not only in the author’s skill with the pen, but also that of the typographer who has lovingly crafted the spacing, the line breaks and the hyphenation to ensure that the appearance of the type is as appealing as the story itself. Imagine then, that you turn the page only to find a single sentence set, not only in a different typeface, but also larger and poorly spaced. Reading further, you find odd passages here and there, sometimes just a few words, sometimes complete paragraphs that are set completely differently to the rest of the book. That is the visual equivalent of listening to this book, the recording of which is continuously interspersed with re-recorded passages that have a different quality than the original.

Although I’d read complaints about this in other reviews, I never imagined the extent to which it occurs. In almost every case, it’s a sentence that contains a name that’s either foreign or difficult to pronounce. It occurs so often that you can’t help wondering if it wouldn’t have been easier to have simply re-recorded the entire book. It’s jarring and, for me at least, interrupted and spoilt the narrative.

In a book that, thanks to the nature of its content, is riddled with foreign names and complicated words, you’d think that the producer, at least, would have either checked the pronunciations or chosen a narrator a little more au fait with foreign expressions and pronunciation. It’s very sad, because it’s an otherwise fascinating and well written book.

wonderfully in depth and well read

a really great listen, raising really interesting questions and enabling what feels like a very thorough and nuanced understanding of the man and his life.

A Terrific Narration of a Riveting Life

Before I listened to this audiobook everything I knew about Oppenheimer came either from "The Pope of Physics" by Hoerlin and Segre, or from the internet. The book came to my attention searching Audible for books on the subject and had excellent reviews even if a monstrous length. All the same I decided to power through it so that I could hear the story and was pleasantly surprised to find (almost) perfect narration and quite coherent prose.

The narration was succinct, emotive and enrapturing with very little to fault. The only issues I found were when the narrator got to French words, which were clearly dubbed in later (took nothing away) and the odd 2-second pause to flip the page. At 26 hours that is a mammoth achievement and I commend the narrator for his endurance.

The story itself was a fascinsting and captivating one, even more so than the aforementioned book on Fermi. The book goes into quite a lot of depth about his early life and for good reason in developing the character later on. His academic career is developed but I would say that he did not have one quite as prolific as some of the other great physicists of his era. The real point at which his eminence comes out is when he started workint at Los Alamos, and it is here the most complex plots truly develop. The quality of description of the book on life at the site is something that I found made it superior to the Fermi book, and it seems that this is the point at which the titular character truly shines.

Following this I must say there is not much left other than the trial, and the book gives subtle and indepth coverage of how these played out. I cannot say that I had much prior knowledge other than Teller's role in them, but the way they describe how it came out and the aftermath of the affair gives insight one cannot get from other sources.

This book is a very detailed description of Oppenheimer's life and I was able to follow it all the way through because of the quality of prose and narration.

Not the best audio quality at times where the volume and tone seem to switch but worth pushing through. Superb look into the life of a man with such a great mind!

Unfortunately I returned it.

As others have said, the narration has been seamlessly spliced in to areas where the pronunciation needed to be corrected *sarcasm*. The first splice is the worst. The others later in the book sound like the narrator has decided to put a bucket on his head while talking.

If you have any interest in science, politics, drama, tragedy, philosophy or ethics, this is a must-read.
Only quibble is with the audio quality in some parts of the book but overall a great recording and performance of an outstanding book.

Never knew the entire story of Oppenheimer until I heard this book. The Amazing but sad journey of a intellect is minutely captured in this book. And once again a great narration from Jeff. I always knew Openheimer as the father of the atom bomb - after reading this book I now know that he won’t be proud of that title.

A comprehensive look at the ambiguous life of one of the great men of modern history whose influence can be felt even today.