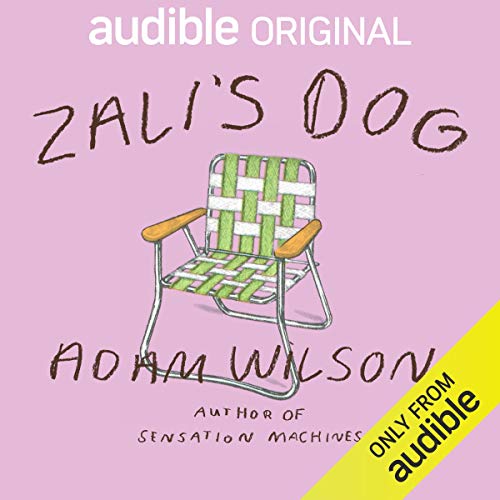 A new story from the author of Sensation Machines.

Philip and his girlfriend Beth were seniors in high school when they chose adoption for their son. Now, years later, Beth has moved to Palo Alto - and on with her life - but Philip still lives in town. He works a job he hates so he can be near Olaf, who knows him as “uncle”.

On the morning of Olaf’s 14th birthday party, Philip hears his neighbor Zali’s dog, Sinai, barking on the other side of the fence. Philip scales the fence and finds the dog tied to a tree with a belt, hungry and scared. Not knowing what else to do - and not wanting to miss his son’s party - Philip stages Sinai’s escape and drops him off at a local shelter.

At the party, a gift that Philip gives Olaf exacerbates tensions between him and the boy’s parents, leaving Philip feeling unmoored. And when Zali abruptly returns from his mysterious absence to find Sinai missing, Philip must try to retrieve the dog before it’s too late. From Adam Wilson, author of the acclaimed novel Sensation Machines, Zali’s Dog is a darkly funny and oddly affecting story about the lengths we’ll go to protect our hearts.

How Not to Tell a Story

Inside this tale is a kernel of good, and its that the birth father LOVES his son enough to follow him and see him. That is where it ends for me. A real father doesn't discuss the p word with a fourteen year old in graphic terms, he talks about sex in a way that will make a boy want more from it than the physical. He doesn't give him a Playboy for his birthday. The birth father wants to be his son's FRIEND, not his father, and herein lies the problem. Parenting is NOT friendship, it is responsibility, it is sacrifice, it is figuring out how we went wrong, learning from it and trying our best to help our kids not repeat it.

This book started out a little off but okay. Within mins they're describing a scene in which an uncle, (also biological father) to a 14yr old boy. Shows up at his B-Day party of an upper class family. With a Porno Mag in a paper bag. Giving it to the 14yr old who has just bluntly & disrespectfully asked about, "How to get pussy." The Uncle states his Father gave him a Playboy at 14yr as well. It's an absolutely demoralizing view of women. That the other continues to talk about as " There's just something about a magazine" versus the internet. Pornography changes the perception of female value, imply selfish acts of male superiority, & widely contributes to unsatisfied sex lives, inability of intimacy, & more & more inappropriate & often illegal forms of sexual gratification. The younger a child is exposed & the more normalized it is. The more complicated & very confusing relationship they will have with sexuality, reality, & pornography. Not into books that set ppl up to become pedophiles at 14yr because their dad did it to them. Even including a scenario in which it was highly inappropriate & out of place to do so. Thumbs Down on this listen, have some class in 2021.

Interesting story line but the end left nothing resolved. What of the relationship with his son? Did Zali get his dog back? Reader is left with the impression that the book was a pointless waste of time.

ZERO ENDING TO ANYTHING!!

1st- if you are against animal abuse- you, like me, will HATE most of the implications going on & what was allowed to go on. To name this book about the dog...very misleading and infuriating! No conclusions to any plot line.

I’d love to see more of this type of writing in short story form. It was wonderful, vivid language and imagery and the kind of abrupt ending that is one of the best parts of literary short stories. Love love love!!

I am a Dad, and I would never discuss the topic of sex with my young adolescent son the way it is written here. I do believe it’s thoughts and ideals like this that has helped destroy the image of a true Man, who treats women with respect and honor. Aside from the fact that true Gentleman don’t kiss and tell especially in such a vulgar manor. I’m glad this was not an image I can relate to with my own son. This was only one of many items that didn’t sit well with me in this story.

So...what happened to the dog

I do love Audible Originals and this story maintained that high-level of performance and story. The ending was a let down though. You can't have a story about Zali's dog and not tell us what happened to the dog?! Still, I enjoyed the listen.

It was a cute story, but I struggled staying focused and found myself watching the time go down. Waiting for the story to be over.

A waste of 30 mnutes

The tale of two wasted lives and the dog ends up at the pound. Stupid and too short.