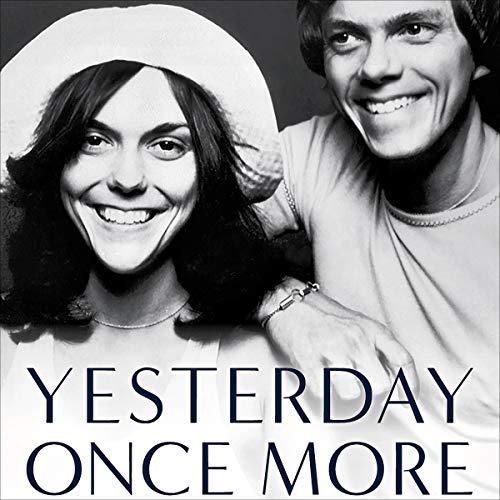 With a string of number-one hits showcasing Karen Carpenter's warm and distinctive vocals and Richard Carpenter's sophisticated compositions and arrangements, the Carpenters were responsible for some of the most popular music of the 1970s, and this compendium collects more than 50 articles, interviews, essays, reviews, and reassessments that chronicle the lives and career of this brother-sister musical team.

Writings from pop journalists and historians such as Daniel J. Levitin, John Tobler, Digby Diehl, Ray Coleman, Robert Hilburn, and Lester Bangs provide insight into the music and personalities of the duo who produced such timeless pop music. From serious musical analyses of the Carpenters' arrangements to lighter pieces in which Karen and Richard discuss dating, cars, and high school, this new edition has been revised and expanded to include nearly a dozen additional pieces, some of which have never been published.

What disappointed you about Yesterday Once More?

Let me say first that I am a huge Carpenters fan. This book was a train wreck. No symmetry, and full on cheese. Transition quotes like "they had only just begun..." etc... Absolutely nothing revealing in this book, and I knew nothing going in. If I had a dollar for every time the narrator says "Close To You" or rattles off their Grammys I'd be loaded. Just an awful, awful read. The narrator sounds like he's reading a script, like some cheesy documentary.

What could Randy L. Schmidt have done to make this a more enjoyable book for you?

Not sound like a tv journalist. The only thing missing was "...and that's the news. Thank you, and goodnight."