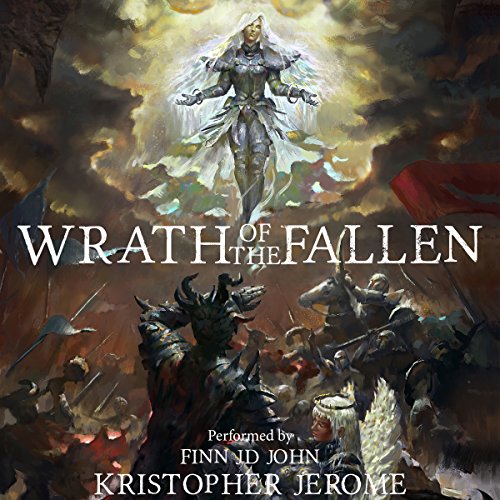 Wrath of the Fallen

The Mortal Plane has long been divided among the servants of Light and Darkness, suffering a thousand years of atrocity by both sides. When one god finally rose up and slew another, The Pact was formed, forestalling any further damage to the realms of men. But now, over the last few decades, signs of the Demons and their mindless Accursed minions have dwindled to an all-time low. It seems that after a thousand years of conflict the Gods of Light and the Gods of Darkness have finally tired of the bloody war. Or have they?

It falls to Trent, a Paladin of the Light with a soul torn with an impossible and unrequited love for his commander and scarred by a childhood filled with despair and pain, to travel beyond the walls of the city to discover what has become of humanity's ancestral enemy. Only with his closest friend Devin by his side can Trent hope to keep from losing himself. Together the two men track a horde of Demons to a secret that will rock the Mortal Plane to its very foundations.

Slow at first but the story picks up. Should be a good series. I definitely recommend

What made the experience of listening to Wrath of the Fallen the most enjoyable?

To be fair I haven't finished. however the book is captivating and thought provoking. It helped me stay awake on a long drive which is where I tend to listen to audio books. This is great fantasy novel that has kept me enthralled.

What was one of the most memorable moments of Wrath of the Fallen?

I haven't finished yet so I don't know however if the end is going where I think it is, the whole book will be quite memorable.

What about Finn J.D. John’s performance did you like?

I read the complaint about not liking the "ghost whisper" for the characters' inner monologues; however I enjoyed it. I think it was a great addition to the listening experience. I could differentiate between the characters and their thinking vs speaking. To me this was a huge improvement to other audible listening. In some books they make no distinction of thought or voice and that too often gets confusing. It also left out the redundancy of having to say "Trent thought to himself" or "Ren said."

"The world is out of balance, and only chaos reigns."

Do you remember the voice from Field of Dreams (if you build it they will come?)
Well the main character as well as several others have these inner monologue parts throughout the book. Not that this is a problem....but the voice is that ghost whisper. That ghost whisper is the same for all characters and makes up about 15% of the book.

Is it bad enough to skip the Audible and just get the book? Almost. By the 20th time you hear it you start to cringe.

Books was enjoyable, I would suggest you stick to print.