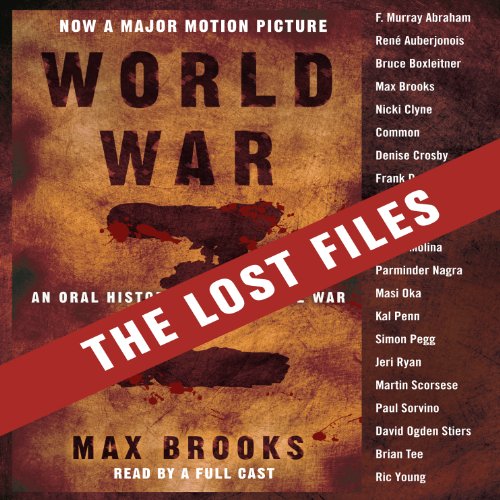 Save your Credit - Nothing New Here!

I loved the audio book World War Z, so I was excited when then companion became available.

But there are no new stories here, and very few additional details to the stories in the original. I will be returning this - definitely not worth a credit.

Loved this addition to the abridged version!

I listened to the Abridged audio months before I finally read the book. As I read, I was disappointed to see how many stories had been left out. I am very happy to have found this addition to the abridged version.

So much better than "Walking Dead" as you get a planetary perspective of stories taking place all over the Earth and Space above it.

Doesn't Include The Whole Book

But major stories, including many of my favorite were not included for what ever reason. Do not buy if you're expecting most of the book, this is merely highlighted notes with a couple new stories (that are fairly good as well)

The major downside to this is that since many stories are missing, new people to the series would know what a quisling, south African plans, or what even Lobo's are due to the lack of content. So at points, it won't even make sense unless you have read the book.

The voice acting is very well done, I have no complaints except for the zombie moans. 9/10 on the actors.

I'll happily give 5 stars if it ever becomes unabridged. Until then, avoid it unless you want a sloppy audiobook. (Read the book, it's 6/5 stars)

The performers were just reading.

The readers were a little bland. not how I had read it in my head.

It's the same book

There's little or no new stories. It's just world war z in an odd order missing certain stories. No 20$ worth of material

Repeat stories from the full version

Had I known this was just a repeat of several stories from the full version of World War Z, I wouldn't have bought it. I would only give it 5 stars had I not bought it!

If you’ve listened to books by Max Brooks before, how does this one compare?

Repeat stories from the full version.

The story synopsis should have told us that this was the same stories - Nothing new here folks, move along -

SO MAD - This is not new stories

Several key stories are omitted from this version, including the Battles of Yonkers and Hope, The Honolulu Conference, and the actual description of the Redekker plan.

Just as interesting as the first one. The characters are very entertaining. T Shawn is one of my favorites.