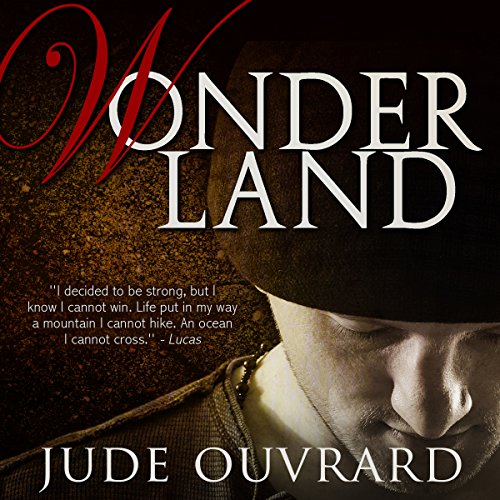 Lucas Colton is far too young to go through all this pain, but meeting poetry teacher Preston Davidson changed everything. His life went from heartbreak to joyful and then from friendship to love. The impact Preston had on Lucas's life was mesmerizing. What would you do if you knew you may not have a tomorrow?

It's a gay romance short story with a bit of poetry and plenty of different emotions.

Would you listen to Wonderland again? Why?

YES! It is an inspirational story

What was one of the most memorable moments of Wonderland?

Have you listened to any of Nathan Huddleston’s other performances before? How does this one compare?

I've never listened to Nathan Huddleston, but his voice was PERFECT for this story!

The final scene brought me to tears

Lucas Colton had a bad breakup with his significant other, back in Boston. Cast out by his parents for being gay, he moves to New York to live with his brother, Julian. Lucas enrolls in a poetry class and upon reading one of his poems to the class, his professor Preston Davidson realizes the talent this young man has. After class, Preston asks Lucas to stay and they strike up a conversation, which leads to having coffee and a developing friendship. A friendship that runs deeper and evolves into the two falling in love. Unconditional love, not laced with sex, but of compassion.
Ms. Ourvrad has written a poignant tale about a man who has a terminal illness and is seeking love and acceptance before he dies. While this is a tale about two gay men, it could easily be about a heterosexual couple. There is no sex in the story - rather a tale of acceptance and true love. So eloquently written, I would recommend this to everyone. Nathan Huddleston's voice was perfect for the character and he did a superb job displaying the emotions of a man who's time in limited and resolves to make the most of every minute. Have a box of tissues at hand...this is a tear jerker...

I love this story. It was heartbreaking, but a true love story at the same time. I listened to the story in one sitting. The narration was good, but I wanted to speed it up, but it fit with the circumstance. Highly recommend.

A sweet and sad short story of love and loss. The writing wasn’t bad. The narrator was appropriately emotive at times and at other times sounded like he was cold reading. Rather halting and strange. Would’ve enjoyed more with better narration but the story itself was sweet.

Lucas is dying, he expresses his feeling through his poetry. Preston is making sure his last days are the best he ever had. This is an emotional, heartbreaking, poignant story of living his last days to the fullest. Poetry is what united them, and brought together their souls. He gave Preston his last poem right before passed. Oh I cried when listening to this touching story, for Lucas finding his soulmate and the short time they had together to find their love.
Nathan Huddleston tells this beautiful story with so much love, emotion and compassion. He captures the personality of each character perfectly. I was gifted this audio and offered my honest review.

All I can say is wow! This story was so touching that I had to cry! Jude Ouvrard has written a beautiful story that really blew me away. Nathan Huddleston narration was perfect and definitely one that I will follow.

Still has emotion for being so short

While I enjoyed this story. It is heartbreaking. Only to find love while nearing the end. GAH! How horrible for both! I loved the journey they did take together and how open minded Preston is. I would be Debbie Downer for sure. The poems in here were wonderful! This is a short quick read into the life of Lucas. The epilogue was the perfect ending.

I listened to this on audio. Nathan Huddleston did a good job.

Lucas and Preston meets at the end of Lucas’s life.
It is about how to get out the most in your last weeks in your life. A wonderful story, I wanted it to be longer.

Jude Ouvrard - yet another wonderful book

The person telling the story sounded like a second grader. The book had potential and kept me listening even with the awful narration.

Really good book. Short sweet and to the point. I really enjoyed listening to thos

This book floored me. It was so emotional, which is not my favorite(I hate it when they make me cry) But this book is so good.A true love story. Definitely worth the time to read. #AudiobookObsessionReviewer