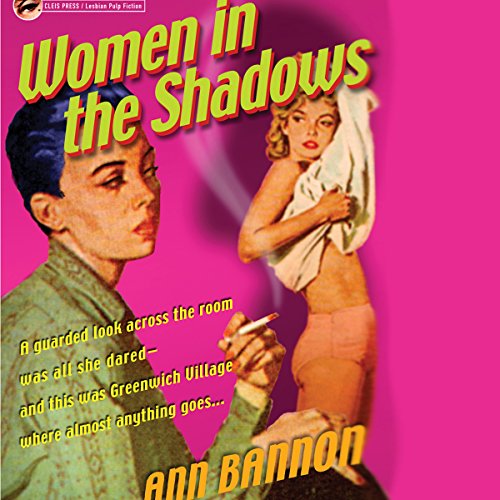 Designated the “Queen of Lesbian Pulp” for her series of landmark novels beginning in 1957, Ann Bannon defined lesbian fiction for the pre-Stonewall generation. Following the release of Cleis Press's new editions of Beebo Brinker and Odd Girl Out, Women in the Shadows finds Laura in love among the lesbian bohemia of Greenwich Village. This edition features a new introduction by the author.

No. 3 in the Beebo Brinker Series.

In this, the third book in the chronicles, we continue to follow Laura as she experiments with and learns about love through various relationships. The dominant and darkest one was with Beebo Brinker, who was so desperate to hang on to Laura that she kept track of her every move, abused her and finally did other things to try to keep Laura in the relationship. Also in this book, we see Jack finally deciding that he needs to find a woman to marry to protect him against continuing to fall for young pretty boys who don’t stay with him, in his mid 40’s now. He finally convinces Laura to marry him. The idea is that they will each continue their gay relationships, but every night they’ll come home and eat together, and be together for the night,(not sexually of course) and start the day together in the morning. This marriage brings its own complications as previous lovers continue to interfere with both Jack and Laura. Bannon in this book brings forward some of the bleaker problems faced by lesbians in the 1950’s where the only place to meet people was in the gay bars. My least favorite book of the series. But also very revealing of the times.

Brace yourself the third in the sires is a kick to the head and know mistake ,Ann got raked over the coals especially for this one because of it's content ,not for the faint hearted , Beebo and Laura are at braking point and there not shy about it I all most gave up on them both but well you'll see.
written in the fifties with fifties values these stories and this one in particular reflect this ,I love these books and I thank Ann Bannon ,and the Narrator she is amazing.

You really have to be reading this book as a “look how far we’ve come” rather than as a novel. Notwithstanding the author’s apologetic at the end of the book, the story is horrifying; no gay relationships - male or female- could POSSIBLY be healthy, brutality is the accepted norm of all gay relationships, “real strength” is only found in a man, carrying a pregnancy makes one a “real woman,” mixed orientation marriages are the best solution, and one demonstrates truly passionate and romantic love by slicing open the family pet. Seriously, read this as you would a very graphic book about female genital mutilation written by a man demanding it from his daughters . It may be a subject that must be studied and a point of view that must be understood to be defeated, but it’s nothing you would read for pleasure.

This was a great puzzle that will never be complete. Heartbreaking, confusing, and frustrating. And greatly held my attention.

So good, but subject matter is heartbreaking

Such a good read, but the subject matter is absolutely heartbreaking. Laura is my favourite, but even her choices are problematic.

Bebo Beeker continues on and Laura there too!

Only if there they are a hard core Bebo or Laura Fan, for me, it;s so sad what's done to poor Bebo who always gets the short stick and the same with Laura, why can't they just have a happy ending:, no men involved, not that Jack is happy either, no gays are allowed to be happy, only as a switch they do seem to be keeping some of there dignity, but only if you read between the lines. This is a story written as a dime story novel in the 50's or 60's back when it was a law that you could not have happy well rounded gay people and Bannon did her best to stay with in the rules of the time but offer up at least an interesting group to follow.

Would you be willing to try another book from Ann Bannon? Why or why not?

Yes, darn it, I will be getting the next in this series until I finally reach Bebo Beeker, Way back in the 80's I read, Odd Girl Out and Bebo Beeker never knowing they were a series. If I had know I might have read all 5 books if I could of found them, I was reading them pre-internet, way back when you had to drive all the way down to downtown Denver (I lived in Boulder my hometown) and go to the only lesbian book store in 100 miles radius. Or later on take a chance on a book you read about in the back of the book and send of for it to the publishers and buy direct but that was just coming into vogue as the internet went up. You got magazines in the mail from companies like this one gay music company that sold CD and you could buy music from them mail order. It was a brave new would, and people didn't yet have PC at home. Can you imagine. Or if they were like me, my PC was just a word processor that I wrote my test on and keep my poems and short stories on. And I stored them on 3 1/2 inch floppy disc. Which beat my father's 5 inch floppy disc that actually flopped. And besides you had to know APL to use his computer to actually do anything with it. That got old fast. Mine at least had a word program with it. Even if the printer was dot matrix. So yes I would buy another Ann Bannon book.

Would you listen to another book narrated by Kate Rudd?

Yes she really does a go job bringing Laura alive, and telling us what Jack and Bebo are up to. This is mostly told through Laura's POV which is how the series started.

Was Women in the Shadows worth the listening time?

Yes, because I am a sucker for this soap drama 50/60 style world were you can still be arrested for just being gay and out in public. It's a scary world I never lived in because of people like Bebo and maybe even Laura, who fought the war for us all those year ago, and over 50 and things are still changing in my life, I never thought I would live long enough to see gay marriage, and yet it coming fast, yo-yoing around all the states until congress acts. but I might get to see it before I die. And books like Bannon's remind us why we have to keep talking and fighting. To see how far we have come. So yes it is worth listening too.

Bannon was a good writer of dime story novels, but you have to understand they were written as dime store novels, they were not meant to be positive gay role models, they were to scare people straight wink wink nug-nug; And she did the best she could under those guidelines of her times to give us strong characters worth caring about though they have many faults, and we would not still be read/listening to them 4 or 5 decades later if she had not created something special and worth our time.