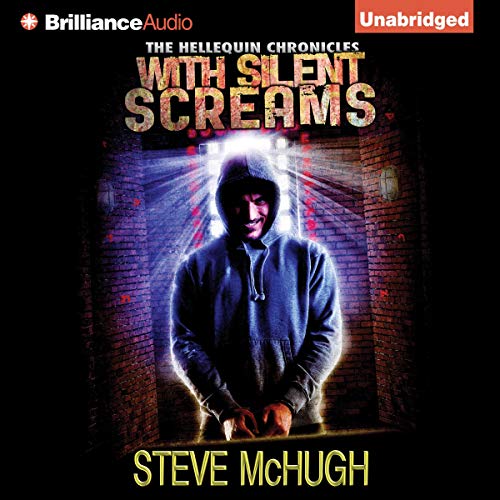 His name is Nathan Garrett, but he’s also known as Hellequin. And murdering one of his friends and trying to blow him up is a good way to get this centuries-old sorcerer’s full attention… An old friend’s dead body, a cryptic note, and an explosion that almost costs him his own life propel Nate headfirst into a mystery involving a new threat from an old foe. Now he must piece together the connections between a grisly series of tattooed murder victims, an imprisoned madman, a mysterious alchemist, and a deranged plot to usurp the throne of the hidden realm of Shadow Falls, rival to the power of Avalon.

Can Nate avert the coming slaughter, or will he become the latest to fall in this clandestine war?

With the story careening between modern-day New York and Ontario and 1977 Maine, With Silent Screams continues the gritty and action-packed mix of urban fantasy and ancient mythology that mark Steve McHugh’s popular Hellequin Chronicles.

Action, Adventure, wizards and even trolls!

This is the third book in the Hellequin series by Steve McHugh. This is a tightly written, action filled novel. The story hits the ground running and doesn't let up until the end. With Silent Screams is a stand-alone novel but will mean more if you have read the previous books first.

As with the other novels, this book moves between the current time and an event in the past related to the current issue. Think highlander but with wizards. It is easy to like the main character and there is enough mystery about him to keep you engrossed throughout the story. He's definitely a guy you'd like to buy a beer and listen to his stories. The magic system, while a bit vague, is fun, structured and makes sense in it's own way.

James langston performs this story and does an admirable job. Admittedly, he took a bit of getting used to, but by the third book it is like revisiting an old friend. I was eagerly awaiting this novel and Mr. McHugh definitely did not dissappoint. If you are fans of urban fantasy series like Dresden Files, Iron Druid, Alex Versus or Peter Grant you will enjoy this one as well.

Please note that for the most part this one is friendly to younger readers but he does throw in a sex scene or two that may be deemed too explicit for younger listeners.

Another excellent read in the series

This series has become a favorite of mine. The character development gets better with every book, the plot is well done, the flashbacks are well-timed and add to the story, and the overall writing is excellent. Combine that with a great narration and you can't go wrong!

These get a bit better with every book. The plot a bit more complicated. I always like the characters.

I like that this series has the same narrator for every book. He does a good job.

If Dresden had a dark side.

I'm so happy that I found this series it is the urban fantasy that I have been waiting for one that is made for an adult audience.

when comes the next book ! ?

Would you listen to With Silent Screams again? Why?

yes... I would listen to all the series again... especially to refresh for a new book.

I have withdrawal syndroms... I really want to know more ;)

This is a well-told story that is brought alive by an excellent narrator. Enjoyable.

WITH SILENT SCREAMS BY STEVE MCHUGH is the third in the HELLEQUIN books.
Nate must solve the mystery of the murder on one of his friends.This friend is a human cop and his wife and,as always,when someone murders or harms one of Nates friends , Nate is not only seeking answers but revenge.

I have been a longtime fan of the Hellequin series and with each book it keeps getting better and better.
James Langton,the narrator keeps the story moving and the characters flowing.

Another Great Story by Steve McHugh!

I love the Fact his stories are easy to follow if you have not read the Series in order and if you have he spends just the right amount of time catching you up! Fantastic story telling! Yu won't want to stop once you start!!

I stumbled onto this series and have been thoroughly enjoying it! This book was no exception. There's plenty of action and excitement to keep me interested and even a little steamy scene in each book.

The character development is great and I'm loving learning more about Nate and his friends through their long lives.

This narrator is still perfect. I love his voice for Galahad, I can picture this character when he talks. Now onto the next one in the series!

This series just get better and better!!! I love the intensity of the action. Nate is fast becoming one of my favourite characters.

Would you consider the audio edition of With Silent Screams to be better than the print version?

Never read the print version, don't have time for text :)

I was a little dubious about listening to this series at first, the story seemed quite simplistic then BOOM! I was hooked. The characters are interesting, and at times you are left wanting more and more. I'd recommend this series to anyone looking for something a little different.

Did James Langton do a good job differentiating each of the characters? How?

Yeah - didn't forget a voice style for anyone, he seems to get better as the books go on. No over acting as you find with some books on audible

Humorous at times, no tears but you want him to kick some backsides and he REALLY does!

This series is well worth the time. I hope you enjoy.

Excellent book however the first two were more gripping. Still epic and I love this series.

Hellequin is a geezer !!!

The books in series are just getting better and better. I've read a fair few fictional series and trilogys and these are shaping up to be the best

Am loving Steve Mchugh's books after reading his work for the first time just a week or so ago. Going to go on to the next in series right now !

Loved it. This is another series I will enjoy listening to again and again. The writing is enthralling, once I start I have to know what happens next. Great book to the author write more, to other readers, listeners buy more and enjoy the ride I will.

I love this set of books .

Brilliant . makes you sad when you have finished the books . so you 're start

Enjoyed this enough to buy rest of the series and re-read before starting last book.

Enjoyed listening to this book, plus all the others I have already heard. Full of humour, sarcasm and with a touch of no-nonsense to it. Absolutely marvellous!

This series keeps getting better and better the characters are engaging and like to know the story line captured me and I finished the book very quickly. I would highly recommend this series for any fan Of urban fantasy