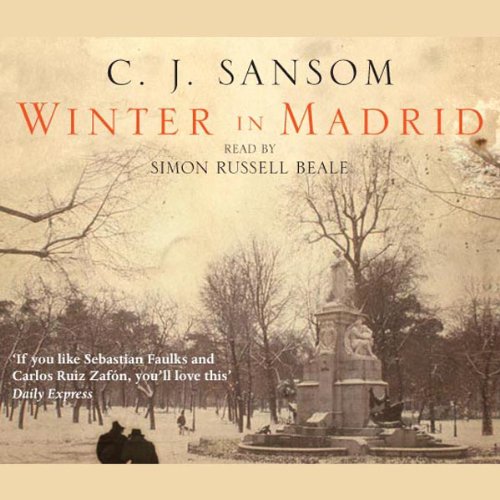 1940: The Spanish Civil War is over, and Madrid lies ruined, its people starving, while the Germans continue their relentless march through Europe. Britain now stands alone while General Franco considers whether to abandon neutrality and enter the war.

Into this uncertain world comes Harry Brett: a traumatised veteran of Dunkirk turned reluctant spy for the British Secret Service. Sent to gain the confidence of old school friend Sandy Forsyth, now a shady Madrid businessman, Harry finds himself involved in a dangerous game and surrounded by memories.

Meanwhile, Sandy's girlfriend, ex-Red Cross nurse Barbara Clare, is engaged on a secret mission of her own: to find her former lover Bernie Piper, a passionate Communist in the International Brigades, who vanished on the bloody battlefields of the Jarama.

In a vivid and haunting depiction of wartime Spain, Winter in Madrid is an intimate and compelling tale that offers a remarkable sense of history unfolding and the profound impact of impossible choices.

"This multilayered novel is up there with Greene and Le Carré. War-torn Spain, the deadly forces of political intrigue and the passions of these enmeshed human victims are powerfully evoked and the narration is masterful."( Observer Review)
"Brilliantly read by Simon Russell Beale and his delivery completely enhances Sansom's superb creation of atmosphere and characterisation. A stunner." ( Daily Express)
"Sansom adroitly draws the disparate strands of his ambitious saga together. His non-pareil evocations of time and place anchor his characters with satisfying precision." ( Independent)
"Few authors have the ability, or capacity for research, which allows them to capture the mood and atmosphere of a period in history, so when one does, and does it as well as CJ Sansom in Winter in Madrid, then they deserve not only praise but success." (Tony Galvin, Dublin Evening Herald)

I put off this book for a while, fearing a boring "costume drama". But this is anything but. It is the story of 3 men who went to public school in England together, and who meet in Spain during WWII in varying circumstances. The book jumps between various time periods (which can sometimes be confusing -- I wish the narrator had more clearly separated these sections) but which gives a fascinating insight into the characters. It is a spy story, a love story and a war story. Finally, the narration here is simply the best I have heard. By subtely altering his voice the narrator makes the characters come alive in the listener's mind without overdoing it. Pace is perfect, and the narration becomes "transparent" as you become afixed to the story.

A well written and narrated novel set around the Spanish Civil war. It explains a little of the history and atmosphere at the time in the natural flow of the story.

Nicely narrated and an easy listen it is perhaps too harshly abridged when compared with Dominion by the same author on Audible that was much better as unabridged.

Great spy story in the Le Carre / Greene tradition but with a very interesting setting around the time of the Spanish Civil War, giving some insight into the suffering of the Spanish people after several years of war and with threats from many quarters with people determing their allegiances to the various factions fighting within the country and with ambiguity as to who's on whose side and where the threats are coming from. Interesting characters and good pace - I found this to be a compelling listen.

The narration is so sombre I've had to give up. I'm sorry to say that the downcast narration ruins the story.

The narration is so sombre I've had to give up. I'm sorry to say that the downcast narration ruins the story. There is no range of emotion, just boredom. As if the main characters are idling away a non eventful afternoon.

In parts horrific it is important to know what happened in the Spanish civil war and this book marries important history with a thrilling story of escape and intrigue.

Another wonderful tale from C J Sansom which enthralled to the end. He weaves history and drama so seamlessly.

I have read this book some time ago but as unwell wanted an easy read! This was great do l totally recommend it .

C J Sansom can do no wrong

Would you listen to Winter in Madrid again? Why?

I really enjoyed it, but would like to listen to others from this author rather than listen to a story again.

One of the best audiobooks I have listened to, I found it hard to drag myself away. An exciting plot very well delivered.

The book met my expectations. I particularly liked the narrator, who was able to mimick the different accents so well.

Good story wanted it to continue for a little longer.narrators female voice made me chuckle.