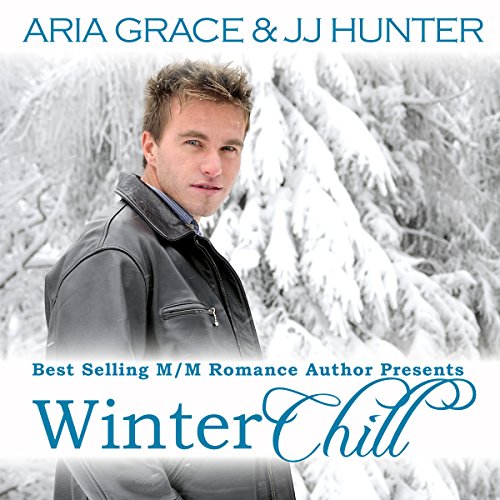 Indie Walker started college with a basketball scholarship and a plan to stay focused on his studies. His roommate and best friend Daniel is one of the most popular guys on the wrestling team. When a power outage during a winter storm forces them to get closer than ever before just to survive the night, their relationship changes forever. Neither are gay but the physical chemistry they have is undeniable. Unfortunately, Daniel's issues at home might be too severe for them to overcome.

Solid Gay for You type story.

What did you love best about Winter Chill?

I really enjoyed seeing the story through Indie's eyes as he navigated his newly discovered sexuality.

That slight Wisconsin drawl in his voice that seemed to fit the area the story was set in perfectly.

It was just a fast, fun read.

Andrew ‘Indie’ Walker has never had a girlfriend, but he’s never given any thought to the possibility of being gay. When a winter storm forces him to share body heat, and a bed with his handsome roommate Daniel, Indie starts to realize that he is attracted to Daniel on a personal level. The two decide to accompany each other home for the holidays, first to Daniels home where late night walk in the park leads to their first kiss, a heated exchange up against picnic table. But Daniels destructive home life soon gets in the way and Indie flees to his own home town, fearing he’s not only lost his best friend, but lost something he can’t put a name to just yet.

I was pleasantly surprised at just how much content this short story contained. Grace and Hunter give the reader detailed insight into both young men’s lives and emotions. My favorite aspect to this story was the inner monologue for Indie. Andrew Walker, lovingly dubbed Indie by his little sister who couldn’t pronounce his name, is a very confused young man. The story is told through his eyes as he navigates his ever growing feelings for his best friend. A virgin who has never been kissed, much less had a sexual experience with a guy or a girl, Indie slowly comes to terms with the fact that not only is he gay, he is in love with Daniel.

My only issue with the story was how quickly Daniel went from adamantly proclaiming, I’m not gay, to I love you and can’t live without you. Perhaps it was because the focus of the narration was with Indie, but I didn’t quite get the mind change for Daniel. Regardless I was so engrossed in this story about roommates and best friends turned lovers over Winter break. Narrated by Michael Pauley who either has the accent with that slight Wisconsin drawl as an undertone, or he adapted it flawlessly for this story. The tones and inflections he chose for the characters were perfect for their part in the story.

Short, sexy and steamy while being well written, full of content and perfectly told by Pauley. If you are a fan of Gay for you type stories, young love, and stories about discovering who you are then you’ll surely enjoy this book.

I loved this book.
I loved Indie and Daniel.
Indie is learning who he is and what he wants. Daniel has a clingy girlfriend he can’t seem to get rid of but he has feelings for someone else.

The attraction is both sided but neither of them know it. They are forced into each other’s space and things start to heat up.

I loved Indie’s family, everyone’s family should be like his. Daniel’s home life isn’t so good at all. That step mother needs to go. I am glad the father finally saw the light I am glad he didn’t blame his son.
Daniel seeking out Indie really was sweet and I liked the narration for this one.

Indie and Daniel are college roommates and good friends. A power outage forces them to get closer in order to stay warm. This leads to feelings that neither of them can deny any longer.

I've listened to a few audiobooks performed by Michael Pauley. Some of them I've liked OK, others have been really good. Winter Chill is one of his best among the ones I've listened to. Sometimes his voice has this breath-y quality that kind of bothers me but I didn't feel that with Winter Chill. His voice conveys a wide range of emotions for Daniel and Indie as they explore their new-found attraction.

The story is really a good one, I actually read it a couple of years ago, but I think Michael's performance made it come alive and I could feel the emotions of Indie and Daniel through Michael Pauley's voice. For a relatively short audiobook (a little less than 3 hours) there's a lot of stuff packed into the story and I'm very happy that I listened to it.

This was a quick read but so sweet MM first experience. I love the way the various themes were introduced and dealt with. The chemistry between the characters, the heat of their explanations was really hot! Totally enjoyed this read

Sweet and hot while in the cold

I love stories where two straight men discover they aren’t as straight as they thought. I liked the story a lot and it had some plot points you don’t see a lot of. Michael Pauley is one of my favorite narrators.

They say college is the place to try new things. Aria definitely presented that story. It had so many sweet moments! I few “oh no” moments as well as a little suspense. Overall it was a great story 😍

as great as the ebook

The story is always full stars, because if I wouldn't like the story as ebook, I wouldn't listen to the audiobook.

The performance from the narrator is also very important for me. I can't listen to a lot, because my English as a non-native-speaker isn't so perfect to follow a whole story over hours, when the narrator speaks too fast or too sloppy. Normally I have to SEE the person, who is talking to me in English. Michael Pauley/Dean is one of the 8 narrators (so far), I can listen without break and have no problems to follow. I'm just not yet finish with the book, but I listen enough to give a review.

This story was a pleasant surprise for me. I was LOL from the time I started listening, until it was almost over. The end was sweet. Two well developed MC characters, who were portrayed through the Andrew’s experience, in a fun and relaxed way. Ms Aria presented a friends to lovers story that grabbed my attention and had me listening straight from beginning to end. And Michael did his thing as he always does. Yes, I look at who’s narrating the story and he’s a safe bet that it’s going to be good. Five stars across the board. ❤️

This is a sweet very low angst romance of two college students learning who they are. The narration is done very well. Great short listen.

New to me authors, college romance.

This is a beautiful but straightforward college romance, Indie and Daniel are roommates, but Indie has a secret crush on Daniel.

Things change between them during a winter storm, but everything goes wrong when they stay at Daniels parents' house.

It develops into a great book, well worth the read—young, exuberant love and sex.

As I listened at 1.40 on Audible, Michael Pauley did a great job, clear, precise, and easy to listen to.

I received this audiobook for free, and my review is my opinion and an honest review.

Sweet, romantic and innocent. It is written with a light easy touch and te audio reader has an appropriate style as well.