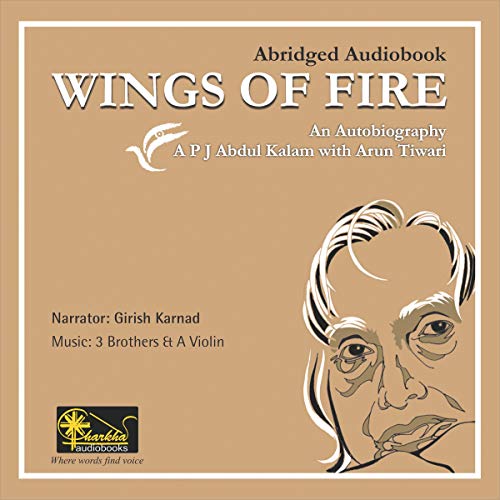 “We are all born with a divine fire in us. Our efforts should be to give wings to this fire”. President Kalam’s inspiring autobiography has touched the hearts of people all over the world. The book talks about the his humble beginnings in a small village in Tamil Nadu and his ascent to one of the most powerful positions in the country.

The song could have been avoided

Thanks for reading this books.Songs break the flow of the book... light music is fine. We salute Dr. APJ

I loved Girish Karnad’s voice. He did an awesome job. Kalam is an inspiration and what a sense of pride we get learning about this simple but very extraordinary man. So refreshing !!

Dr Kalam has been a cosmic source of inspiration for a huge number of people of Indian origin due to his incommensurable achievements in science, missile and space technology. His far-ranging contributions as a scientist, a statesman, as well as a poet put him in the most unique position of being able to make technological contributions, affect societal change, as well as communicate his thoughts and dreams to a wide audience. For a man of his eminence, he also had quite a singular proclivity towards taking immense interest in personally corresponding with children via mail/email, with the sole motive of educating, guiding and inspiring the younger generation to dream big. As he famously said in his own edifying tone, there are 4 steps to success - Setting the goal, Acquiring knowledge towards that goal continuously, Putting in hard work with devotion, and lastly, Perseverance.

The book provides a largely chronological account of his life in the 20th century from the 1930s to the 1990s. Starting out with humble beginnings in Rameswaram, a small town in southern India, Dr Kalam takes the reader through many of the key highs and lows of his life. Recounting his past, he talks about his brother-in-law and his first cousin who helped him earn his first wages, and the lessons of honesty and self discipline that he learned from his father. He talks about his studies at Madras Institute of Technology whilst naming his teachers and professors, who influenced his thinking the most. It was fascinating to see him vividly recall specific learnings and quotes from decades in the past! Some of my favorites were - “To succeed in life, you need to master - Desire, Belief and Expectation” and “Adversities always present opportunities for introspection”.

A description of an interview with the Indian National Committee for Space Research (INCOSPAR) in the 1960s was most interesting. He was interviewed by Dr Vikram Sarabhai - the Father of the Indian Space Program, and became one of the first rocket engineers at INCOSPAR, that later became the Indian Space Research Organization (ISRO). He briefly mentions his trip to the USA for training with NASA, and his work at Langley and the Goddard Space Flight Center. He reminisces some of his interactions, and at the same time shares his perspectives on other well known peers in the field like Satish Dhavan, Bhram Prakash, V.S. Arunachalam and Vikram Sarabhai. This gives the reader an especially compelling insider’s perspective into some of his key contributions, including the Satellite Launch Vehicle (SLV-3) launches in 1979 and 1980.

The book concludes with his thoughts on some of the societal issues that still thwart the exponential growth poised for India. He expresses his view that the biggest problem in Indian youth, was a lack in clarity of vision, or lack of direction. He re-iterates the idea that suffering is the essence of success, and the fact that God had never promised pleasure without pain. It was a nice short autobiography especially for someone like me who is generally interested in space technology. A little familiarity with India’s defense organizations and key people in the 1960s-1980s would help, although not necessary.

I’d like to add on some of his most influential quotes from the two times I got the splendid opportunity to meet him in person during my younger days through initiatives in high school and university. Further, my grandfather, who was a fellow scientist at Defense Metallurgical Research Laboratory (DMRL - DRDO), was a big influence in my ways of thinking and I still think back to his adulations of Dr Kalam during our conversations!

“One should never worry about ones future prospects, instead it is more important to lay sound foundations, enthusiasm and a strong passion for their field of study”

“To succeed in your mission, you must have a single-minded devotion to your goal”

I have read the book and seems like many parts of the book are omitted in the audiobook, making the entire experience very shallow. The original book is as great as that of the man Dr. APJ Abdul Kalam.
The musical pieces in between are unwanted (although are beautiful on a standalone basis) and disturb the continuity.
It would have been a delightful experience to hear the message from Dr Kalam without any filters.

I had read this book a few years ago. The audio version has been done beautifully.
The story is Inspiring and Touching at the same time.
Even listening to just a small part in the morning will make you smile.
The words are powerful and the music has added a lot of effect to this book.

My salute the flag, it makes me proud, I am an Indian it says out loud. 💐

Short and sweet story of how Shree Abdul Kalam blossomed into a great scientist, prisident, teacher and inspiration for generations of young Indians

The music was a bad idea

The music breaks up the story and if you don't understand the language, adds no value to the story. The story overall was a shallow. You don't get a very good idea of who he was, just that he was an engineer and worked in India's space program.

I truly respect Dr. Abdul Kalam. I liked the short content of the book but I did not like songs every 10-15 minutes. It was so disturbing. Little music is fine but why to have 2-3 minutes long songs in between. Those songs were beautiful but I wouldn't listen songs while reading book.

wished the book shared more specifics on the situations faced and how challenges were overcome. Some parts were a bit high level. But regardless, a good perspective of a patriot to his country/ people.

This book was quick n engaging but didnt need so many songs. Otherwise nice book.