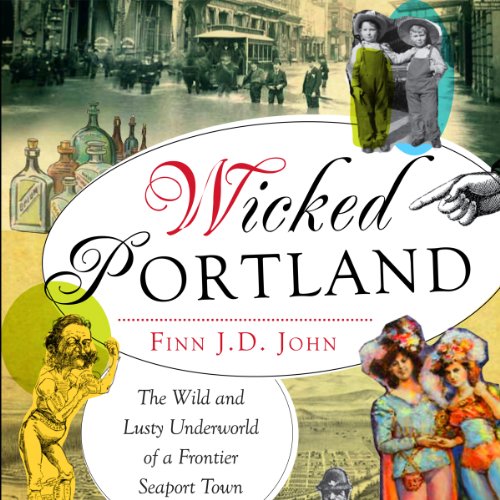 In its youth, Portland, Oregon, was a bit like a rough-and-ready logging camp with a gritty, hard-punching deep-water port. Lusty lads dallied with hard-eyed beauties in dark alleys, and captains forked over “blood money” to buy men for their crews from shanghai operators. From the seedy waterfront to the notorious North End, Portland's sin sector offered vices packaged in pint glasses and perfumed corsets. Establishments like Nancy Boggs's floating bordello and city police chief James Lappeus's Oro Fino Saloon beckoned to the city's wastrels and grifters, votes could be bought for the price of a pint and opium flowed freely into the city with the help of friendly port officials. Join Finn J.D. John of the “Offbeat Oregon” column as he reveals the roughest, most colorful era of Portland history, when the Rose City developed an international reputation for violence and lawlessness.

The narrator, and author, is a polished performer and solid researcher. Altogether enjoyable, would immediately recommend it to anyone interested in entertaining history in general or Portland in specific.

I moved 20 mi north of Portland 7 years ago. I relish any opportunity to laugh at this self important micro-"city." For some reason, I cried at one point....Borne.

This book, like the others by Finn JD John is a great work. It's content is beneficially to every Portlander and PNW historian alike.

Good if you are really into NW history

It's a nice, short and pretty well written book that focuses on the underground activities of late 19th century Portland. Ideal for people who love NW history, maybe not well suited to the general audience. The narrator was vivid but bordered on cheesy multiple times.