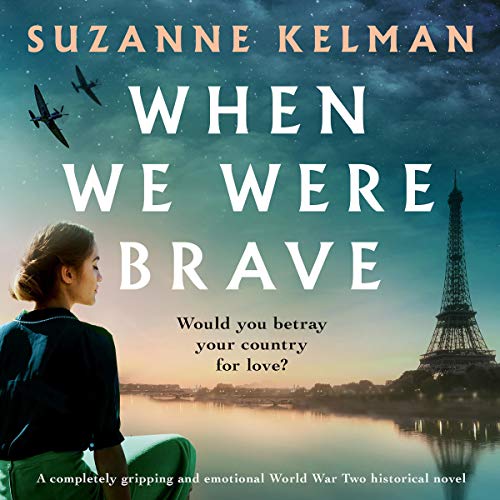 The face of the woman in the photograph was tilted upwards, as if enjoying the sunshine just for a moment, even as the wreckage of the bombed-out street lay behind her...

Cornwall, 1944: Blinded by love, Vivienne Hamilton eloped to Paris with a Nazi prisoner-of-war, never to be seen again. A disgrace to her family, her name would not be mentioned by any of her relatives for over 75 years.

Present day, London: When Sophie discovers a photograph of her great aunt Vivi from World War II, it throws her into a world of confusion. Because, as she learns about this secret relative, she quickly realizes that the photograph doesn’t fit with her family’s story. It shows Vivi leaving an address associated with a spy network in London - a place she had no reason to be - and it is dated right before she disappeared.

Meanwhile Sophie’s own life feels as blasted and bombed as the blitzed city in the photograph she’s looking at. Her beautiful daughter - as full of joy and wild energy as Vivi had apparently once been - is gone; and Sophie’s heart has been left broken into pieces.

Retreating to the family home in rural Cornwall to seek solace from her pain and the feelings of guilt that she could have done more to protect her daughter, Sophie finds herself becoming obsessed with Vivi’s life.

But nothing can prepare Sophie for what she is about to uncover - the story of a woman who risked everything for the person she loved the most; and a secret family history that could be the key to Sophie’s own future.

A powerful, haunting and unforgettable audiobook about love, heartbreak and betrayal set in World War II Britain and France. Perfect for fans of The Nightingale, Under a Scarlet Sky, and My Name is Eva.

"A heart-wrenching story of ordinary people elevated to the realm of heroes through love and sacrifice...It is an emotional journey of heartache and love that will leave you in tears. One of the finest books I have ever read." (NetGalley reviewer, 5 stars)

"Oh my goodness! Evocatively unsettling yet hauntingly beautiful...the story is incredibly powerful...I read this book with bated breath. I cried, I grieved and I hoped...I was left both heartbroken and satisfied. Suzanne Kelman...has floored me with this book." (Robin Loves Reading, 5 stars)

"A captivating story of love, friendships and hope for the future. It’s written with such depth that the characters and settings come alive before your eyes." (Chells and Books, 5 stars)

"Heartbreaking...Make sure to have your box of tissues at the ready while you read this beautifully told story!" (Goodreads reviewer, 5 stars)

One of THE best ww11 spy novels with 4 main characters

This book grieved me so much and I dare anybody NOT to cry in chapter 25. I never lost interest and it showed what we deem ordinary people taking all types of dangerous chances to live free. Little known resistance groups Regular citizens. It is a great love story on two fronts. But I won’t say more. You will not be disappointed. I already listened to her debut novels. So so good. Please write more of this genre. Most favorite subject

I bought this book because of my interest in WW2 and the high praise from listeners. This turned out to be one of the most disappointing purchases I have made on Audible. The storyline is not the problem: two time frames connected by two women who are related. One is the aunt who is viewed as a traitor to her country and the other is the niece looking for redemption for her aunt. The writng actually detracts from what could have been a compelling story. Our heroine is a ninny who never "says" words she "states" them. Her lover, a high ranking Nazi with a good heart escapes with her back to Germany in an inplausible and very quick process. Hello I am wounded and french. No, I am wounded and German. Will you escape with me and turn your back on your country and family. Yes, I have decided I am in love lets go. Basically that is the trajectory. Next we are asked to believe that although this very suspicious couple is living together no one from the Gestapo has done a background check on her or realizes that this "secretary" is actually living with her boss. In the meantime the nieces's story is just as implausible. She happens to meet, fall in love with, and pursue her aunts story with--the nephew,grandson (I forget because it doesnt really matter) of the Nazi. Really? Next, the narrator: every word is given the same weight. Everything heavy with emotion: She ate a croissant. He placed her on the bed. (like a book on a shelf).
How this got so many likes is a mystery.

I was drawn to listen to this book because I had listened to “A View Across the Rooftops” by this author. I loved that one so much I decided to give this author another try. I was not disappointed. The narration is impeccable! Alison Campbell is my favourite narrator. As I said in the title of this review, this story is exciting, passionate and heartbreaking all at the same time. I cried at the end listening to the passion portrayed by the narrator to help me feel what the characters were feeling. A satisfying listen.

I enjoyed listening to this book, but I felt the story was a bit contrived.

struggled to finish. Story was trite and shallow.

not in the league of The nightingale or Beneath Scarlett Sky to which it was compared to in the previews.

Loved this book so much and the narrator was wonderful! I hope this author continues to write more!

Loved this take on who the brave men and women of the French Resistance were, as well as the the English SOE operatives who assisted them.
Interesting way of connecting a contemporary women's search for courage with her great aunt who was an SOE operative during WWII. Not to mention 2 great love stories.
I love WWII historical fiction. One of the reasons I read it is to remind myself that bravery in the face of oppression and evil is often required of ordinary people - and I believe now is such a time in our country.

This story had me waiting for more from the very start. Heart wrenching, beautiful story. loved it.

This book is very well written and captivating. The back and forth in time was not a distraction and there was enough mystery to it about who the principal characters really were.
A very good read and listen to.

Good, but not that good

I did enjoy this book and it had all of the parts to be a really good book, but it just was okay. I don’t regret listening to it and I did get interested in it, but it wasn’t a book I would listen to a second time.

Extremely enjoyable
Càptured the listeners imagination and held it to the end. Character accents were delivered with clarity and imagination.

Tried very hard to get into this book. I really didn’t like the style of writing , there was no real substance to the story. The narration was monotone and to be honest annoying. I had to give up .

This was a very moving story of love and war and sacrifice.We must never forget what so many did for our peace today.A well written and read book.Very emotional at the end.

A good story story could have been true , a good read I enjoyed it

Nicely written and well read but the story isn't very credible and it goes on a bit. It's more of a love story/romance than a ww2 spy story.
Easy to listen to, though.

Couldn't put it down

From start to finish, so emotional, gripping, couldn't put it down. For those who she not be forgotten

A great mix of Well researched detail and an interesting mix of characters. Clever mix of spy networks with the sacrifices of the resistance operators and deeply embedded brave men and woman who risked their lives to beat a dreadful movement. The horrors of war must never be forgotten.

Totally invested in the characters and binged in 2 days. Loved this story, managed to build real pictures and gripped all the way through. Would recommend as one of my favourites this year.

The story is set in two timescales, present day and 1943/44. It is very well written and the narrator is amazing.

Loved this book, didn’t want it to end. Can’t wait to read another book by this author

Couldn’t put it down

I absolutely loved this book ,very well written and beautifully narrated ...one of the best books I have read in a long time ..will;ow search for more of her books.

This is a sad but lovely story and so well narrated by Alison Campbell with impeccable references to war time.

I was captivated by this book and it was beautifully narrated by Alison Campbell.
Highly recommended.

loved it! the characters are really brought to life and it makes you imagine the difficulties people faced in that time period

I have long been interested in WW2, not just it's causes, campaigns and battles but the many stories, told and untold, of courage, sacrifice and suffering that this terrible conflict produced. I found this book, as with A View Across The Rooftops, to be at once engaging, interesting, revealing and ultimately an emotional insight into the remarkable bravery of individuals who risked their lives for the fight against evil.

This was an enjoyable book by this author, loved the story line. it held you though the story. The narration was easy to listen to. A book worth listen to.