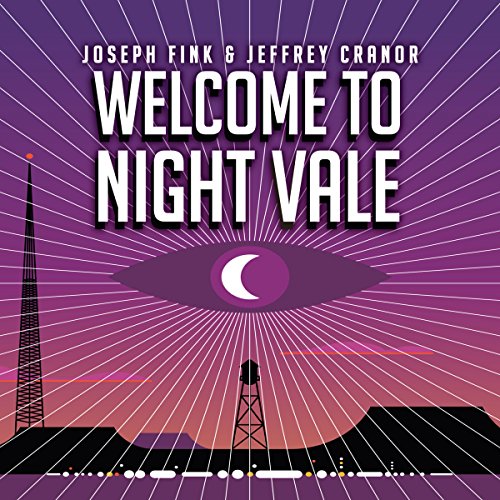 Night Vale is a small desert town where all the conspiracy theories you've ever heard are actually true. It is here that the lives of two women, with two mysteries, will converge.

Nineteen-year-old Night Vale pawn shop owner Jackie Fierro is given a paper marked 'KING CITY' by a mysterious man in a tan jacket. She can't seem to get the paper to leave her hand, and no one who meets this man can remember anything about him. Jackie is determined to uncover the mystery of King City before she herself unravels.

Diane Crayton's son, Josh, is moody and also a shape-shifter. And lately Diane's started to see her son's father everywhere she goes, looking the same as the day he left years earlier. Josh, looking different every time Diane sees him, shows a stronger and stronger interest in his estranged father, leading to a disaster Diane can see coming, even as she is helpless to prevent it.

Diane's search to reconnect with her son and Jackie's search for her former routine life collide as they find themselves coming back to two words: 'KING CITY'. It is King City that holds the key to both of their mysteries and their futures...if they can ever find it.

An excellent accompaniment to the podcast

This book is a perfect way to get more Nightvale when you have caught up with the podcast. m Cecil's voice is soothing to listen to and the story is exciting and surreal.

My understanding of the town grows deep, my love for the people also grows deep. I feel bad for the tarantula, but that is besides the point.

Being an avid listener of the podcast I was coming at the bit to hear this, however it was a let down. I think the combination of a relatively dull plot and the format in which it was presented just didn't capture the charm of Welcome to Nightvale. I thought having the narration done by Cecil Baldwin would be the icing on the cake, but having him read as an outsider to the story, rather than as a key character, just made this Nightvale feel even more disconnected from the podcast. Still worth a listen, but don't get your hopes up about the quality

For the fans really

If you already love Nightvale then you will love this as a hugely extended episode. If you don't already love Nightvale then you will be confused and possibly angry. It's very, very surreal and does assume your previous knowledge and acceptance of, for instance, faceless old women who secretly live in your home, dog parks, sentient houses, and angels (who don't exist).

It's funny and weird and charming and disturbing as ever. If you're not already fully immersed in the world of Nightvale I would suggest you go and listen to a few of the podcasts and, if you like them, listen to all of them and then listen to this. If you dislike the first episode of Nightvale, then stop listening imediately and do not buy this book.

To be honest, the plot of the story is almost irrelevant to the world building and atmosphere so it loses a star from me.

Cecil Baldwin is obviously brilliant and no one else would be an acceptable narrator.

Oh, and Steve Carlsberg isn't such a bad guy, whatever Cecil says.

Good, but slow at times.

A good story if you're into Night Vale as a show, but it does take quite a while to get going. Once it found a decent pace I was hooked.

i have relistened to a lot of parts, because this was my go to sleep guide. Cecil's voice is amazingly soothing. The story was much more than I thought, and exactly what i dreamed it to be. TL;DR Mandatory for thoso who listen to the podcast

Welcome to Nightvale the book

If you love the podcast, you'll love this. I will say that it is not the best place to get started with nightvale but it does try to get newcomers up to speed.

Perfect and creepy and weird as always. Brilliant writting and beautifully read. Recommend for everyone.

I‘m a big fan of the X Files and Twin Peaks, so this was right up my street. The Narration is brilliant, the story weird and amusing at the same time. Highly recommended!

loved it, being familiar with nightmare help, though I hated the additional voice acting for Old lady jose and Carlos they were awful and not atall the right choice

I'm a fan of the podcast and the novel is just as amazing! A wonderful story, brilliantly narrated, with funny, relatable and truly unusual moments.

Usually audio-books do not connect for me but I think for Welcome to Night Vale choosing to listen to the audio-book was actually the better idea.

This is a story for fans of the podcast. Without an understanding of Night Vale and it’s wonderful quirks and who Cecil is the reader is going to struggle.

I did begin by reading the book but switched over to the audio-book after a couple of chapters. This made the whole experience so much better. It became an extended podcast adventure with two Night Vale residence at the helm. Having Cecil narrate the book is of course what makes it- because it reinforces the podcast feeling.

The story in-itself is true Night Vale. The is an accepted confusing throughout each tale, such as the concept of time and how Jackie is always 19. How Diane’s son Josh is who is, regardless how he represents who he is. I enjoy how Night Vale accepts all of this. How things connect in their own ways at some point in the story and how THE LIBRARY must always be feared.

I am not sure that if I read instead of listened I would have enjoyed this story the same way.

The strange wold of night vale

my new favourite book, combines fantasy, comedy and perfect anecdotes. The writing style is so unique and beautiful I haven't read anything like this at all

This book is for fans, in short. If you love the podcast and want to enjoy a far longer experience, or really if you just want to understand the lights seen in the sky above Arby's and the Man in the Tan Jacket, this is for you. Please note though, this book takes place between episodes 75 and 76 of the podcast, and consequently features spoilers for everything before episode 75.

I cannot recommend it enough, and if you have yet to listen to the podcast, I highly recommend you give it a go.

Cecil Baldwin continues to be an incredible actor, and the cameos from Dylan Marren (Carlos) and Retta (Old Woman Josie) as well as the *ahem* DEFINITELY NOT ANGELS were welcome and happy appearences.

I cannot wait for the next Night Vale novel, as well as the next episode of the podcast.

This book was different to the podcasts since it's a real, full story all in one so it had the lulls in action and plot that the podcasts don't. The story was also a little disjointed sometimes but overall I loved it very much and it was so wonderful to listen to the book the same way we listen to the podcasts. Diane and Jackie were awesome main characters and Cecil's shows in between the story was such a nice surprise!

I could tell you that this book was the most interesting, fun, and different book I have ever, ever, ever come across ever, but I won't because it is illegal, in fact it is illegal for me to say anything about it. It also mentions angels, though let's pretend you did not know that since it is illegal to talk of angels also.
So in conclusion you could say I may or may not have thoroughly enjoyed this book. I did. but go check with a scientist who will hook me up to a machine, write something on his clipboard then indicate the answer to you using actual words.

I loved this book. The storytelling was intriguing. Well read and engaging. Akin to the writing of Douglas Adams and just as gripping. A must if you love random, disjointed but also linear narratives.

Amazing book that I couldn't stop reading!! The story had me in a trance and I can't recommend it enough to people who love the podcast or love a good surreal and touching story.

Don't listen to the bad reviews!!

This was a remarkable book, filled with the trademark night Vale weirdness. It has a great story and amazing characters. Thank you Joseph and Geoffrey!!!!

Incredible story telling. Welcome to Night Vale: A Novel brings the Night Vale universe to life like never before, whilst retaining the weird and wonderful story-telling we are so accustomed to!

Cecil Baldwin makes this novel an unforgettable experience with his beautiful, one of a kind voice.

Loved it!
Brilliant touch by having Cecil narrarait it and accompanyed with sound effect and music 10/10. Why read the book when you could listen to this instead.

Everything we love about Nightvale.

If you’re a fan of the WtNV podcast then this will be everything you could hope for and more from a Nightvale novel. Compelling characters, references abound and an emotional plot and message make this novel a must for any NV fan. It is all the good stuff from NV but in over a dozen hours.

The one thing I will mention however, is that if you are not acquainted with Nightvale then this is likely not worth the read. As amazing as it is, it has a very specific audience.