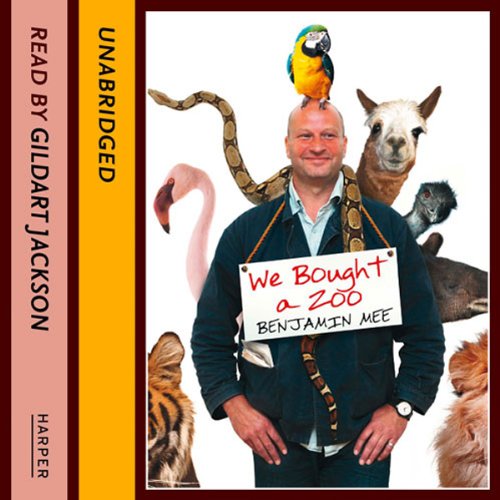 "Mee writes most movingly about his wife’s fatal illness, his children coming to terms with this, his sprightly old mum, and, of course, his 200 wild animals in all their diverse glory." ( Daily Mail)
" We Bought a Zoo by Mee is a genuinely heartwarming true story of triumph over devastating events." ( The Belfast Telegraph)
"An engaging tale from someone who dared to do something different.” ( Shortlist)

A film tie-in edition to 20th Century Fox’s film adaptation of the heartwarming international best seller starring Scarlett Johansson and Matt Damon and directed by Oscar-winning director Cameron Crowe. An amazing true story that has inspired the major Hollywood motion picture this Christmas, to be repackaged for release alongside the film.

We Bought a Zoo is about one young family, a broken down zoo, and the wild animals that changed their lives forever. When Ben [played by Damon] and his wife Katherine [played by Johansson] sold their small flat in Primrose Hill, upped sticks with their children, and invested their savings into a dilapidated zoo on the edge of Dartmoor, they were prepared for a challenge and a momentous change in all their lives. With over 200 exotic animals to care for - including an African lion, a wolf pack, a Brazilian tapir, and a jaguar - Ben’s hands, and those of his wife, children, and tiny team of keepers, were full.

What they weren’t prepared for was Katherine’s devastating second brain cancer diagnosis. Ben found himself juggling the daunting responsibilities of managing the park’s staff and finances, while holding the bailiffs at bay and caring for his wife.

A moving and entertaining story of courage and a family’s attempts to rebuild a zoo, and carry on after Katherine’s tragic death.

Good story, pity about the reader.

I enjoyed the book, but, found that the delivery of the narrator (who had meticulous diction) sometimes was without expression. Some of the sad parts of the story were read in the same tone as some funny incidents. Only occasionally was there a glimmer of humour. Sorry but it spoilt the enjoyment of the book.

My son and I really enjoyed listening to this story, mainly on our special trip to and from a safari park.

Such a wonderful story of the epic highs and the heart breaking lows. A wonderful underdog story of the man who everyone telling him he couldn't do it but he did. I loved the film of the same name but apart from a few similarities it is a completely different story. Which although that story was so well told it's a shame it couldn't have been the actual story as it is equally if not more exciting. Very disappointed to have finished listening to this would have been happy if it had gone on a lot longer. Felt a bit of sadness as I saw "11 minutes left"

If you could sum up We Bought a Zoo in three words, what would they be?

The heroes win against all the odds in a true life story.

What does Gildart Jackson bring to the story that you wouldn’t experience if you had only read the book?

I was touched by the obvious regard the author has for the animals.

Good book. Liked the film too but this is the proper Brit version.

An excellent book which I found myself laughing like I haven't for a long time!

I absolutely loved this book and would recommend it to anyone. It kept me gripped all the way though! I think I need a trip to Dartmoor Zoo! (Just a shame I live in Yorkshire and its a bit far for a day trip!)

I really enjoyed this read. it is about a couple when tragedy hits them and the family decide to buy a wild animal park with absolutely no experience previously. it is all about this adventure between family, park, staff and animals. if you have seen the film forget it. This is based up a true story in England.