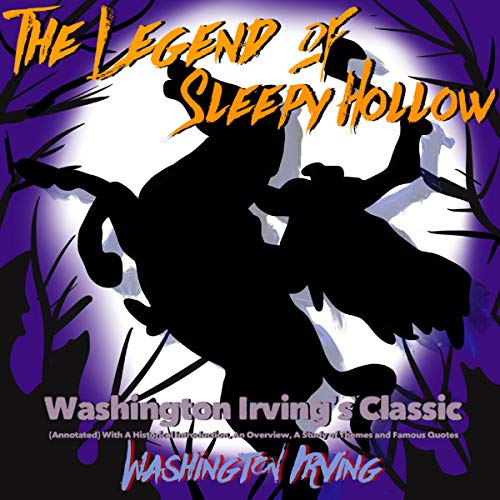 Unique to this title is:

You may, of course, skip all of it and go straight to the main title if you do not want any spoilers and come back later to the beginning.

Washington Irving was an 18th century American short story writer, historian, and diplomat. He was born into a merchant family of Scottish/English descent and was the youngest of 11 children.

Irving was one of the first American writers to become popular in Europe. He was admired by some of the best-known British writers, including Charles Dickens, Lord Byron, and Walter Scott.

Irving's writing career started in 1802, at the age of 19. He started sending letters to the Morning Chronicle, writing about the city's social and theater scene. which were written under the pseudonym Jonathan Oldstyle. This was one of many pseudonyms he used throughout his career. He moved to England for the family business, and this is where his most famous stories were written.

Irving continued to write throughout his life and completed a five-volume biography of George Washington just eight months before his death at age 76.

The Legend of Sleepy Hollow takes place in 1790 near the Dutch settlement of Tarrytown, New York. One of the locations in this area, known as the Sleepy Hollow, is known locally for its ghosts. There are many legends about this place. According to one of them, the town was bewitched during the early days of the Dutch settlement and according to another, it was an old Native American chief who put a curse on the place.

The most fascinating of the many legends surrounding this place was the story of the Headless Horseman. Locals believed it to be the ghost of a Hessian trooper whose head was shot off by a cannonball during the American Revolution. The legend has it that he rides around at night in search for his head.

I Grew Up Watching and Loving...

I grew up watching and loving Disney’s animated version of the story. It’s surprising to hear the overview that paints the characters differently than the cartoon but Disney does have a way of altering one’s perspective. Still an enjoyable story even if it’s different from the cartoon.

The Legend of Sleepy Hollow is a horror classic that takes place in 1790 near the Dutch settlement of Tarrytown, New York. This short story tells the tale of the Headless Horseman and Ichabod Crane.

To start with, I liked the narrator. Unfortunately, the actual story fell a little short. It was just ok. I was expecting more, especially because I love Tim Burton’s Sleepy Hollow movie. The story was very heavy on the descriptions of everything and in the end, not very dark. But overall, still an ok story to spend an hour listening to.

One of my issues with this audiobook, which did not affect the rating, was that it starts by giving you an overview of this legend and discusses the themes of the story. Usually, this would be fine. But it basically gives away the whole story before you actually listened to it. I suggest, if you get this copy of the audiobook, start with the story first, then go back and listen to the discussion parts. But like I said, this didn’t affect my rating. My rating is only for the story and narration.

*Audiobook provided for free for an honest review by Audiobook Boom.*

This is the fourteenth book I’ve received from Audiobook Giveaways. This is the first time I have read or listen to this book. I enjoyed the historical introduction and other information they put at the beginning of this book. I think that was a nice addition to this rendition of the story. It helps make it unique. I can’t say I was impressed by the actual story however.

This is the second book I’ve listened to by this narrator ( Mike Carbuccia ). His narration is OK. It is obvious I am being read to. There are times where his emphasis and cadence of his narration was awkward. His pacing is a bit quick in areas so the words/sentences run together, then slows down in other areas.

There are no explicit sex scenes, excessive violence or swearing.

I was given this free review copy audiobook at my request and voluntarily left this unbiased review.
Please feel free to comment on whether you found my review helpful.

This is a good classic and a very quick listen! The narration was great. I have read all of the classics and enjoy them in audiobooks. I was given this free review copy audiobook at my request and have voluntarily left this review.

Love the historical content and how it proves more understanding of the story. The time period when it was written and of Washington Irving
Great narrator and a fantastic way to be reacquainted with the Lesgend of Sleepy Hollow
I received a free audiobook for an honest and voluntary review.