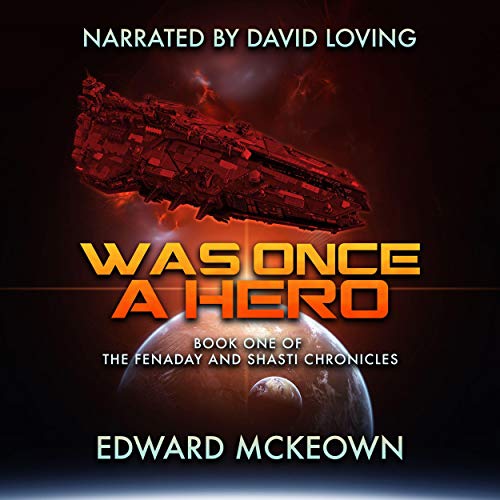 Reluctant privateer Robert Fenaday searches the stars for his lost love, Lisa, a naval intelligence officer whose ship disappeared near the end of the Conchirri War. He's joined by the genetically engineered assassin, Shasti Rainhell, whose cold perfection masks her dark past. Both are blackmailed by government spymaster, Mandela, into a suicidal mission to the doomed planet Enshar. Leading a team of scientists and soldiers, they must unravel the mystery of that planet's death before an ancient force reaches out to claim their lives.

Takes a bit to get the story rolling, but once in a good book. Worth a credit. I look forward to seeing where the author takes the series.


This book was provided at no cost for a fair and honest review.

Robert Fenaday is in the constant search for his wife Lisa, whose spaceship was lost during the Conchirri War. Not wanting to give up he is making money now as a privateer and at the same time, still looking for her. Blackmailed by the government, he is assigned a suicidal mission: going to the planet Enshar, and find out what was that killed the remaining population and anyone trying to approach the planet.

I found this novel quite entertaining and action packed. Robert and Shasti are quite a charismatic duo, and it is almost impossible not to fall for them. With a past in common and some dark secrets, these are the most interesting characters of the book.

There are many characters in this story, and most of them are not very developed, which made difficult at times the task of following everything. I don’t think most of them were even necessary, but I guess it is the way McKweon decided to use to show how dangerous this mission was, since many of them did not make it. Nevertheless, I think it would have worked better with less characters and more developed.

I found the mystery of the planet Enshar very intriguing, until the point where we almost know what they are up against. I found it a bit disappointing, and anticlimactic. There was something in its execution that did not completely click with me. It was a pity, since the story was quite promising.

My main issue was with the narration. I was not comfortable with David Loving’s narration and at times he seemed to run out of air. All characters sounded the same, and this is what threw me back the most, since there were many and at times it was difficult to know who was talking. I had to make an extra effort that did not really pay off.

I received a copy of this book in audio format from the narrator in exchange for an honest review.

Kept me on the edge of my seat

If you could sum up Was Once a Hero in three words, what would they be?

Toss up between Robert and Shasti, both are strong characters and I enjoy their character dynamic.

Loved this book. Great narrator and great story. Fantastic space adventure for fans of the genre. I received a free review copy of this audiobook at my request and I have voluntarily left this review.

This is definitely a sci fi book that qualifies as a space opera. Sprawling universe to immerse yourself in, interesting characters and lot of adventure. The narrator did an ok job on voices but most of his characters sounded the same. All in all, I really enjoyed this one and will look for more from this author.

Entertaining story. Pulled me along with nice pacing. I felt like the characters were well rounded, some of the aliens could've used more depth and difference from humans. My one big issue with this book was the narration.

A true gem for the Space Opera fan

Would you listen to Was Once a Hero again? Why?

Possibly. Its a good story and, and at some point it would be worth a relisten.

First, to get it out of the way "I was given this free review copy audiobook at my request and have voluntarily left this review".
This story is fine addition to the world of Space Opera.If you're a fan of Andre Norton, or any of the greats of old fasion space adventures,you will enjoy this one.In many ways this compares with the stories of the Solar Queen, or the stories by Murray Leinster.
It has a steady pace with few, if any,parts that fall short.
Edward McKeown is an author to keep an eye out for. If this is any indication of future stories,there will be,hopefully,many more well worth your time.

Here's how I rate

On narrator
5= good read speed, good pronunciation, appealing voice/voices.
4= an issue with one of the above
3= many issues
1-2 I couldn't finish because of his voice

Story
5= good plot, keeps my attention, it doesn't ramble along, good character development
The rest follows a similar to narrator


"This book was given to me for free at my request and I provided this voluntary review."

Is not each person a unique universe?

In the last days of the Cinchirri war, something happened on the home planet of one of the United allies and all intelligent life was destroyed along with the cities and outbreaks of fire everywhere. The cause was unknown. Five years later, the planets a forbidden area still, an earlier expedition to monitor and look for causes having been destroyed by invisible forces even before reaching the planetary surface. But now the handful of Inshari survivors, living as refuges, want to go home. And it has been agreed that one of their number be allowed to return to the planet to determine the cause of the dsaster, if possible.
Considered a suicide mission, a ship's crew is secretly recruited under the command of a space pirate blackmailed into the task. With the unknown ahead, the ship faces anger, fear and possible betrayal. But the money is good - very good.

This is a well written, clever classic science fiction story with strong characterisation, plot and action. It is also very atmospheric, reminiscent of, though different from, Forbidden Planet. The narration by David Loving enhances the text and there is never a dull moment even when the action quietens. A book to recommend to any science fiction fan

I received my complimentary copy of Was Once a Hero, from the rights holder, free of any obligations, via Audiobook Boom. Thank you. I enjoyed it immensely and will look out for other books in the same series.