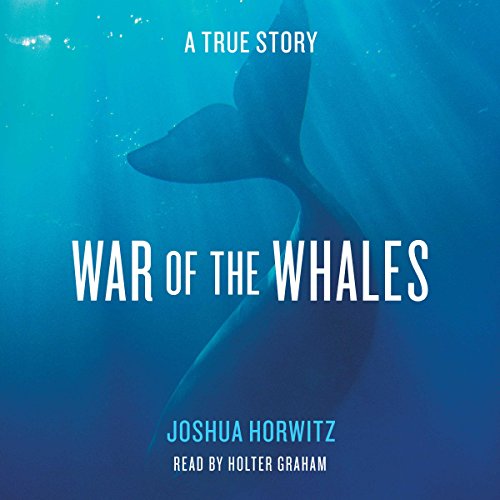 War of the Whales is the gripping tale of a crusading attorney who stumbles on one of the US Navy’s best-kept secrets: a submarine detection system that floods entire ocean basins with high-intensity sound - and drives whales onto beaches. As Joel Reynolds launches a legal fight to expose and challenge the Navy program, marine biologist Ken Balcomb witnesses a mysterious mass stranding of whales near his research station in the Bahamas. Investigating this calamity, Balcomb is forced to choose between his conscience and an oath of secrecy he swore to the Navy in his youth.

When Balcomb and Reynolds team up to expose the truth behind an epidemic of mass strandings, the stage is set for an epic battle that pits admirals against activists, rogue submarines against weaponized dolphins, and national security against the need to safeguard the ocean environment. Waged in secret military labs and the nation’s highest court, War of the Whales is a real-life thriller that combines the best of legal drama, natural history, and military intrigue.

Where does War of the Whales rank among all the audiobooks you’ve listened to so far?

This is the most informative audio book I've ever listened to. While it's a great dramatic story and and an interesting read, it also provides a wealth of information about whales, how they are being endangered by both commercial and military underwater sonar technologies, and the dedicated whale researchers and environmental activists that are working hard to save them. It is both fascinating and heart-breaking.

What does Holter Graham bring to the story that you wouldn’t experience if you just read the book?

Holter's style brings to life all the drama, mystery,sadness and wonderment that this story contains.

That whales are being endangered and killed by human-produced sonar systems, that this has been going on for several decades, and how the Navy and even the Supreme Court has turned a blind eye to their plight.

While this book is a true story and very informative, it's a great page-turner and reads more like a dramatic fiction.

Important science and a whales narrative

This was a difficult book to listen to mostly due to the many numerous descriptions of dead an or dying whales and or Dolphins....hard to hear but worthy of listening to and probably one of the most important books about science taking on that of well a really childish and unnecessary Navy. Also, if this US Navy is so great then how is it that they nor other countries have not developed something greater than sounds that kill nearly all life within it's wake...

I met Ken Balcomb many years ago and was very impressed with his knowledge and compassion for whales. But this book really shows what an amazing person he is wi th h a secret past in submarine tracking in the Navy. Despite his great effort and those of other heroes, the Navy continues to harm whales. The story is very well presented in this book.

Fantastic Writing in a Scientific Manner

I loved the way this book was written. Accessable without being simple. I felt the book read more like a novel rather that an historical account. The facts were well presented without getting monotonous. The backstories were intermixed in a way to keep the reader involved and personally I felt it helped the book keep a good pace. Without it the meat if the story would have speed by without a chance for the reader to get involved. 5/5 read and put Laguna San Ignacio on my bucket list.

The details are important

There is always a trade-off when we add technology to the solution. Rarely is it all good. This book discusses the trade-off of using sonar technology for naval defense and the damage it causes whales. It discusses the cost to the eco-system when we focus solely on the technical solution. It is a good listen, can get somewhat dry in parts, but then you will be going back for the details. &quot;Audible 20 Review Sweepstakes entry&quot;

An interesting look at both the science and politics of this story. The description of the whales' experience was heartwrenching.

The rest of the story

Very fact based, event chronology. Must reading for scientists of all disciplines. I recommend highly! If we lose these creatures, we can't just "buy more"

Would you consider the audio edition of War of the Whales to be better than the print version?

This is not a 5 star for just this reason; the book jumps through many different time frames to tell anecdotes and give background, all of which are useful and appropriate, but which are harder to pull off in an audio format.

Legal drama, like it really is. Its all about risk, shades of grey and hard work.

Having worked in antisubmarine warfare for the Navy, I was especially interested in this book. Except the part about Naval testing off Cape Hatteras, Delaware. I live in Delaware and it's Cape Henlopen, Delaware. I don't know what is in the printed book but I have to question what exactly is the job description of editors these days?

So boring I couldn't finish

This "story" never took off. The extreme detail and lack of any character development made it a chore to listen. I was interested in whales. I like science. This story just didn't have any characters that I could relate to or find any human interest in their adventure.

I enjoy a wide range of books.

The narrator did a good job with boring material.

What character would you cut from War of the Whales?

The characters were not interesting in the least