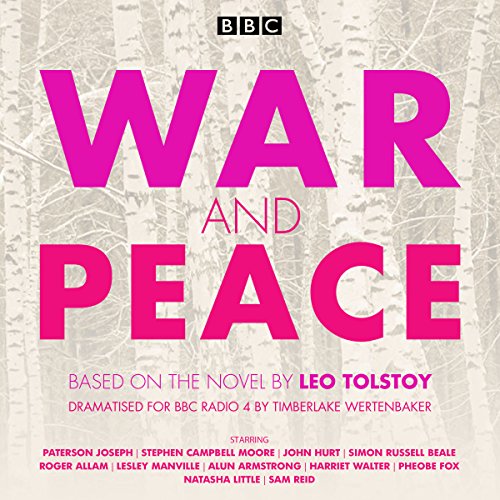 "Tolstoy's imagined world is recreated on air brilliantly by the extraordinary cast." ( The Spectator)

I tried to read War and Peace a few times but never stayed with it until this performance. The description of war were amazing- you really felt that you were on the battlefield.
I highly recommend.

Though War and Peace can be a daunting book, this BBC radio adaptation made it very enjoyable and the time (10 hours) passed quickly. I would definitely recommend it. Wonderful actors. Music and sound effects brought the story to life.

Well preformed. I appreciate the actors clear articulation and command of the material. A joy to listen to.

Only took two days to finish this book. Loved the story and performance. Wonderful version.

Awesome dramatization of War and Peace!

This is a terrific work by BBC Radio 4! Superb!
The story in itself is one that keeps the listener hooked and reveals the greatness of Leo Tolstoy, but the dramatization adds a theatrical element that enhances the whole experience. One really feels that is in the trenches fighting alongside the Russian troops.
I loved it!

Hearing a dramatization of this magnificent novel that I had read years ago brought the story to life. However, I had to get a list of the characters to refresh my memory when I started listening. One of the actors had an accent that sounded strongly Irish or Scottish. I found it ill-placed in this narrative and at times very distracting. He portrayed a minor character yet one who appeared enough through the story to cause me to give 4 stars instead of 5.

I loved it! I tried reading the book, but got lost in the characters. This was magnificent in telling the story and bring you in with great sound effects.

Best of the best

This epic novel brilliantly performed. Very touching and I was moved to tears many times.

Never found a dramatization on audible. I finnished

I really Liked Murder On the Orient Express so I thought I'd give the wonderful War And Peace a go Big disappointment O found the background noise very distracting. Also didn't know .who was.talking a lot of the time


Liked Murder On The Orient Express, I thought I'd give this great story a go. Very disappointed. I found the background noise distracting. I couldn't tell who was tal

An excellent production of War & Peace which we have listened to several times and look forward to more. Quite true to the book as it can possibly get, we have 9 hours and 38 mins of pure classic theatre that is beautifully acted by an all star cast who play their parts with aplomb. This is best if you can listen in one go, but still as enjoyable in parts. I could have listened to many more hours, this story just grips me each time. I like it because there are so many characters interwoven, some you like some you despise, but all have a personality behind them that stirkes, power and belief, friendship, love, desire, political intruigue, comradeship, and down right utter selfishness. Its all here set in a time and a Country I am thankfull I was not born.

A fantastic and thought-provoking story

A dramatic and encapsulating performance of each character's storylines and development, with thought-provoking questions and narratives throughout. Some shocks dashed here and there makes this a compelling listen.
However, due to the creative and immersive way the audio has been mixed and engineered, it is best enjoyed in a quiet space. Character dialogue can sometimes sound rather distant and quiet at first, so limit the noise around you so you can get lost in the characters' storytelling.

Very difficult to hear all the characters.

I had to return this book after one chapter. Some characters sound so distant you can barely hear what they are saying and it very frustrating, especially as I know that the acting and narration has been performed well. But it ruins the experience so had to return it.

A superb adaptation, gripping and moving in equal measure. Fine performances from the whole cast, which includes some of the greatest actors around.

A great way in to an absolute classic.

My favorite book of all time. This was a wonderful dramatisation covering the main parts of the story. I can't recommend this highly enough.

Superb dramatisation and a brilliant cast of narrators. It was a joy to listen to this performance.

This audiobook restored the original to me

I read War and Peace over 20 years ago. Even by the time I finished I could remember little - too many names, too many threads. I had scant overall sense of it then (despite loving much of Tolstoy's other writing) and practically none at all now.

This radio adaptation, however, is brilliant, bringing it all together, giving voices to the names, and the excellent actors giving character to those voices. At last it has come alive, and almost brought me to tears three times near the end.

With those voices and emotions still with me I now feel moved to return to the original again - in audiobook too - for the 55 hour plunge into Napoleonic Russia. That's a big turnaround.

I can't recommend this radio play / audiobook highly enough. Reading Tolstoy in translation is always going to be an adaptation of sorts; this one has taken that on fully, found a unifying point in the story and woven all the threads back to that moment, making sense of the whole and bringing the myriad characters to life. This is the BBC at its best.

The dramatization was brilliant!! I'm now going to take on the Herculean task of reading the book.

I am in awe of how Tolstoy expertly juggled the numerous characters against the backdrop of the French- Russian War.

Absolutely loved it, all 9+ hours of it!

I did enjoy War and Peace, though I didn’t love it

The story follows the fortunes of three Russian aristocratic families during the Napoleonic wars - though told with British noble accents. During family gatherings they reminisce and tell each other stories, some of war and some of peace.

A superb list of actors: Alun Armstrong, Sam Reid, John Hurt, Roger Allam, Tom Goodman-Hill……… the list is huge, and whilst this could be a positive I did find the enormous number of characters a little confusing - who was related to who, etc. Maybe a second listen would help make this clearer, or if you have already read the book you should be fine.

I did enjoy War and Peace, though I didn’t love it as much as either the Forsyte saga/ Cazalets dramatisations I’ve recently listed too. This is probably due to not really connecting with a character/s, there are just too many of them.