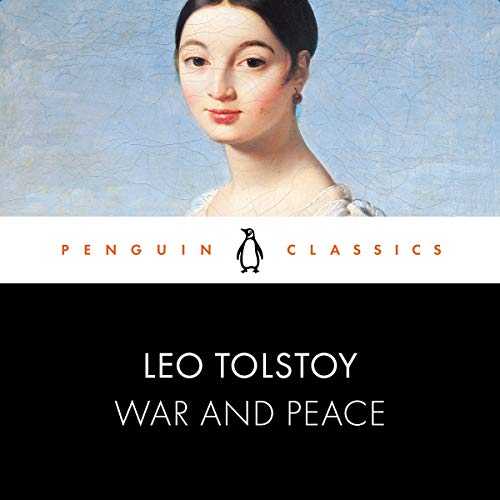 At a glittering society party in St Petersburg in 1805, conversations are dominated by the prospect of war. Terror swiftly engulfs the country as Napoleon's army marches on Russia and the lives of three young people are changed forever. The stories of quixotic Pierre, cynical Andrey and impetuous Natasha interweave with a huge cast, from aristocrats and peasants, to soldiers and Napoleon himself.

In War and Peace (1868-69), Tolstoy entwines grand themes - conflict and love, birth and death, free will and fate - with unforgettable scenes of 19th-century Russia, to create a magnificent epic of human life in all its imperfection and grandeur.

Great! but the editing...

In volume 3, the editing is very bad. the actor repeats lines many times, in different places.

Despite this, the story is amazing!

Different narrators somewhat ruin the experience, but most of them are good. In one part the editing is patchy and the narrator repeats the same sentences several times. Great story though <3

It's a soap opera really, a very good one. So many different stories aside from the main narrative. found the war bits sometimes a bit too much for my interest in military history, but happy to listen and pick up some insight along the way. Great philosophical ideas all through the book. Different narrators throughout made it sometimes tricky to get into again. One was not edited completely as lines were repeated when he felt it was wrong, but no one had edited out the first try. The last narrator, the epilogue was rather shouty, heart my ears, made the writting rather preachy and arrogant, maybe it was anyway, but the reader made it unlistenable.

Great book, shame on some narrators.

Great book. I'm glad I've finally manged to 'read' it. Some fantastic narrators and some really poor ones that make it hard to follow the story. I will definitely skip any more books read by her.

The change between narrators was very jarring.

The novel itself is a worthwhile listening experience. The long historical sections are interesting at first but then become quite repetitive.

Great book but some problems with the audio file

Really great and engaging book. Thought provoking.
the audio did have issues however, where it kept stopping despite being downloaded onto my device.

Though many people have said they don't like the narrators changing I found it a helpful change on a long book. They only problem was the lack of editing in the third book where sentences and parts were reread and therefore repeated just after it was first said.

The characters in this book are full of so much life. It's been great to follow this vast story from start to finish. To engage with the highs and lows. As each character's journey intertwines with one and other. A marvellous book. One I shall listen to many times.

War and Peace is one of my favourite books and I was looking forward to hearing Briggs’ translation, but the first narrator’s reading of dialogue is so stilted and irritating that I’m giving up before I’m even halfway through part one.

More of a rant than a social commentary

This book is an utter waste of time. I’m honestly not sure why I stuck with it and kept giving it chances to get better.

The account of the war against France is fairly well written, although Tolstoy lacks the skill of the likes of Simon Scarrow, Harry Sidebottom or James Jackson when it comes to the action of the battlefield.

The family saga aspects of the book are rather boring. In the lead up to the events of 1812, there does seem to be a point to them, which is more than you can say for those that take place after 1812. The plot completely falls away, and we are left with the various characters attempting to create some drama out of some intensely mundane events. There is reason why epilogues aren’t usually multiple chapters long. This is also where a lot of his ranting happens.

When Tolstoy said that War and Peace is not a novel, he wasn’t wrong. It’s part novel, part rant. Not only that, but it’s a rant by a man whose arrogance appears to have known no limits, and while he was clearly intelligent, his lack of any perception of the idea that his theories and prejudices might one day be proved wrong shows that he wasn’t half as intelligent as he evidently thought he was.

Tolstoy also mansplains. A lot. He has a an annoying habit of speaking the obvious and presenting it as if it is something amazingly insightful that he has discovered himself. The main example of this is his long, meandering explanation of the idea that in war, nobody is really in control, as if we couldn’t work that out for ourselves. For example, if commanders had full control over their soldiers and of the fate of their campaign, nobody would ever lose a war. The fact that someone usually looses, and that if they don’t, the war is a stalemate, and also that fact that even the winner will have suffered losses and setbacks along the way, proves to anyone that nobody is fully in control of any war. We don’t need Tolstoy to waffle through seemingly endless chapters to explain this fairly obvious fact to us.

The biographical account of Tolstoy’s life at the end of the book says ‘he required impeccable moral standards of all’. If only he had applied that to himself. He spends much of the book ranting about his opinions and betraying his prejudices. He is known to have had many vices, but no tolerance of the vices of others.

He talks as if everyone anyone who disagrees with him must be wrong, and that all people think certain things depending on their gender, social class or nationality. He also has this annoying habit of talking about ‘man’, rather than ‘humanity’, and he rejects science in favour of religion, although this is partially due to the primitive times in which Tolstoy lived.

The section that has been added to the end of the book also describes Natasha Rostov as the most beautifully written female character ever. This is a huge disservice to women, and also to any author who has ever written a female character. Natasha is weak and pathetic, and is described by one male character as having ‘no opinions of her own’. Perhaps this is how Tolstoy thought women should be? It would fit with all his other prejudices. Is this really a character worthy of being called the best female character ever written, given how many wonderful, empowered female leads their are out there? No. In fact, she’s got to be own of the worst written female characters I have ever read about. The most disappointing thing about this is that Tolstoy’s wife helped him a lot with the book. With so much time having passed, it’s hard to know whether she was a gender traitor or whether she feared her husband too much to challenge him on his highly judgemental and patronising portrayal of women, especially young women.

Another blot against Tolstoy’s character is revealed towards the end of the book. In the account of his life, it says that he rejected the royalties earned by his books, regarding them as ‘immoral’. Well, it’s easy to reject money when you know that you have easy access to it the moment you change your mind. As an established author, all he’d have to do would be to write another book, and he’d be rich again. Let’s be honest, given the number of books that have been published in the 110 years since Tolstoy’s death, authors then weren’t facing the the high levels of competition that modern authors face. The other side to this is that he intentionally caused his own family to suffer financially. Surely any parent can see how cruel and thoughtless that is? Being kind to strangers but cruel to his family seems to be a recurring theme in Tolstoy’s life.

I also sense that Tolstoy is jealous of Napoleon. He goes to great lengths to portray Napoleon as someone who lucked into his rise to power. Yet the fact remains that Napoleon rose from unremarkable beginnings to rule his country, whereas Tolstoy was born into great wealth, and made sure he was seen very publicly giving support to the poor, but did not achieve the status within Russia that Napoleon achieved within France.

The fact that all but one of Tolstoy’s surviving children were estranged from him by the end of his life days a lot about the sort of person he clearly was.

Do not waste your time with this book.

This audiobook is the only reason I finished

Anyone who manages to make this tome into an audiobook should be applauded, no matter what. Each of the 5 narrators is clear and consistent.

However, publishers should note that in volume 3 part 1 there are some editing mistakes - quite a few times in this section lines are repeated. It happens more than 10 times, sometimes a few within a single chapter.

Interesting, but not the greatest Novel written

I will probably be criticised as a Philistine but wouldn’t have through this without the audio version. The interminable love chapters, the anguishing and the twists and terms of emotions drove me crazy. The Epilogue explains much of what the novel- whatever you call it- is about is great. The production was ok, but why switch from male to female narrators escapes me. I did it, but I don’t think that I am a great fan of the 19th century Russian novelist. Give me A Suitable Boy any day if you want to read a magnum opus. Next I have Stalingrad by Vasily Grossman; am I up to it? Surely it can’t be as turgid as War and Peace?!!’ One positive outcome was the lowering of my estimation of Napoleon as a great leader or general. I never have understood why Churchill thought so highly of him.