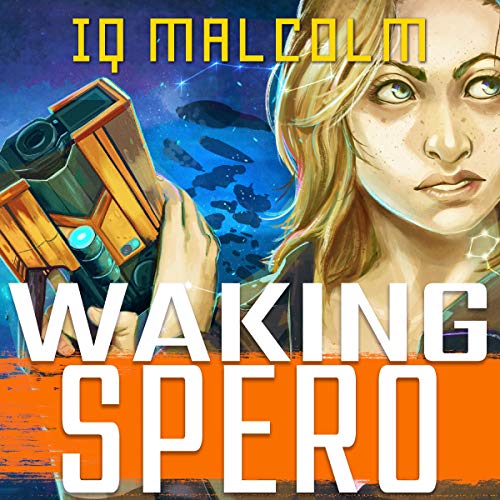 Crashed without a clue. Stranded on a strange world. Caught in the fight of their lives.

Aspiring teenaged artist Unai thought he was free from facing struggle like his father. But he’d rather be back in his family butcher shop when he wakes in a downed escape pod with a feral girl and cute-looking kid cadet on a faraway planet. And with carnage on the horizon and a gap in his memories, he’ll need more than his artistic instincts to stay alive.

2045 is the last year that Space Force Academy recruit Clover can remember. And though she’s desperate to honor her father’s military legacy by surviving the massive impact, she fears her two charges are casualties waiting to happen. So she goes with the only viable option: Take the lead to guarantee all three make it through the alien jungle’s deadly night...

Battling conflicting personalities and dodging close encounters with native creatures, Unai struggles to keep it together in the hostile environment. And Clover finds herself stretched to the limit keeping everybody alive when their search for answers unleashes an avalanche of peril.

Can they survive the savage lands before the extraterrestrial wildlife tears them apart?

Waking Spero is the engrossing first book in the Spero Trilogy YA science fiction series. If you like thrilling surprises, friendships forged under pressure, and otherworldly quests, then you’ll love IQ Malcolm’s fast-paced adventure.

Stranded on a strange world without a clue.

This is a rather interesting story, following three teenage kids, Unai, Clover and Elana, who were in a starship in cryo-pods travelling through space, when their ship has some sort of catastrophic accident, and they crash on a planet. They are ejected in a crash pod, there were ten in the ejection pod, but seven were killed on impact. It stars off al little slow and was hard for me to get into it but as it went on I found my self wanted to know more and where the story would lead, and looking forward to more books!

Unai & Clover..... way smarter than your average teenagers. Can’t wait to see where they go from here. Stranded on a planet they don’t know anything about. Destined to move forward and learn all they can. I keep imagining everything described and wishing I could be an explorer too.... except when there are giant spiders and bog worms!
Narration by Savannah Adkins was incredible. Loved loved loved this book!
I was given this free review copy audiobook at my request and have voluntarily left this review.

This book has a little bit of everything: thriller, romance, drama, action and so much more! I loved the whole thing.

What a book! Immaculate story and even better narration! The author did a phenomenal job in both orchestrating the book as well as choosing the appropriate narrator! I wish I could give it 10 stars!!! Definitely recommending it to my peers!

*I was gifted a free copy of this audiobook in exchange for an honest review.*

The good:
The author plunges into the action; he’s not afraid you’ll get lost without pages of backstory. I like an author who trusts his reader to keep up and doesn’t unnecessarily explain things. This stayed true throughout. He doesn’t explain jokes or asides: if you don’t get it you don’t get it. I think all the pop culture references will be a hit with younger readers. There is enough of a conclusion to feel like the time spent with these characters wasn't wasted, but enough of a question mark at the end of the book to draw you into keeping up with the series.

The not so good:
The audiobook narrator reads this more like a newscaster than a fiction reader, and it’s a bit distracting (also - just my pet peeve - there’s no “x” in “especially”).
Some of the dialogue here is a bit cringey, but I think the characters will resonate more with younger readers than middle-aged (me), and that is the intention after all. I just wasn’t able to suspend my disbelief enough to find any of the conversations believable in the circumstances the characters find themselves.

However, I give the book 4/5 stars because I feel like this is a fast-paced, easy, exciting read that young readers would really be drawn to. I have nephews in the 11-14 age range and I think they'd really enjoy this.