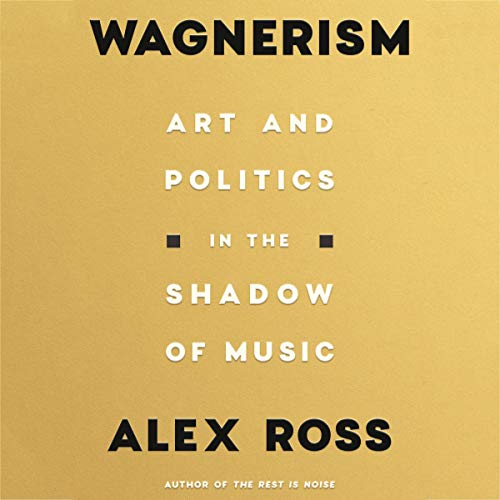 Barnes and Noble Best New Books of the Year, 2020

This program is read by the author and includes excerpts from Richard Wagner's musical compositions throughout.

Alex Ross, renowned New Yorker music critic and author of the international best seller and Pulitzer Prize finalist The Rest Is Noise, reveals how Richard Wagner became the proving ground for modern art and politics - an aesthetic war zone where the Western world wrestled with its capacity for beauty and violence.

For better or worse, Wagner is the most widely influential figure in the history of music. Around 1900, the phenomenon known as Wagnerism saturated European and American culture. Such colossal creations as The Ring of the Nibelung, Tristan und Isolde, and Parsifal were models of formal daring, mythmaking, erotic freedom, and mystical speculation. A mighty procession of artists, including Virginia Woolf, Thomas Mann, Paul Cézanne, Isadora Duncan, and Luis Buñuel, felt his impact. Anarchists, occultists, feminists, and gay-rights pioneers saw him as a kindred spirit. Then Adolf Hitler incorporated Wagner into the soundtrack of Nazi Germany, and the composer came to be defined by his ferocious antisemitism. For many, his name is now almost synonymous with artistic evil.

In Wagnerism, Alex Ross restores the magnificent confusion of what it means to be a Wagnerian. A pandemonium of geniuses, madmen, charlatans, and prophets do battle over Wagner’s many-sided legacy. As listeners of his brilliant articles for The New Yorker have come to expect, Ross ranges thrillingly across artistic disciplines, from the architecture of Louis Sullivan to the novels of Philip K. Dick, from the Zionist writings of Theodor Herzl to the civil-rights essays of W.E.B. Du Bois, from O Pioneers! to Apocalypse Now.

In many ways, Wagnerism tells a tragic tale. An artist who might have rivaled Shakespeare in universal reach is undone by an ideology of hate. Still, his shadow lingers over 21st century culture, his mythic motifs coursing through superhero films and fantasy fiction. Neither apologia nor condemnation, Wagnerism is a work of passionate discovery, urging us toward a more honest idea of how art acts in the world.

A Macmillan Audio production from Farrar, Straus and Giroux

Not Just for Wagner Experts!

As someone with a limited knowledge of Wagner, I was a bit hesitant to tackle such a massive work focused on his cultural and political legacy, but I found it truly fascinating. Ross's writing and narration are both top-notch, and the inclusion of brief relevant clips of Wagner's music is a benefit of buying the book in audio format. Highly recommended!

Wagnerism is a truly fantastic deep dive into the lasting impacts and cultural legacy of Wagner. The writing is compelling and propulsive, the insights fair and even-handed. If you care about art, you will learn something.

The narrative of how a pompous, racist composer...

The narrative of how a pompous, racist composer, in the finest detail, finally got the attention his overweening ego demanded by marshalling a coterie of influencers and rich benefactors.

Couldn't even get a fifth of the way through.

The author is extremely talented and his research is impeccable, but ultimately I just don't care.

If you are well versed in 19th and 20th century philosophy, history, literature, art, drama, film and music AND enjoy Wagner music dramas, then this is the book for you. There is so much offered here to justify the time spent reading or listening to the book. What if you are all the above except that you have had little exposure to Wagner's music dramas, then there is an easy fix. Audible has Robert Greenberg's "The Music of Richard Wagner" recorded for the Great Courses and this will bring you up to speed on the great composer, his life, thoughts AND music.

But what if you are like me, in that I have seen the Ring, Lohengren and Tristan and heard all but Parsifal but have no in depth exposure to the philosophers, historians, authors etc. that abound in this wonderful book. I guess I could use the book as a reference point and explore as much of the surrounding culture that I can. The problem is that I'm not sure that it is worth that commitment. There is some absolutely beautiful music written by Wagner but it is like a long road trip on an interstate highway. Most of the scenery just washes past you although you stop and marvel at the truly special moments. I love listening to Brahms and Mozart and haven't a clue as to what they thought of anything other than music. Wagner didn't create the story lines but worked with existing myths. He was a nut case in so many ways as well as a musical genius. But the bottom line is if you like the music and have the requisite cultural exposure, then you will truly enjoy this book. If you don't relate to the music, or are limited in your liberal education, then I'm not sure it is worth making the effort. I am still undecided.

Ross is surely one of the best writers on music in English working now. In this book he displays a staggering breadth of knowledge. I learned so much. Highlights were the chapters on Joyce and on Mann. What a gift he has shared with us all.

I always like hearing authors read their own work; it often reveals depths of emotion in certain moments that would go unremarked otherwise. Maybe this would have been an easier listen with another reader, but Ross will get nothing but praise from me for what he offers here.

Alex Rose knows a lot a Wagner, music and history. The book is a testament to that. Alas he’s not a good story teller. The book is crammed with details. Too many of them. But there is no sense narrative that leads you across all this plethora of information. The result is a book too tedious to finish.

An Astounding and Satisfying Read

The scope of Wagnerism, and this book, is astounding. Alex Ross deftly weaves copious, always relevant, references and anecdotes of the influence of Wagner and his oeuvre on all segments of culture, seemingly everywhere.
As someone with cursory knowledge of Wagner’s life and works, this was a deep dive in understanding how influential he has been in all aspects of the arts, humanities, and politics. Ross makes the connections seamlessly, and this remained a riveting “read” throughout.
The author does a fine job narrating the book: is straight forward, is able to handle the German and French pronunciations, and uses a touch of wryness when appropriate.