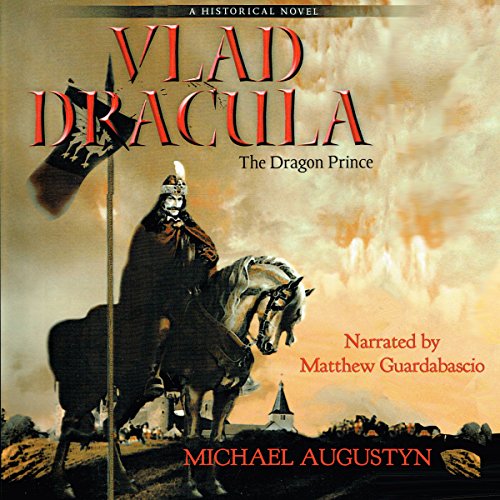 Most of the vast audience attracted to the subject of Dracula know him only in his fictional, one-dimensional form: vampire. Yet the truth behind the historical character - voevode, warlord - of 15th C. Romania is at least as equally fascinating as any contrived account of his supernatural persona.

Vlad Dracula faithfully follows his life story as hostage, fugitive, prince, and prisoner, as well as his legend. His principality of Wallachia was caught between two voracious predators: the kingdom of Hungary and the Ottoman Empire. They tried to break Dracula with overwhelming force and terror. But Dracula turned their own tactics against them, and against criminals and factions in his own land, earning the name Tepes - The Impaler - in the process.

He was a strange mix of husband, father, soldier, statesman, and berserker. He annihilated 50,000 people - one-tenth of his own population. Cursed by his native Orthodox Christian church, he indeed evolved into a legend. But even today he is Romania's Robin Hood.

Great topic, but really poorly executed. The performance was flat and monotonous. I was really disappointed.

I don't know if it was the narrator's fault, but this book was really hard to follow. The introduction got me totally lost, and the first chapter didn't do much good.
The narrator's lack of intonation made this book unbearable. All the characters sound the same. Although this is a topic that interests me, this book almost made me lost it.

Not worth the time.

Poorly performed narration took away from the quality of the book. Book reads like a reference book rather than a work of fiction.

I really enjoyed the audio narration for this book, and the fun retelling of history.

I really had trouble keeping up with all of the names. The last chapter was Bela Lugosi 2.0 which spoiled the historical attributes of this fiction enhanced work. All in all it was so good that I will listen to it again and see if I can get the names down better.

An excellent story with factual basis

This was a wonderful story that not only peels back the mystery surrounding this underrepresented historical figure, but it also makes you deeply consider their philosophy and actions. The story has much of its basis in reality and the overwhelming majority of the events in this book are true if slightly embellished for flare. Though the books ending does stray pretty far from the events that happened to the real Vlad Dracula, it ultimately left the reader with a more satisfying ending than the real story. Its a very fun book and an excellent read.

I thought it was a historical book

This is some really good historical fiction based on one of my favorite historical characters. The story woven by Augustyn is excellent and the end is great! The small nod to the popular legend of Vlad's vampirism is twisted just right. So why didn't I give it 4 or 5 stars? Vlad lost at least 1 star because this is the audio edition so of course the narration counts a lot toward ratings. Guardabascio did on ok job but his style, for me at least, didn't compliment the author's work. You will enjoy this book if (like me) you like well researched historical fiction and are intrigued by Vlad Dracula: The Dragon Prince.

Very nice to find one more historical novel on the life of Prince Vlad III Dracula. I get very tired of the vampire fiction and propaganda that is usually associated with this true warrior and hero.

Not what I thought, but still good

I have to admit that this book was not what I thought it would be. I thought it would be a historical fiction based on the life of Vlad Dracul, without the aspect of vampirism. The book did include vampirism, though. That being said, I think the book was really written well, though be warned, it can be pretty graphic as far as tortures are concerned. I thought that the details were really interesting, and the book ended well. The majority of the book focuses on the part of Vlad's life before he becomes a vampire, and that is the part that I was most interested in. I listened to the Audible version, and I would actually be interested in reading the Kindle version because there are a lot of culture-related words that I'm not used hearing, and I tend to absorb the unfamiliar better with the written word. Overall, an interesting book.

The Naration Kills it

Would you try another book written by Michael Augustyn or narrated by Matt Guardabascio?

Some of the facts

Who might you have cast as narrator instead of Matt Guardabascio?

Someone with a British Accent and with a bit more of theatrical talent and soul - this one is like a recorded message - very mechanic and lifeless.

Did Vlad Dracula: The Dragon Prince inspire you to do anything?

Yes - to look for something else.

First, a comment to the Author - "Dracula" means "the Devil" and not "the Dragon" - where did this come from ?! just go to Google translate and you can see it right there Drac=Devil.
Second, the author - not only the Narration is lifeless, but the pronunciation is terrible. Some examples of names pronounced in a very misleading way:
Murat, a Turkish name is not pronounced Miurad but "Moorat"
Mircea - Romanian name is pronounced "Mircha"
Radoo, pronounced Radoo with an emphasis on the "Ra" and not the "Doo"and so on....quite annoying .
I am only at chapter 4 and already lost the appetite to go on listening.
The Narrator need to do some homework before narrating a book.