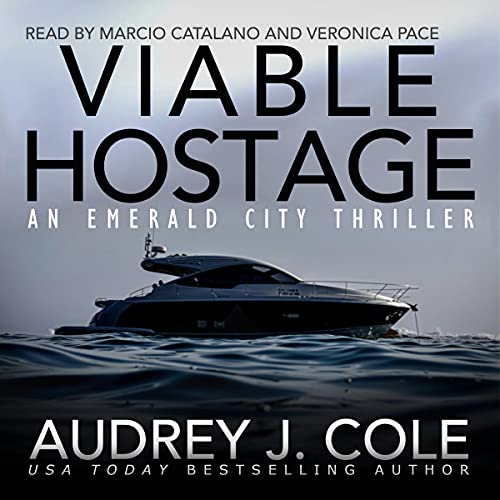 Malorie’s best friend is missing, but no one seems concerned about the wayward medical student's mysterious disappearance - until another student's partial remains wash ashore a Seattle beach....

When Malorie witnesses her best friend and roommate leave a campus bar with a mystery date driving a silver Mercedes, she suspects foul play, especially when Lani fails to return home the next day. Both women, med students in their final year at Elliott Bay University, have a lot riding on the line, but due to Lani’s wild past, no one in her family is worried. When Malorie’s fears for her roommate deepen, she turns to her Uncle Wade, a sergeant at Seattle Homicide.

Within 48 hours after Lani goes missing, the partial remains of a brutally murdered young woman wash up on Alki Beach, and a human hand is found in a crab pot off Bainbridge Island. When one of the bodies is identified as a pregnant, fourth-year medical student, Wade believes there’s a connection with Lani’s disappearance. And, that they might be looking for a serial killer.

Malorie suspects Lani’s kidnapper is someone they know, possibly even one of their professors at the university, a prominent Seattle anesthesiologist whose wife is the president of EBU. But when Detective Blake Stephenson discovers evidence that links another suspect to the professor’s Mercedes, he and Wade must act fast to attempt a wild rescue in the middle of Puget Sound.

This book kept me guessing who the guilty person was. It is a suspense filled thriller you will not be able to put down

Malorie's friend Lani goes missing after a mysterious date. As one of many female med students that have gone missing from the same med program, Malorie reaches out to her uncle at the police to assist.

Audrey did a fantastic job creating a complex and interesting thriller that keeps the listener intrigued and on the edge of their seat. She did her "medical" research well for this book and it was so realistic with and excellent build up to a masterful plot. I thoroughly enjoyed it!

The narrators were great and i loved the energy in their performances.

I recommend this suspenseful and fascinating thriller.

Note: This book was given to me for free at my request and i provided this objective review voluntarily.

This book has intrigue and love and trickery. It also has a lot of fantasy that could be true. Cruelty and greed come kill and grieve.But when you start listening to it you’ve got to stay with it to get to those sweet babies.

Totally loved the plot, the way it was carried out

I have liked these audios so much that I have listen to most of them twice and plan to listen to them more as time goes by. The author puts a little bit of everything in it from thrills, chills, excitement and few surprises. I really enjoyed the plot, just as I thought I had it all worked out the author throws a twist that really surprised me. I thought it was well thought out, giving wonderful twists and turns, that hold your attention from the first page until the last. The killer is a surprise that took me a little while to work out.

The narrators did a wonderful job with the character voices, you always knew who was talking and what they were feeling. I thought it was just as good the second time as the first time. There are no background noise, no repeating of words and no volume changes, it is a very clear audio that keeps you hanging on to every word. They really put true emotions in to the characters, really showing their pain, passion and anger. I really could feel what each character was going through tears, it was amazing how well these two narrators blended well together. I really can’t wait to listen to more of their work.

This is a thrilling listen that holds your attention, keeps you hanging on and is a very hard audio to put down. The plot is well thought out, with wonderful twists and turns, thrilling, exciting with a great ending. I have really enjoyed this series and can’t wait to start the next one. Just the thought of what this book has in it is enough to put chills through you, as the author carries the theme through it you really feel a chill go down you down. It was truly an exciting listen that will stay with me for awhile. My heart really went out to the victims they lost so much but the ending was great.

Viable Hostage by Audrey J. Cole pulled me in immediately. Medical thrillers have always appealed to me, and this one is fantastic. The author wrote characters that are compelling, unexpected twists and several red herrings. Both narrators, Marcio Catalano and Veronica Pace were perfectly cast for this book. They add the right emotions to this listen and really bring the characters to life.

This was my first Audrey J. Cole book but it won't be my last. It kept me on the edge of my seat from the beginning all the way until the end. It was definitely thrilling and engaging. I would highly recommend this book to anyone who loves a good thriller. Marcio Catalano and Veronica Pace did a great job bringing this story to life. I received this audiobook at my request and have voluntarily left this unbiased review.

Viable Hostage: Emerald City Thriller was a great read by Audrey J. Cole. Malorie is witness to her best friend leaving a campus bar with someone driving a silver Mercedes. She suspects that something is wrong with the situation, especially after Lani doesn't return home. They are both busy med students and Malorie knows that something is amiss in Lani's disappearance even though her family doesn't believe anything is wrong. Lani's past as a wild child is making it so that her family doesn't seem too worried. Malorie goes to her Uncle Wade who is a sergeant at Seattle Homicide because she knows something is wrong. A young woman's remains wash up on a beach, they find out that there is a connection to Lani's disappearance when the woman washed up turns out to be a med student as well. I enjoyed reading Malorie's story and can't wait to read more by Audrey J. Cole.

Audrey J Cole is becoming one of my favorite authors! This was a well written book . Kept me guessing and well I loved it .

I received a copy of this audiobook from AudioBoom in return for an honest review.
Short but interesting premise. Good job by narrator.

Story line had me guesting right at the start.

The narrators were good using different voices for each character.

I received this audible free at my request. I'm happy to provide my honest review.

You will become a hostage to this story

You will become a hostage to this story until the end, it is that good I didn't want to pause it for a second. I loved this book. I liked the suspense and spent the whole book trying to work out who the killer was. With plenty of clues I kept changing my mind and it is definitely a story you can listen to again. The characters were likeable and had you rooting for the good guys, I just hope the author plans to write about them a lot more.
When Malorie flighty room mate dumps her at a bar, she knows something is wrong. But Lani has pulled a disappearing act before and no body else is worried even when she fails to turn up for a big family event. Malorie turns to the one person she know she can always turn to her Uncle Wade. Despite his wife about to give birth the Seattle Homicide sergeant goes to the prescient to file a missing person case. Only to learn Lani isn't the only medical student to have gone missing and both girls had the same secret. A secret that only the killer knows about, that is until a body is found. Malorie tries to carry on with her every day life but everybody she use to call a friend begins to look like a suspect and someone doesn't want her or her Uncle looking to hard for the missing girl.
I liked the use of the male and female narrators it added another dimension to the story making it very easy to listen to and enjoyable.
I highly recommend this book.

Really enjoyed this. I would definitely recommend this author, so far I have listened to 3 of her book and each one was well written and held my interest.

Viable Hostage by Audrey J. Cole pulled me in immediately. Medical thrillers have always appealed to me, and this one is fantastic. The author wrote characters that are compelling, unexpected twists and several red herrings. Both narrators, Marcio Catalano and Veronica Pace were perfectly cast for this book. They add the right emotions to this listen and really bring the characters to life.

When Malorie's room mate and friend, Lani, unexpectedly walks out on her when they were out for the evening, then fails to return next day, she is concerned that something has happened to her. No one else, not even her family, seem worried: Lani had pulled similar tricks in the past. But in recent months she had changed. So Malorie speaks to her uncle, a police sergeant, who takes her worries seriously, especially when body parts, later identified as other students from the same medical facility, are washed up or fished from the bay. They are right to be concerned: Lani had, indeed, been kidnapped.

This medical thriller is both well conceived and constructed and, although the actual perpetrator of the grisly procedures is overly easy to identify far too soon, the actual crimes themselves are an unexpected raison d'etre, with the blood and guts aspect fortunately more implanted in the reader's mind than in print. Ms.Cole's medical knowledge adds authenticity to her writing without becoming over technical and the main protagonists are well characterised. Narration is cleverly divided between Marcio Catalano and Veronica Pace, each reading chapters more relevant to the point of view of either Lani or Malorie (Ms.Pace) or the Seattle detectives and police (Mr.Catalano), additionally, giving voice to female or male protagonists within each other's chapters. It was skilfully done and added aural texture to the overall delivery. A good performance from both.

This is a gripping thriller to be enjoyed by anyone who enjoys murder mysteries and serial killers, medical or otherwise. My thanks to the rights holder who, at my request, freely gifted me with a complimentary copy. Not overly lengthy, it was substantial enough to remain absorbing and gripping without getting snagged up with irrelevance. And although containing gory medical subject matter, sufficient to make anyone squeamis, the details, mercifully, are left to the immagination. Recommended